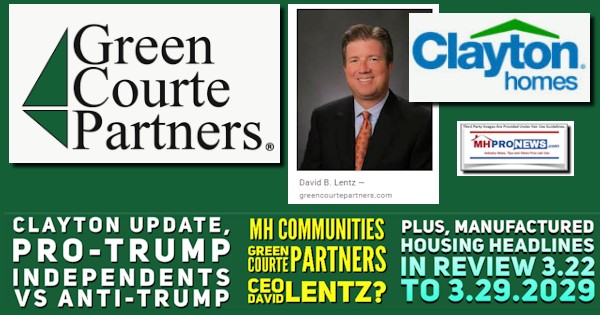 Spin, posturing, virtue signaling, and cheap shot artists are fairly commonplace in our era. Politicians, their spokespersons and surrogates do it.

Something similar can occur with certain business leaders too.

Recently, a message was received that led to a series of communications. That series was provided to MHProNews. At this time, only one phrase will be quoted. It’s a pull-quote – an excerpt – from Green Courte Partners (GCP) President and CEO David Lentz. It focuses on his thoughts regarding President Donald J. Trump. The general topic was the COVID19 outbreak and terminology.

“…stooping so low as to perpetuate the bigoted, sensationalist, self-serving, and fundamentally inaccurate rhetoric that the president [Donald Trump] has so offensively adopted in connection with this global [coronavirus] crisis?

All of it what was forwarded has significance, but the portion is being highlighted for specific reasons that may become more apparent as time moves on.

In America, Lentz is entitled to his views on the 45th American President, even if those views may be hyperbolic and/or factually mistaken. Lentz apparently supports Democratic candidates, which in the USA he is naturally also entitled to do. That political tendency may explain some of what motivated that statement.

There are any number of allegations that are made about the president by political opponents and “never-Trumpers.” Some are routinely repeated, but that repetition doesn’t make them factually accurate.

It is the often exaggerated claims of his President Trump’s opponents on almost anything he says or does that cause many to tune out the more apt complaints when they arise. Because no president, or business person for that matter, is perfect.

Many in the “never-Trump” side of America ‘virtue signal’ by attacking the president. That general statement made, let’s pull the curtain back just a bit on Lentz and his colleagues.

From their own website, that team photo reveals an arguably stunning lack of diversity. It looks like a boys’ club photo, where a token woman was allowed to join in, doesn’t it? Other homogenous elements are visually evident.

Lentz reportedly forwarded that arguably demeaning email to others, some of whom purportedly virtue signaled him back in agreement. Of course. Lentz has authority at Green Courte Partners, and his own messages indicate that he was a purportedly posturing for others he sent those messages too, naturally some did what was expected of them. Meaning, some agreed with Lentz. That might have compounded the issue. Furthermore, how is that different that those who accuse President Trump of surrounding himself with “yes” men?

MHProNews is widely followed by independents, investors and corporate professional readers across the left-right political spectrum for good reasons. As a university researcher from a blue state recently stated publicly: “Tony, nobody does posts like you [MHProNews] do.” That was stated both as a fact and as a compliment.

Back to Lentz’s emailed blast against the 45th president and related. Once more, to a certain degree, comments can be shared in a free society. Facts still matter, but a president is a public figure. There are different standards for potentially defamatory or libelous statement about a person like the president than for the ordinary American. When asked about problematic claims, not unlike the claim often made against Chief Executive he lambasted, Lentz purportedly wouldn’t admit his errors or unfairness – hypocrisy, anyone?

Among the stunning features of this episode is that Lentz – for some time, a well thought of professional – are these:

After 4 years of largely negative mainstream media coverage, tens of millions of Americans remain loyal to the president. There are polling indications that his approval – pre-COVID19 – was steadily rising among black and Hispanic minorities too. His handling of the crisis seems to have been well received by some 60 percent of Americans, per polling, too.

Not only does free speech have legal limits, for a business professional, it should have logical limitations too.

After all, despite the high degree of polarization about the president, he seems well poised to win re-election in November. At times COVID19 has been referred to as the “Wuhan virus,” the “CCP virus” or the “China virus,” much like the Ebola virus was named for a river in the region in Africa it came from. Hypothetically, for whatever reason that one might posit that could cause President Trump not to win reelection, tens of millions will still love the man. Did any of that cross Lentz’s mind or the thoughts of those at GCP?

Millions “hate” “the swamp,” “deep state” and the “leftists” that oppose President Trump and his “America First” agenda. This pandemic could reach a death toll in the U.S. of some 200,000, per Dr. Anthony Fauci.

Some purportedly have and doubtlessly will applaud Lentz’s anti-Trump stance, and some may do so sincerely.

But the point is that others who are either fair minded or already support the president will take a dimmer view.  The odds are good that that will include people in his own team, at their properties, or in their circle of influence. That range of reactions are simply what occurs in a polarized, hyper-partisan epoch where smears might carry weight with partisans.

MHProNews will monitor and report as seems appropriate on such matters. Because in a super partisan environment, it pays to try to work across the aisle as much as possible, even with those that someone may not agree with politically.

That part of the headline addressed, let’s segue to the other point, a data-driven update on our report on Clayton Homes and COVID19.

Data, like quotations, merit context. In an industry that at the time of their investor relations report claimed some 75,000 full time employees – per Cavco Industries, which cited the Manufactured Housing Institute (MHI) – articles in trade media are not likely to have huge readership. Thus any article that gets 10,000 hits is a month is an achievement. To do several of those is surprising.

To illustrate, competing MHInsider – which recently removed their views counter, having purportedly been embarrassed several times by fact checks here – prior to their removing that data publicly showed these results on some posts they published.

Our MHProNews site is far larger on the trade media side.  The evidence available has routinely reflected that the news and views segment of their site are dwarfed by ours on MHProNews. Indeed, the argument can be made that all others in MHVille trade media combined may not achieve our readership levels. Indirect evidence of that is that we’ve published data periodically for years, and it has never been publicly questioned.

For a bit more context, Forbes has one of the larger business sites in the U.S. The report in the screen capture below after 11 months has not yet hit 17,000 total views as of the time shown. 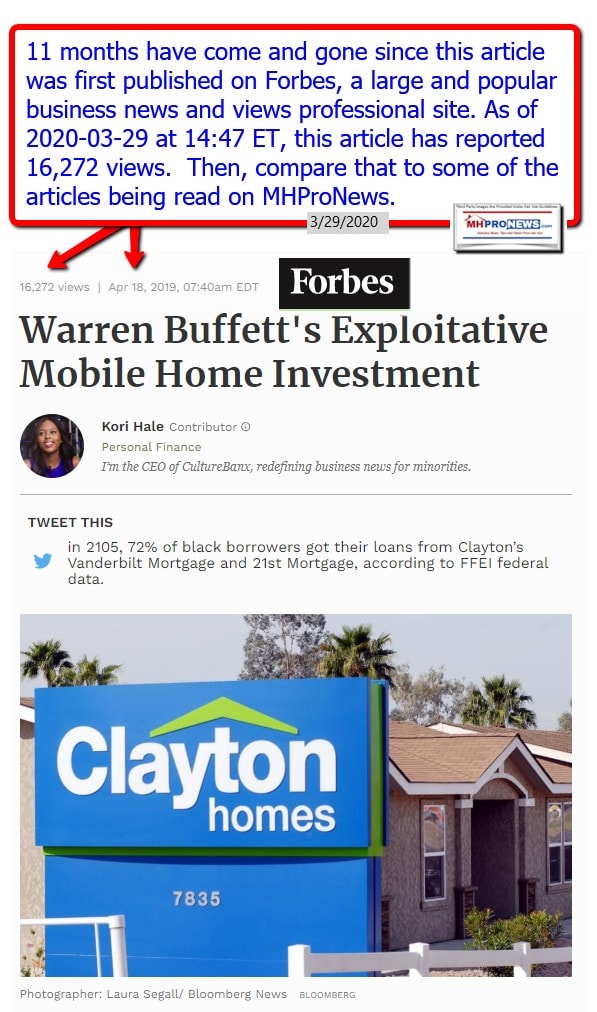 By contrast, we’ve highlighted the hits so far this month on several reports. The second one highlighted has not yet been online for even one full week. That is core of the headline updated insight. Readers like you made it one of the hottest read articles in all of manufactured housing.

Keep in mind that those figures are cumulative for the month to date, per Webalizer:

Then note that our site has over 20,000 reports, articles, fact-checks and posts of various lengths. Because of our SEO, strong traffic and content, there is simply nothing else like MHProNews in all of manufactured housing. That’s a data-driven reflection of this being the runaway #1.

That’s due in no small measure thanks to news tips and whistleblowers. Our thanks to all who have and continue to do so.

As the next screen capture of a Google search below reflects, MHProNews articles on that COVID Clayton Homes rank higher than most others. There are reasons for that, which includes, but are not limited to, higher traffic and SEO outcomes than many others obtain. 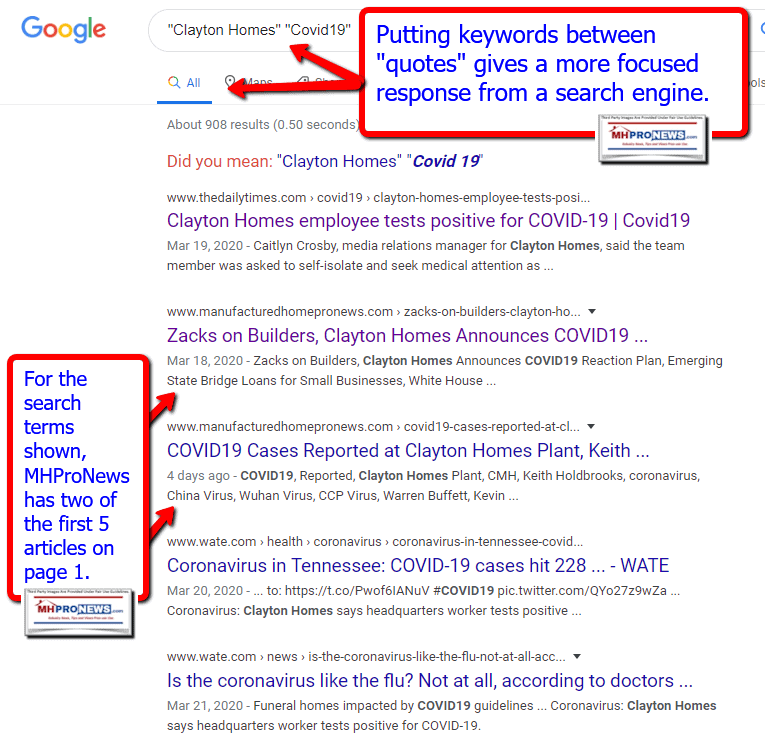 Once more, those totals are from only 1 cPanel – and while it is the largest cPanel on our site for traffic, there are over a dozen serving MHProNews. This month as of the date and time shown above there has been a total of 1,132,936 page views – over one point three two million page views – on that one cPanel. When professional readers and researchers come for one article, they routinely read others. 237,723 is the total number of visits recorded up to the date and time above, again per third-party Webalizer metrics on primary cPanel.

We could demonstrate more, but those are sufficient to make the point that what MHProNews covers often ranks well online.

In the instance of that Case Against Clayton Homes report, some 6 months after it has been published, notice that it has still registered over 16,000 new hits in March on our primary cPanel. Because of reports like that, we are periodically contacted by those who have concerns about Clayton Homes. Perhaps for the same reason, we also get news tips about Clayton Homes, sometimes from those inside the Berkshire Hathaway family of brands.

That is a good segue for teasing a fresh news tip related to Clayton that comes from a Berkshire-connected source. For those who get the implications of what the report will cover, it could raise serious concerns among all other HUD Code manufactured home producers and those who retail their products.

Watch for that report, planned for early this week.

There is always more to know and a range of topics that are often on items found nowhere else but on MHProNews. The data reflects that industry readers across the left-right spectrum, in companies large and small, and from border-to-border are hungry to read what we publish. Our thanks to all who make that possible.

The Latest on the Daily Business News on MHProNews

Again, watch for our latest report on insights from inside the Berkshire family about Clayton Homes.

For those who are sick and tired of how the status quo has been for the past decade plus, whistleblowers and tipsters are welcome to speak up via the link below.

Odds are you and/or your colleague(s) will have more time for reading. This is the time to dive deeper and question what the powers that be in manufactured housing have done – or failed to do – for over a decade. 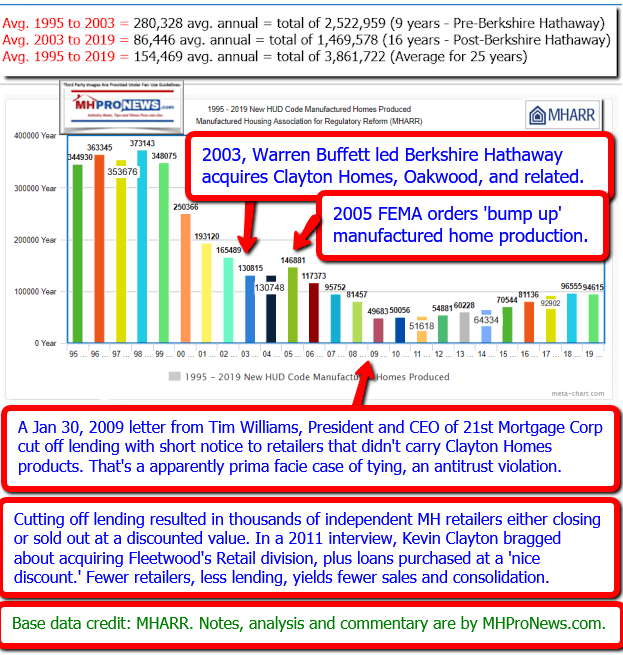 In areas not impacted by mandated closures, retailers were previously reporting mixed results in their traffic. But even those who say that traffic had been steady expected to take a hit. Stay tuned for more, including that promised Berkshire insider revelation.

That’s it for this Sunday installment of “News through the lens of manufactured homes and factory-built housing” © where “We Provide, You Decide.” © (Affordable housing, manufactured homes, week in review, reports, fact-checks, analysis, and commentary. Third-party images or content are provided under fair use guidelines for media.) (See Related Reports, further below. Text/image boxes often are hot-linked to other reports that can be access by clicking on them.)