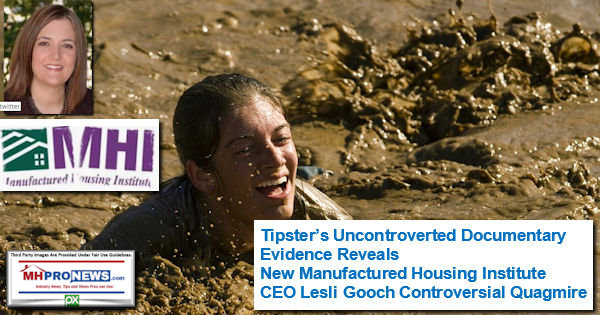 The digital ink has barely dried on the Manufactured Housing Institute’s announcement of their launch of so-called “MHI 2.0.” Meanwhile, the Arlington, VA based trade group has been quickly thrust into a quagmire of controveries related to documents provided via an annoymous news tip.

The documents shown below reflect insider knowledge. They led MHProNews to additional discoveries, that will be outlined herein.

The essence of the evidence is this. While working full-time for MHI, then Executive Vice President (EVP) Lesli Gooch was working for outside interests in the housing field in an apparent conflict of interest (COI). That raises numerous questions relative to:

All that and more will  follow the evidence, insights, analysis and commentary.

In no specific order of importance, the documents reveal tens of thousands of dollars in payments for this lobbying work by Lesli Gooch, Ph.D., all while she has been working ‘full time’ for MHI.

Why has this apparent conflicts of interest not been repeatedly disclosed to MHI members?  The documents reveal that the relationship between Gooch, Capitol Policy Advisors and these other organizations in the documents shown have been ongoing for several years.

If more than one on the MHI staff were aware of this, how could the MHI executive committee not be aware?

If MHI’s executive committee was aware, why would they tolerate lobbying for outside interests that arguably conflict with the interests of manufactured housing?

If MHI’s executive committee gave their consent, what possible advantage could this give to MHI’s members?

Don’t these issues only underscore other evidence or the problematic effectiveness at achieving the stated goals of MHI? Does MHI’s executive committee mean what they say when they claim to want growth, but staff are working for outside interests?

Whether the MHI board of directors/executive committee knew of this or not, the appearances of this are problematic at best, or potentially deceptive and fraudulent at worst.

The documents above led to an online search, which uncovered these additional points of evidence of outside work by Lesli Gooch beyond her work for MHI.

There is an additional message to MHProNews that doesn’t name the person(s) allegedly involved, but claimed that beyond Gooch, there was at least one more at MHI who was purportedly moonlighting for another operation. Given that Rick Robinson was so named in a different message, was it him or someone else?

How extensive are these outside interests by supposed full-time MHI staff?

Robinson’s now gone from MHI, but that doesn’t mean that the concerns have ended. It is arguably one thing that he writes books on the side if it is done on his own time.  But what other legal work might he have done while working for MHI? Would that have been disclosed to MHI’s executive committee? Did those involve conflicts of interest too?

As is evidence from the follow up emails and the FEC items, the series of tips and comments sparked by these documents led to a search which revealed that Gooch is shown in Federal Election Committee filings in 2015 as a principal at Capitol Policy Advisors. Later in 2018, she is shown as an executive for the same firm.

With millions of dollars collectively spent over the years on top level MHI executives, and with so little in terms of measurable results produced by MHI to show for it, doesn’t that add to previously itemized concerns reported by MHProNews?

If top staff at MHI are doing work that involves purported conflicts of interests, in what real sense are they doing the work that MHI purports to be engaged in?

Does such evidence make MHI’s of conflicts of interest that were apparently known by at least some at MHI fit a definition of deceptive trade practices with respect to current or potential new MHI members? Is the evidence of possible fraud? What other legal issues are raised?

By way of disclosure and for balance, MHProNews reached out for comments to see if this might somehow be defensible. An executive with ties to manufactured housing said the following.

“Tony, Based on the information you’ve provided, the tipster must be concerned about conflict of interest. But, on its face, it’s not necessarily a conflict of interest. First, the primary housing association needs to know about the arrangement. Second, the second housing association must not have positions on issues that are opposed to those of manufactured housing.”

To the degree that federal agencies or others know of a top executive of MHI working for competing interests, doesn’t that in itself create an image problem for an already image challenged trade association?

Another source, this one connected to MHI, said: “I know that when Lesli [Gooch] was hired she was a principal partner in another lobbing firm and kept that relationship for several years. Rick may have had relationships with law firms in Kentucky...”

A different message in response to our inquires about these Gooch related documents stated: “I don’t know if the board/executive committee was aware of this. It seemed highly unusual. MHI also had an outside firm doing lobbing…”

Given that Gooch has arguably been credibly accused of paltering…

…and Richard ‘Dick’ Jennison and others have been arguably been demonstrated to have de facto evidence of purported perjury,

…doesn’t this latest document drop only underscore reasons for a formal investigation of MHI, staff and ‘big boy’ members?

The behavior is scandalous on its face. While this is being uncovered, legislation is being introduced into Congress that has been sparked by allegedly predatory practices by MHI members. There are also calls from Congress for investigations into various MHI member connected actions.

Last and perhaps not least with respect to the documents from the tipster.

It seems apparent that whomever sent this news tip was aware of the issue but also wanted to undermine/expose Gooch and/or MHI. That too begs questions, such as who sent it and for what motivations? For instance:

Either way, whatever the motivations, the tips are valued and useful to the interests of the manufactured housing industry at large in understanding the controversies involving the Arlington, VA based MHI.

So too are any other such insights from those in the know. As food for thought, revealing problematic behavior in the poorly performing manufactured housing industry is a potentially medicinal step. It is news tips like these that keep us as the documented runaway most-read news, fact-checks analysis and commentary trade media site in all of manufactured housing.

MHProNews notes that when tips are provided we recommend that company/organizational email or cell phones not be used for that purpose. Use your own phone or email address instead. Insights shared in confidence are so kept, as longtime readers and previous tipsters already know.

The totality of this latest revelations only undergirds prior concerns that arguably merit formal investigations. See the related reports for more.

Given various federal and state agency probes already know that are exploring manufactured housing industry related issues, this matter with Gooch and how business is done at MHI merits no less than a formal probe, preferably from a credible outside agency. The industry’s years of underperformance in manufactured housing can’t be intelligently explained as pure chance.

MHProNews can raise the issues, and provide the documentary evidence and pose the rationale and questions. But it is up to public officials and others who are impacted who must then step up and act upon that evidence. “We Provide, You Decide.” © ## See Related Reports, further below. Text/image boxes often are hot-linked to other reports that can be access by clicking on them. Any third-party images and content are provided under fair use guidelines.)