Not all art-forms are entertaining. Some viewers of the movie that will be unpacked in what follows may walk away liking or disliking “Mobile Homes” for various reasons; one could be that the film hasn’t entertained them. Some artistry is gritty. It may seem harsh or rough. That later type of art can provoke thought, may be inspirational, or evoke other emotions, without being what someone would call appealing, entertaining or lovely. A classic example of that are the crucifixes that hang in churches around the world, in certain art galleries, or in tens of millions of private residences.

There are many reasons we do what we do on Manufactured Home Living News (MHLivingNews) or here on MHProNews.com.

Near the bottom line or core of our motivations will routinely be the aim of effecting positive changes. If the industry is underperforming and misunderstood – as it certainly seems to be based on the data, potential and historic trends – then disrupting the problematic elements that have unjustly bound manufactured housing for too many years is useful. That involves meeting people where they are.

Put differently, to do whatever is right. Tell the truth in as honest, compelling and in various fashions as it can be told to evoke understanding that can lead to necessary changes and reforms.

There are tens of millions of our fellow citizens – plus untold numbers of colleagues and professionals – who are not where you or I would want them to be on a given subject. With St. Valentine’s Day approaching, and as Frank Sinatra famously sang, “That’s Life.”

What can be done about that fact that people don’t understand something? Unless you are too proud, you have to meet those other people where they are.

My idea of what’s romantic or what’s enjoyable may or may not be the same as yours is. That’s life. We didn’t make the movie “Mobile Homes,” but now it’s out there. Why not explore that movie and thereby tap into its potential?

When life hands you lemons, you can pucker up, whine, cry — or make lemonade.

Every evangelist worthy of that title throughout time knows that you meet more people when you meet them where they are. God came looking for Adam and Eve, that first couple was ‘hiding’ after eating the forbidden fruit. The Creator set example for the pattern to be followed by the prudent and humble.

This type of approach isn’t without risks. It merits explanation to increase the possibility of understanding. But it is arguably a worthwhile test, as our featured focus portion of the report linked below makes plain.

When we first pondered the topic of the Vladimir de Fontenay directed movie, “Mobile Homes,” several dynamics were considered.

For example. Regrettably, there are several movies or TV shows in recent years that depict mobile or manufactured home living and/or our industry’s professionals in a problematic or bad light.

By contrast, here was this controversial movie by an acclaimed director, called “Mobile Homes.” While there is plenty of dark imagery in his tale, that’s part of the director’s intended contrast between light and dark. He said as much himself during the famous Cannes Film Festival Q&A following the screening of Mobile Homes, as our video laced report linked below attested.

For the director de Fontenay, that new manufactured home was like fresh snow. White. Clean. Pure. The director-screenwriter said as much. The manufactured home – “mobile home” – represented a second chance for those who need it. While we certainly don’t have to say that this is the only possible vision for manufactured housing, that ‘second chance at life’ market would be a bigger one that we currently serve as measured by total shipments and sales.

The manufactured home, the refurb work, the retail center, and the factory scenes in de Fontenay’s film all had positive messages involved in them. How often has that happened in recent years in any other studio production that used our industry as a backdrop in any fashion?

So, on the one hand, there is a product placement vantagepoint. That’s outlined in the featured focus segment of the market report linked below.

Then, there are video clips, that director’s Q&A video at Cannes, plus the full length movie found as part of our report linked below. If you’ve not seen the movie yet, or saw it and perhaps didn’t ‘get it,’ check it out with this commentary and the one linked above in mind.

We should be grateful at some level that director Vladimir de Fontenay framed the “Mobile Homes” portion of the otherwise rough and discomforting at times movie as he did. 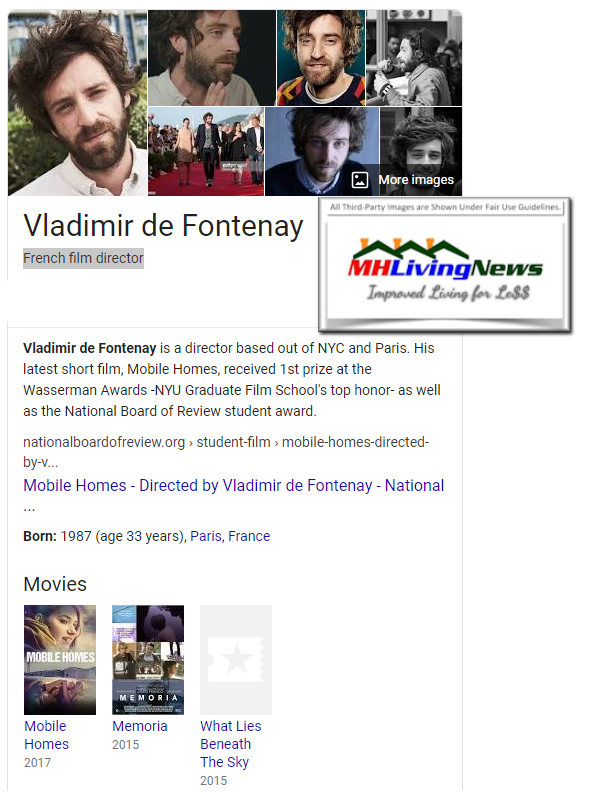 The rabbi named Saul who became the Apostle of Jesus known as Paul went to the pagan Areopagus to preach the Gospel. Why? In so many words, Paul said that’s where the people were. He explicitly cited pagan thinking to attract people to the Gospel. It worked on some, is what that portion of the Good Book says. See that account in Acts 17:16–34. If you lack a bible, just Google “Acts 17:16–34” and you’ll get the text online in seconds.

Why are we doing this “Mobile Homes” movie test? As noted, it’s not without risks. But that’s where some people are. We will meet them there. It will take some time. But we’ll plan to periodically let people know how this test goes. As a closing thought, the character of Evan is intelligent, manipulative, abusive and persistent – someone who even uses sex to get his way. Hmmm…that character imagery – uncomfortable as many will find it – might remind us of some people in our profession, or others. ##

“We Provide, You Decide.” © ## See Related Reports, further below. Text/image boxes often are hot-linked to other reports that can be access by clicking on them. Any third-party images and content are provided under fair use guidelines.)