MHVillage and the Manufactured Housing Institute (MHI) ‘partnered’ to produce and publish on June 9, 2020 a new infographic that purports to present “2020 Industry Trends in Manufactured Housing.” The first portion of the fact check by Manufactured Home Professional News (MHProNews) reported at the link here documented clear errors. One of the sources of that error admitted in writing that the information published by MHVillage and their ‘partner’ MHI was incorrect. That calls into question, how accurate are other parts of the MHVillage/MHI claims? This fact check will explore that question. Additionally, this will ask far more important questions. First, the fact check using information from MHVillage and MHI.

This initial portion of this fact check will be easy and clear cut.

The first image below is that portion of the MHVillage infographic that is being examined for accuracy.

Next, is this image found on the MHI website on 6.24.2020 and re-checked today. It covers the same information that MHVillage published above, which MHVillage says was provided by MHI.

The data point on the two images clearly are not in agreement on the number of plants producing new HUD Code manufactured homes. Then look at the third infographic, also found on the MHI website today.

Which of the data claims from the 3 different infographics is correct? Or are any of the infographic data claims correct on the highlighted items? MHVillage and MHI have not yet responded to inquiries. If or when they do, an update will be provided to those readers who want to know – why simple data can’t be accurately and consistently presented by self-described industry leaders?

Which brings readers to Part I of this periodic fact check. See the report linked below on what is arguably an even more telling fact check.

MHProNews has periodically done research that fact-checks various claims by MHI and what MHVillage’s blogging and publishing affiliate produces. They say about themselves that they are “the premier trade journal for the manufactured housing industry…” Really? The word “premier” means, among other things, “the best.” Both MHI and MHVillage make such claims. If they truly are ‘the best,’ then why didn’t they fact check their own material before publishing obviously self-contradictory and demonstrably inaccurate information?

While some of the inaccurate and contradictory information requires expert eyes or a dedicated journalist interested in facts, some of it is self-evidently wrong just by looking at what they published.

Why Accurate Facts and Willingness to Correct Misinformation Matters

Investors, industry professionals, and public officials are among those that turn to such data and claims, in part because it is being presented to them, per informed sources. That raises professional, ethical as well as legal questions when information presented is knowingly inaccurate.

Leadership at MHVillage were contacted about issues and concerns related to their infographic. Why isn’t their touted infographic already corrected? Why haven’t they bothered to look at other parts of their infographic, to double-check if they reflect accurate or inaccurate information? Additionally, MHI and their staff and elected leaders were contacted about other issues related to industry and their performance. Why won’t they stand up publicly to discuss and defend their track record during an affordable housing crisis?

Whatever answer one wishes to give to fill in the blanks to such questions are sobering and eye-opening. 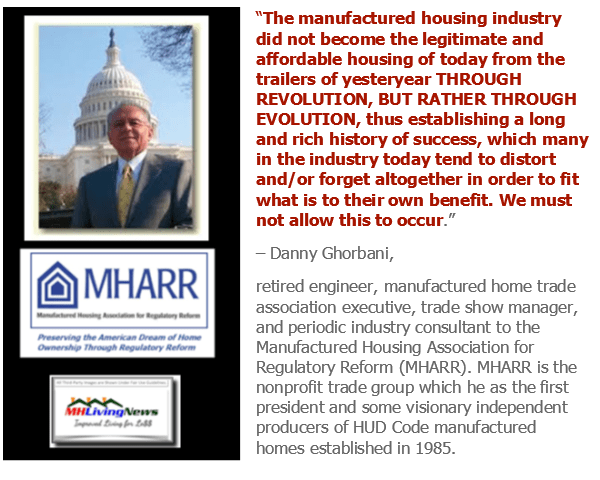 To be fair, some of the information on the MHVillage infographic appears to be accurate, while others are clearly inaccurate or self-contradictory. MHI has the same problem as their “partner” MHVillage does, depending on which infographic is considered. Where is there self-respect? Where is there industry respect? Why don’t they correct their errors when they are discovered?

Being big isn’t always the same as being ‘the best.’ For example, the Manufactured Housing Association for Regulatory Reform (MHARR) doesn’t claim to be bigger. But they do strive to get their facts straight before sharing them.

Which is why MHARR reports, fact-checks, analysis, and commentaries on issues like those linked above and below are useful. They identify significant issues, fact check, then routinely provide action steps that could correct and advance manufactured housing independents.

One point that is accurate from the MHVillage infographic shown above is that despite the obvious value-proposition of manufactured homes during an affordable housing crisis, manufactured housing production and sales declined in 2019 vs. 2018. A technique of manipulation known as paltering, per experts in psychology and sociology, is at times used by those who strive to improperly influence and mislead others. Paltering includes a mix of truth and false or inaccurate information.

Among industry trade media, only MHProNews has done an authentic ‘state of the industry’ types of reports for years. It has been said that imitation is the most sincere form of flattery. The fact that MHVillage and their “partner” MHI are producing flawed information while the industry suffers declines during an affordable housing crisis is a warning flag.

Who are those harmed by these methods?

Answer? The independents, consumers, more modest investors, and those involved in public policy that may rely on information that is a mix of accurate and inaccurate claims.

Who benefits from those inaccuracies? Short answer? The consolidators of manufactured housing that are more interested in building their respective moats than they are at growing the industry. Note: Part 1 of this periodic fact check series is shown below. It raises serious issues.

Programming Notices and Teaser: MHProNews has been provided with hundreds of pages of information by a federal official. That will be the subject of one or more reports in the near term.

See the related reports following the byline and notices.

The point is that the warning signs are there for those willing to look. There are known federal and state investigations for the same reasons.

The industry is underperforming. There has to be a logical reason for that during an affordable housing crisis. With respect to MHVillage and MHI, a case can be made that they are not part of the solution, but rather are part of the problem. The evidence is there for years of questionable or inaccurate information – and misinformation can’t be useful to the industry.

The reason this site is so highly read by MHPros is arguably because we gather the facts, data and provide analysis that no one else in the industry’s trade media dares publishing. That’s likely why were are the documented runaway #1 most read and largest.