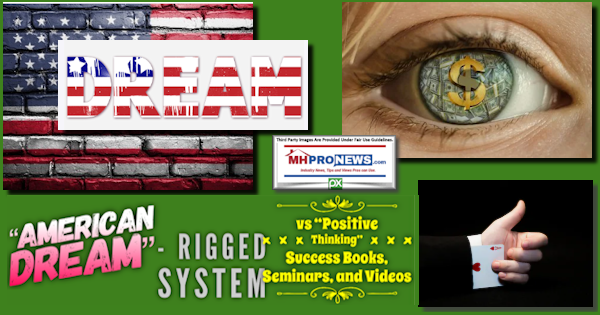 The headline in the strict sense is not an either/or proposition, but it does raise an issue that too few ponder. In the land of opportunities, if the “American Dream” has been rigged as some argue, to what degree is positive thinking useful? When people as apparently different as two-time Democratic presidential nomination hopeful Senator Bernie Sanders (VT-I, self-described Democratic Socialist) and President Donald J. Trump both make the argument that the system in America is rigged, to what trump extent is positive thinking and all those books, CDs, DVDs, tapes, downloads, seminars and success training services useful?

Zig Ziglar, Tony Robbins, Tom Peters, Napoleon Hill, Norman Vincent Peale, Dale Carnegie, Tim Connors or others – were they ‘right’ or where they to some extent ‘lucky’ that they caught their breaks while the system was ‘less rigged?’

In the manufactured housing industry, there are thousands of businesses that went years – sometimes decades – beyond the tough first- through fourth-year that in any profession it often takes to make a profit and be ‘successful.’ By the time a business turns five and is profitable, it’s to a significant degree a success story. The manufactured home industry had thousands of operations like that, from one location mom-and-pop retailers to multiple location operations. Something similar could be said of other professions too.

This article won’t go into depth on how the system is rigged, or why those 10,000 +/- retailers are no longer in existence. The related reports linked from this post do that so well – no bragging – that some individual articles get more ‘hits’ than there are full time workers in the manufactured housing industry. “The Case Against Clayton Homes” is one such uber-read report.

But two new and different report linked from this article gives a related take on the issues too. It’s Dirty with a capital D. But following those links is a brief answer to the headline issue.

Stating the obvious can bring clarity to an issue. Given the affordable housing crisis, manufactured housing, if properly understood, should have been soaring for over a decade. Independent researchers such as Eric Belsky said as much. But instead of becoming the dominant form of housing in America, instead of offering a renewed hope to millions who are chasing the American Dream, the wildly misunderstood manufactured home (MH) industry was tepid to deadly for far too many among the MH industry’s independents.

If someone believes the evidence that the system has been rigged in the MH Industry in ways that have largely managed to dodge serious legal consequences, then in that instance, how is positive thinking useful? It depends. It certainly can be. But if someone is relying only on positive thinking, that is a different story.

Because if someone is not fully aware and properly focused on understanding and navigating the ‘traps, pitfalls and swindles’ found in MHVille for much of the last two decades, all the positive thinking in the world might not be enough. The evidence is clear to those who look at the facts objectively. Honest business with good reputations failed by the thousands during an affordable housing crisis. That in itself should be the study of academics, objective policy advocates and authentic journalists. The case can be made that they failed because the system was rigged.

In part, someone must be aware of the tragic realities of the manufactured home industry.

My bookshelves have scads of volumes on marketing, selling, success, from classics like “How to Win Friends and Influence People” to more contemporary writers and the like in between. Additionally, there are various recordings that I could listen to while driving. I’ve been to numerous seminars and given several myself. Are such things useful? To some degree, yes. But once, more, if the information is not grounded in reality, if it is all mentally just ‘blue skies’ and someone tries to ignore the reality of dark and menacing clouds, then expect to get wet or worse.

It isn’t negative thinking to take an umbrella when there is a forecast or signs of rain. Rather, having that umbrella is practical.

Had we not fought the fight against a rigged system operating in our industry, I’m not at all confident that the outcome would have been as good as it has been here at the enduring decade plus success of MHProNews. Perhaps more important to surviving and succeeding in a rigged system was the grounding of prayer, faith and the rich tradition of historic examples that date back to the biblical era. Because freedom is never free.

It is Memorial Day weekend. We celebrate the lives of those who fought and died for our political freedoms. Their memories and the sacrifices they, their comrades and families made are serious ones that merit respect. That’s why we recall them with honor.

Today, we are fighting an entirely different kind of battle than what was fought in World War II. The battle today is against the traitors among us here in the U.S.A. There are people who arguably know they are traitors. Then there are others that may not realize it, but are walking in lock-step with the messages that traitors profess but don’t live up to themselves.

There are con men and traitors who posture one thing, but do something entirely different. People that keep making the same bold promises time and again, but oddly fail to deliver on them. They are in manufactured housing. They are in other parts of American society too.

The battle today is one of clarity of thought and the will to win against those who can smile and lie at the same time. Those smiling liars can look you right in your face, or in a video camera, or microphone, and deceive with confidence. That is the nature of the con-man who is also a Quisling.

The first step in problem solving, said positive thinker Zig Ziglar, is accepting the reality that there is a problem.

Once acceptance of reality is accomplish, next, one must objectivity discern what the truth of the problem is. Once that reality is clearly understood, because it is simple yet complex, then the next step is this.

Armed with truth an action plan can be crafted and put into motion. But as in any war or battle, ongoing updates in ‘intelligence’ or information is necessary.

In a war against a rigged system, barring a miracle, it will take a tough fight to win. It isn’t going to be quick, unless you want surrender and to live like they do in Communist China where you have no practical rights unless you blindly obey.

Communist Chinese leaders have made similar public statements. There are Americans who by habit, will, or ignorance have been ‘investing’ or ‘doing business’ in China. There are times when what Warren Buffett says is simply true. You can’t make a good deal with a bad party or person.

It’s a war of ideas, manipulation and control. The war aims at others dominating you and those you love. Freedom is never free. But the positive thought for today is this. Others have come before us and won similarly difficult wars that often took years. If they did it, that’s good reason to believe that you and I can do it too. 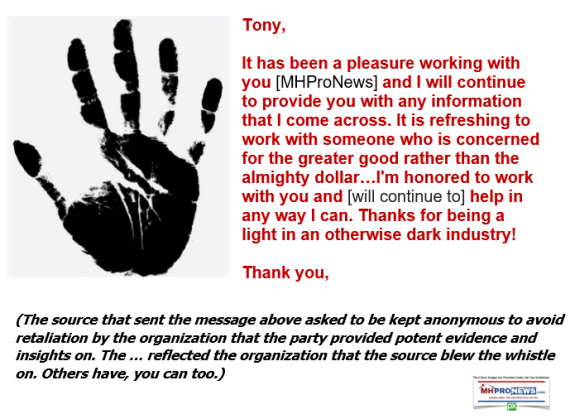 Notice: Some of our most important and
popular reports are the result of readers news tips.

Whistleblowers – your tips can make a difference when shared with us.
You can be anonymous.

P.S. To learn more about the topic above, see the related reports below. That’s a wrap on window into “News through the lens of manufactured homes and factory-built housing” © where – “We Provide, You Decide.” © ## See Related Reports, further below. Note that text/image boxes often are hot-linked to other reports that can be access by clicking on them. Any third-party images and content are provided under fair use guidelines.)