On the day before a week-long manufactured home industry business trip, the top of my to-do list would not normally have included going to a men’s conference. But a retired-younger Army major and former law enforcement officer invited me to go, so that’s where some of these thoughts came from today.

The drive time and breakfast with the major – let’s call him Jay – was as long as the conference itself.  The men’s group’s featured speaker was named Justin Fatica. Fatica is a father of 5 and founded “Hard as Nails” Ministry.

While it the verse that follows doesn’t mention nails, this was part of their promotional literature.

“Where one alone may overcome, two together can resist. A three-ply cord is not easily broken.” Ecclesiastes 4:12.

That seemed like a timely notion for thousands of manufactured housing industry professionals, many of whom are obviously men.

As the major shared various stories, I made notes, much as I did at the morning men’s conference itself. From 6 AM to 2 PM, it was pretty much like a full day for many Americans.

There was talk about great coaches, such as Jim Valvano or Vince Lombardi. But there were also bits of military lore, that – like coaching – each have their applications for business, professional, personal, or spiritual development.

The challenges of daily living, the pressures and hoop-jumping of life, were among the topics. I learned that part of the genius of a conference like this is that attendees could relate easily to what was being said.

Among the other themes and one-liners?

Major Jay was apparently in ground forces, the infantry. Overcoming obstacles is a key aspect to what military and business leadership are about. Jay, like the speakers, wasn’t into fluff. He said stuff like

As a “land-navigator,” Jay used to overcoming under dangerous ‘under fire’ conditions.  He told me if I ever wanted to go shopping for fire arms, to give him a call, he knew his weapons.  The retired major also shared a lesson he learned from another officer about land-navigation in treacherous conditions, which was “Slow is smooth. Smooth is fast.”

But Major Jay also said he cannot watch someone doing a good job of singing the national anthem without tearing up. As odd as it sounds, from this big man, that sounded pretty manly too. He loves his country, his family, his God.

He shared  a story about listening to some boring person, and quipped that “Luckily my friend Jack Daniels came for a visit that night.”  Younger military man, a daughter in grade school, but he moved slowly due to his various wounds. A good, ‘man’s man.’

Jay told me that he his family bought a new site-built home not long ago. Without going into details, he implied it was a less than a satisfactory experience. I mentioned an ABC News story on that, and that clearly perked his interest, see that, linked below.

ABC News did the following exposé about the host of problems found in the conventional “site-built” housing industry. The above is one of many such videos. See another example in a local news video, below. This isn’t to pick on what D.R. Horton, or any other conventional ‘site-builder.’

We then spoke about manufactured homes and the industry’s challenges, internal and external. I didn’t sugar coat stuff. Jay listened, asked questions to clarify points in his own mind. He got it quickly. He said he wanted to learn more, and he clearly meant it.

Our industry needs strong men, but strong women are needed too for the battles ahead.

The conference in hindsight seemed like good timing after all. One person, one business going it alone in an environment of sharks has a tougher time.  Two businesses, better.  A three-cord rope is harder to break.

Smart soldiers lean on each other. If there is an enemy that seems bigger and more powerful, why go it alone?  Why hope to be the last one eaten?

There is a need in our industry for a ‘whatever it takes’ – in an honest way – mentality. Major Jay was blown away listening to the value of our homes, his head subtly nodding in agreement at price, safety, energy and other key points. Our industry needs to reach millions of people like Jay, not the under 98,000 new home sales as was the actual (weak) performance for 2018.

But Jay also rapidly got it about the internal and external battles our industry faces.  That’s encouraging.

Whatever it takes. Manly stuff — or strong woman stuff too.  Jay spoke with deep affection and respect for his wife.

There is power and safety in numbers.  We need others who know what rocky ground we are navigating, often in the face of hidden or open enemy fire.  With those thoughts in mind, see the latest on the Masthead.  Check out the other stories linked below that posted during the week from March 17 to 3.24.2019 at MHARR and the Daily Business News.

What’s New on the Daily Business News from MHProNews 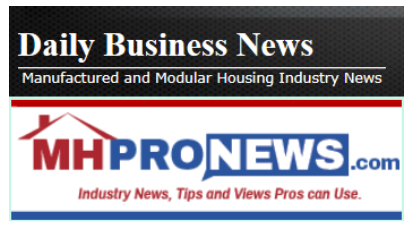 Cha-Ching! Manufactured Housing Made Simple in 2019

Cha-Ching! Manufactured Housing Made Simple in 2019

That’s the MH Industry “News, Tips, and Views Pros Can Use” © for the week that was, here where “We Provide, You Decide.” © ## (News, commentary, and analysis.)

Sign Up for our headline email news updates Today!