Once a month, the Institute for Building Technology and Safety (IBTS) provides for the Department of Housing and Urban Development (HUD) the totals for manufactured home production and shipment in all 50 states. Those figures are provided to various companies and nonprofits, including the Manufactured Housing Association for Regulatory Reform (MHARR).

MHARR’s report and brief analysis of the latest data speak for themselves. Following their report on September 2020 production and shipment data for new HUD Code manufactured homes will be additional information, MHProNews analysis and commentary.

Washington, D.C., October 5, 2020 – The Manufactured Housing Association for Regulatory Reform (MHARR) reports that according to official statistics compiled on behalf of the U.S. Department of Housing and Urban Development (HUD), HUD Code manufactured housing industry year-over-year production declined in August 2020. Just-released statistics indicate that HUD Code manufacturers produced 7,933 homes in August 2020, an 8.2% decrease from the 8,646 new HUD Code homes produced during August 2019. Cumulative 2020 production at the end of August 2020, now stands at 61,583 homes as compared with 62,463 homes produced over the same period in 2019, a decrease of 1.4%.

A further analysis of the official industry statistics shows that the top ten shipment states from the beginning of the industry production rebound in August 2011 through August 2020  — with cumulative, monthly, current year (2020) and prior year (2019) shipments per category as indicated — are:

The August 2020 production data moves North Carolina ahead of Alabama in the cumulative top-ten list.

With 2020 cumulative industry production heading into the fourth quarter currently down 1.4% from 2019 – which itself was down 2.0% from 2018 – it is evident that unlike other segments of the housing industry, which have experienced a strong rebound from lower sales tied to COVID-19 lockdowns and other factors, manufactured housing production and shipments continue to be plagued by persistent post-production issues which the industry has failed to resolve.

Despite industry manufacturers producing their best, most modern and most affordable homes ever, zoning and placement discrimination, as well as baseless constraints on the availability and competitiveness of consumer financing, have kept sales of mainstream HUD Code homes at artificially suppressed levels.  MHARR thus continues to believe and maintain that unless and until these continuing post-production failures are confronted and resolved, the industry’s recovery as an unparalleled affordable housing resource for lower and moderate-income American families will continue to needlessly lag.

“Homebuying is still going strong heading into the fall, with people rushing to lock in record low mortgage rates and sign contracts to purchase homes in August,” said left-of-center CNN in a report on 10.5.2020.

Yun noted that pending contracts are at an all-time high, that won’t necessarily translate to a record number of home sales. Not all contracts lead to closings.

CNN Business also noted that due to housing affordability challenges, the sales of condos may surge.

Still, pending home sales are outperforming many pre-pandemic averages, said NAR’s Yun. Without enough available homes for sale to meet the demand, the housing recovery will not be sustainable.

“Home prices are heating up fast,” Yun said. “The low mortgage rates are allowing buyers to secure cheaper mortgages, but many may find it harder to make the required down payment.”

Rephrased, what Yun and the NAR data reflects ought to signal huge opportunities for factory-built housing, including, but not limited to, manufactured homes. There is a range of data from mainstream housing – like the above – as well as from the RV or automotive industries that reflect a strong recovery since the economic shutdowns began in the U.S. in the mid-March, 2020.

What the data reported by CNN thus underscores MHARR’s contention that “baseless constraints on the availability and competitiveness of consumer financing, have kept sales of mainstream HUD Code homes at artificially suppressed levels.  MHARR thus continues to believe and maintain that unless and until these continuing post-production failures are confronted and resolved, the industry’s recovery as an unparalleled affordable housing resource for lower and moderate-income American families will continue to needlessly lag.”

These facts betray the claims of MHI defenders, such as Tim Williams.

Through mid-morning on 10.5.2020, the report linked below is the most-read report in October on MHProNews, which is the runaway largest and most read trade media in the industry.

Industry professionals, investors, affordable housing advocates, public officials, researchers, and others want to know why manufactured housing is underperforming. MHARR hits on some key issues, and the previously called out MHI by name for their failures in obtaining the implementation of favorable federal laws that have existed for some 12 to 20 years.

To be blunt, MHI, their backers and their mouthpieces are peddling pure propaganda.

The using MHI as cover scheme is clever in as much as it is largely hiding in plain sight. It takes months and years of carefully tracking the words of MHI and leading companies such as Clayton Homes, Skyline Champion, or Cavco Industries – to name but a few of the ‘big boy’ brands – to see the patterns emerge. Cavco went through month after month of grueling costs for legal and compliance related issues since they announced in early November 2018 that the firm and their then leaders, Joseph “Joe” Stegmayer was issued a subpoena by the Securities and Exchange Commission (SEC). But even recently, a new SEC notice was issued, this time to another ranking Cavco official. How many times does a firm have to seemingly break federal laws before numbers of investors or industry professionals realize that they are willing to bend the rules when it suits them?

Nor should Skyline Champion (SKY) escape scrutiny. To their credit, at least they pivoted following the revelations exclusively made by MHProNews, thanks to whistleblowers in their network.

Clayton Homes and their affiliated lenders are arguably the most blatant of all. The report linked below recounts a history of allegations from customers, public officials, and company insider revelations. It is routinely accessed, with thousands of new hits every month, even though it was first published a year ago. Rephrased, this one article may well get more traffic than some or all rival publishers in manufactured housing get on all of their new reports in a given month.

The communities sector has their own consolidators who are using purportedly aggressive tactics that state officials have balked at and mainstream media have reported on.

The ones linked above and below are just some that have been featured in recent reports.

Similar such aggressive tactics seemingly resulted in a tragic murder of a community manager. Access the reports above and below to learn more by clicking on the image or the link below the image.

How many times will land-lease community managers or other community employees watch one of their own get hurt or killed before whistleblowing occurs there?

A recent message from an MHI insider to MHProNews alleges improprieties involving President Mark Bowersox and Lesli Gooch. That follows revelations last year that MHI elected leadership ignored, that reflects Gooch’s conflicts of interest on company time. Put differently, Gooch – and per that source, Bowersox – are continuing a pattern that was revealed by documents provided by an MHI insider whistleblower to MHProNews.

The totality of evidence found in reports like the ones above results or that follow result in specific, common-sense and sobering takeaways.

It is a disgrace that the industry’s self-described leaders allow the industry to flounder. There is only one logical reason that they are allowing this to occur. The publicly traded firms have said it themselves, in their own words. They are consolidating – acquiring businesses in – the “fragmented” manufactured housing industry. Note that in the Skyline-Champion investor package, they make M&A their number one growth plan, even though only some 20 percent of the industry’s production remains to be consolidated.  They still refer to that as “highly fragmented.”  Note the common thread for virtually all of these firms is that they are MHI members.

For years, Marty Lavin, an MHI award winner, quietly said. ‘Pay more attention to what people do than to what they say.’ He also said, ‘follow the money.’

Liars lie. Con artists use charm, but they are still about swindling people out of something valuable. 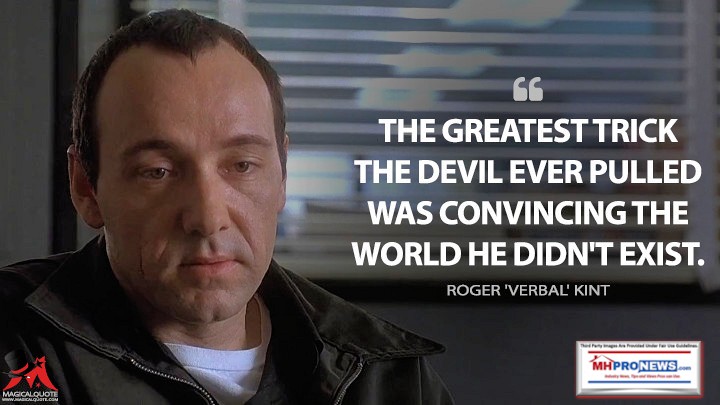 While other sectors of the U.S. economy are also being consolidated, there are reasons why this shouldn’t be occurring in manufactured housing, because the laws exist that should be fostering growth and more businesses and investment into affordable housing, the best example of which on paper should be manufactured homes.

Then there is the travesty of the so-called research and focus groups done on behalf of MHI that claims to be promoting their new class of manufactured homes renamed last year as “CrossModTM” homes. If their research was valid, why are so few of those homes sold? Why are those “CrossModTM” homes not flying off the factory floors during this high-demand period for even more expensive homes?

Last but not least. The image of the industry is also being undermined, often by MHI members or those who take ‘classes’ and ‘boot camps’ from MHI members.

Before closing, lets note anew for readers new or longer-term that not every MHI member has a shady reputation. Some of them have a good track record. Nor are all those working for so-called black hat, overly aggressive, or predatory brands bad people. Some working for companies even become whistleblowers, as several MHProNews exposes over the years have noted.

That video by John Oliver features numerous MHI member firms. Is it mere coincidence that MHI members are so often the ones that get spotlighted by public officials, loutline explains why MHARR said, as the headline noted, “Sales of Mainstream HUD Code” manufactured homes are “Artificially Suppressed.” During an affordable housing crisis, the industry should be doing far better. The only thesis that makes sense about the years of underperformance would be the one that aligns with the facts shown and linked. The industry is being subverted from within.

A key part of the solution is to create a new post-production trade group that will work with MHARR and others of good will in order to implement the good laws that would foster serious growth.

There is always more to know. Stay tuned with the runaway largest and documented number one most-read source for authentic manufactured home “Industry News, Tips, and Views Pros Can Use” © where “We Provide, You Decide.” © ## (Affordable housing, manufactured homes, reports, fact-checks, analysis, and commentary. Third-party images or content are provided under fair use guidelines for media.) (See Related Reports, further below. Text/image boxes often are hot-linked to other reports that can be access by clicking on them.)

Barriers to Entry, Persistence, and Exiting in Business, Affordable Housing, and Manufactured Homes