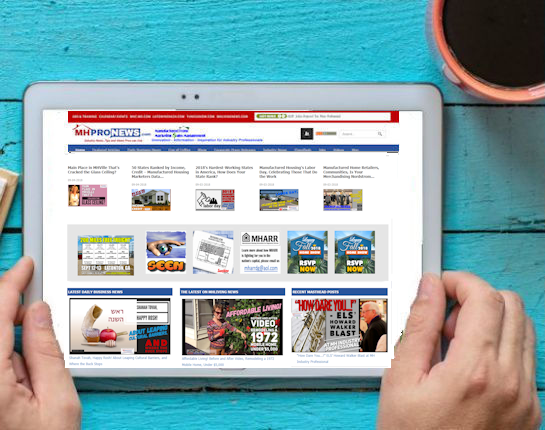 There are precisely three ways to influence any organization of whatever size.

Influence can only occur:

That’s the clarity of applied logic or common-sense reasoning.

Because it works. Reasoning and stories influence people.

Let’s be clear. Some will run from reason or will avoid topics that make them uncomfortable. But the subconscious mind, once exposed to a fact, doesn’t readily forget it. Facts and evidence may get drowned out for a time, but reality has a way of making a comeback.

Pain in the body is a signal that something is wrong. Pleasure and pain can both be manipulated. Emotions used correctly motivates, used incorrectly, can be tricked and manipulated. Humanity was created with both emotion and the ability to reason.

Carrots, sticks, and repetition are how people get attracted, maneuvered, or manipulated. But a cogent presentation of facts and evidence can cut through the noise with some, and those people can in turn influence others.

Let’s start with an example outside of professional associations, but that still matter to everyone in MHVille. Manufactured home (MH) resident groups.

MH resident groups can be right, wrong or a combination of those.

But right or wrong, MH resident groups clearly have influence. Here are a few examples:

Knowing this about resident groups, there are state associations that work with them as best they can.

MHARR has had contact with them too, on issues like the Duty to Serve (DTS) Manufactured Housing mandated for the Government Sponsored Enterprises (GSEs or Enterprises) of Fannie Mae or Freddie Mac by the Housing and Economic Recovery Act (HERA) in 2008.

As those who have sat in MHI meetings know, MHI leaders have often cursed resident groups. But like them or not, NMHOA, MHAction and their state affilates are a reality. Better deal with them, or one must find a way to replace their influence with something better.

As community owners in numerous states have learned, resident groups can’t be ignored. If they are ignored, it is only at a cost. So, you don’t have to like MHAction or NMHOA to realize they’re a reality that influences bottom-lines literally from coast-to-coast.

But up until recently, who has thought to challenge them in publicly in a debate? Or what about supplanting/replacing them when they won’t see reason on issues that can improve the lives of residents they claim to care about, as well as businesses like yours?

Let’s look at another example, from outside or MHVille. Political parties and candidates.

What government at all levels does or doesn’t do absolutely influences businesses of all sizes. That’s true in and beyond manufactured homes.

So, MHProNews uniquely looks at “News Through the Lens of Manufactured Homes, and Factory-Built Housing.” ©

You ignore politics at the risk of your investments of time, talent, and treasure.

You might have the best product, service, value, and the happiest customers. But government action or inaction on an important issue can strengthen, weaken, speed, slow or destroy your business.

The power to tax, and the power to regulate involve are the power to destroy. That’s based on a Supreme Court justice’s famous statement, shown below. That’s reality. 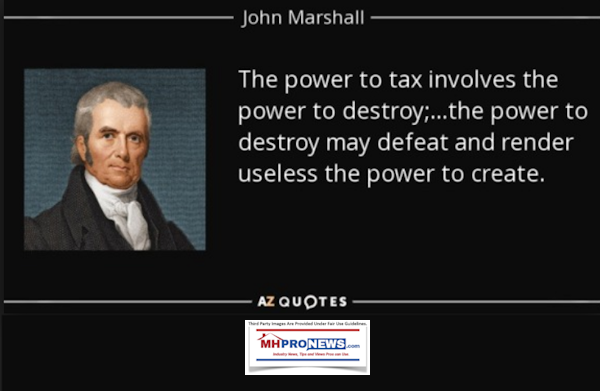 Like it or not, political parties, resident groups, associations, and media all influence government.  Government in turn sets the rules that can make or break your business.

So, if you want to be successful long-term in business:

1)    you have to go beyond product, service, marketing, sales and technology. You have to be aware of, and hopefully influence those, that influence others.

2)    If you don’t pay attention to those outside factors, others are and will set the rules of the game in ways that will help or harm your business.

3)    The same is true for homeowners. Whatever the intent of their members, NMHOA and MHAction arguably advocate for things harmful to manufactured home owners and businesses alike. Proving the harm of radical activists by a cogent use of facts, evidence, and reasoning is thus useful to all.  By all, that means the vast majority of MH home owners, as well as to MH businesses of all sizes and types.

4)    The same is true of both major parties. As political independents, we can say there is one thing about the Democratic platform that – on paper – is good for independent businesses. What is it? Their antitrust/anti-monopoly plank could, if used properly, make a difference for small businesses. But we frankly don’t see Democrats using it yet. Republicans – the so-called Grand Old Party or GOP – tends to be more pro-businesses.  But the GOP has for years done, or failed to do, certain things that harm independents of all sizes. But now, at the federal level and in dozens of states, the GOP has a modest edge in the branches of elected government.

But the point of this analysis and commentary is this.

You may be the most honest or ethical person in your town. You may have great value and service. But as ELS’ Sam Zell observed, others with no investment in your company or profession others can make, break, minimize or maximize your business, profits, and results.

That’s why on the slowest day of the Labor Day weekend, literally thousands of more professionals were reading and viewing content on MHProNews than any other similar trade resource in our industry. Because we at MHProNews and on MHLivingNews keep our eyes on issues that matter to you, as well as to your present, and potential customers.

Pain, pleasure, persuasion, and honestly sustainable MHVille profits can only be achieved via reality-based action. That requires solid information. Day-by-day, we bring you the MH “Industry News, Tips, and Views Pros Can Use.” ©

For our Jewish friends and colleagues, happy Rosh.

With no further adieu, let’s look at the headlines, reports, facts, and stories that can help make you navigate business better and more profitably.  Together, let’s look at the issues that can make manufactured homes more available to millions of potential buyers, who should become happy home owners. We’ll start with MHLivingNews, the Masthead, and then do the Daily Business News recaps for last week.

Affordable Living! Before and After Video, Remodeling a 1972 Mobile Home, Under $5,000

Affordable Living! Before and After Video, Remodeling a 1972 Mobile Home, Under $5,000 – manufacturedhomelivingnews.com

The need for affordable housing is serious. Former President Jimmy Carter has publicly commented on the crisis recently. From that same era, Presidents Richard M. Nixon and Gerald Ford spoke favorably about mobile homes as much needed affordable living. The HUD Code for manufactured homes went into effect on June 15, 1976.

The late Howard Walker, longtime vice chairman of Equity Lifestyle Properties (ELS), and prior Treasurer for the Manufactured Housing Institute (MHI) had at times a brusque sense of humor. Often the best part of many association or corporate meetings are when networking and socializing occurs. In fairness, that statement applies to MHI too.

Shanah Tovah, Happy Rosh! About Leaping Cultural Barriers, and Where the Buck Stops

Former President Barack Obama Says President Trump is “Symptom, Not the Cause,” plus MH Market Updates

Former President Barack Obama Says President Trump is “Symptom, Not the Cause,” plus MH Market Updates

“Growth,” “Fight on to Victory,” “One People, One Family, and One Glorious Nation Under God”

“Growth,” “Fight on to Victory,” “One People, One Family, and One Glorious Nation Under God”

Hot MHVille Issue, Boils Among Most Americans too

Hot MHVille Issue, Boils Among Most Americans too

Deaths in MH Communities from Trees Falling, “Get to the Root of It”

Deaths in MH Communities from Trees Falling, “Get to the Root of It”

Like No Place Else, plus Manufactured Housing, Stocks, Market Updates

Like No Place Else, plus Manufactured Housing, Stocks, Market Updates

2018’s Hardest-Working States in America, How Does Your State Rank?

2018’s Hardest-Working States in America, How Does Your State Rank?

Manufactured Housing’s Labor Day, Celebrating Those That Do the Work

Manufactured Housing’s Labor Day, Celebrating Those That Do the Work

We’re a team, a family here. We can’t do it without you, and frankly, thousands of manufactured housing pros need what we do as independent reality checks. Our sponsors make that possible. Thanks to our readers, and to those who make this platform the runaway #1 in the industry. Make sure you keep up to date, and encourage your team members to do the same. ## ## (News, analysis, and commentary.)