“Fool me once, shame on you.
Fool me twice, shame on me.”
– George Horne, according to Quora.

“People who have a vested interest are feeding the journalist confirmatory material all along the line.” – Warren Buffett, quoted in Medium.

“We can afford to lose money — even a lot of money. But we can’t afford to lose reputation — even a shred of reputation…We must continue to measure every act against not only what is legal but also what we would be happy to have written about on the front page of a national newspaper in an article written by an unfriendly but intelligent reporter.”- Warren Buffett, quoted in Business Insider.

Controlling the narrative is something Warren Buffett and every serious political or business operative in America wants to do whenever possible.

One only has to look at how much Buffett speaks to the media, and owns or influences media via the giant conglomerate he leads, named Berkshire Hathaway.

The battle over controlling the narrative about manufactured housing is something that has been occurring inside and outside of the MH industry for decades.

But arguably no one before Berkshire Chairman Buffett, or Vice-Chair Charlie Munger, have had the depth of media connections, ownership, savvy, and influence they do.

Flashback to the late Howard Walker

What until now has largely unknown by the bulk of the industry is this message from Jennison to MHProNews publisher, L.A. ‘Tony’ Kovach. That was later followed up with the NDA from MHI general counsel, Rick Robinson, JD.

Note that both Walker and Berkshire brand MH lender 21st Mortgage Corp President and CEO Tim Williams both praised MHProNews before and after that spring of 2014 time frame.

But the Timeframe Covered by that NDA has now Passed…

Sources with MHI and past MHI VPs tell MHProNews that there’s a “wide use” of NDAs by the Arlington, VA based trade association.

NDAs are clearly a way to control people, who might otherwise communicate on an issue or topic.  That in turn controls a narrative.

Kevin Clayton, President and CEO of Clayton Homes in the video and report linked below, mentions how they like to work with nonprofits.  MHI is a nonprofit, one of several they work with. That statement by Clayton is an important revelation, one of several made in that nearly hour long interview video.

The Daily Business News has been reporting on how voices that span the left-right divide have said the high degree of control that American news media outlets are controlled by a handful of conglomerates. 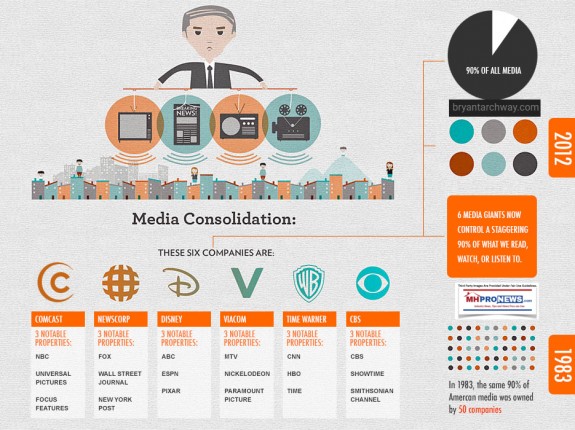 That’s not to say that all news is alike.

It is to say, as various experts previously cited have explained, that those few media conglomerates decide what makes the news, and what doesn’t.

It’s perhaps also why Martin Luther King, Jr. – who himself experienced harsh, as well as favorable media coverage, in his time – said the purpose of education is to think critically.

It’s not important at this moment why the parent company of MHProNews did not sell out to MHI. That will be explored in a future report.

What is important is that MHI initiated a move to buy MHProNews.

Recapping the facts in evidence: MHI, and senior people with MHI, saw the value of owning and/or controlling the most read news read by MH industry professionals.

It must be noted that before and since that time,

And Williams himself said that we strive for balance.

That was 2015.  Williams knows that more recently, MHProNews has often asked him, MHI, officials at Clayton, et al, for comments on issues related to alleged efforts to monopolize – as much as possible -both messaging to industry professionals, and consolidate industry itself. The method for that is found in the link below. They’ve not disputed the documents, some signed by Williams, nor the analysis.

Warren Buffett Would be Okay With Clayton Homes Losing Money, Says Kevin Clayton – But Why?

Our publisher says, “There are times I ponder the quote, “Fool me once, shame on you [meaning, the person that pulled the underhanded trick]. But fool me twice, shame on me [meaning, for falling for the same trick again].”

Publisher L. A. ‘Tony’ Kovach says that now MHVillage Co-President Darren Krolewski approached him at the Louisville Show a couple of shows ago. “Would you consider selling out?” – Krolewski asked Tony Kovach.

The conversion took place on the Louisville show floor, and covered other topics. Our publisher made no direct comment on Krolewski’s question. But only a few minutes after the conversation ended, Krolewski and MHI President and CEO Jennison were seen on the show floor talking.

“It’s obvious that MHI and the powers that be associated with them want to control the narrative within the industry,” Kovach said. “They support those in MHVille bloggers and publishers – like MHVillage owned MHInsider – who will publicly support MHI, that’s what the open evidence reflects. It is equally obvious that MHVille professionals largely aren’t buying the arguable propaganda’ that MHInsider and others are putting out (see photo, taken on the final day of the Tunica show).”

“We focus on what sources with apparent knowledge tell us, we follow the money, the evidence, and use common sense. We then line up what people say, and compare it with what they in fact do,” said Kovach.” “We give MHI, the key Berkshire brands in MH, and others the opportunity to comment, clarify, deny, or whatever.”

It’s also worth noting obvious connections. Using our “wheat and chaff” methodology, we are less concerned with the source – be it left, right, or neutral – than the evidence and logic of the source. Some sources can be correct on a given topic, yet may be wildly inaccurate on others.

Buffett has expressed concerns over journalism and journalists, but still believes there’s value in journalism.

“The smarter the journalists are, the better off society is. For to a degree, people read the press to inform themselves – and the better the teacher, the better the student body.” – Warren Buffett, per BrainyQuote.

Buffett addresses journalists routinely, but they are often ‘friendly’ sources. He owns numerous media outlet, starting with the newspaper based in Berkshire’s capital city, Omaha. Isn’t it all a part of controlling the narrative?

Why did Buffett himself defend Clayton, their lenders, or Wells Fargo when they were under mainstream media attack? Why didn’t he defend and promote the good name of manufactured housing industry in the same fashion?

MHI’s Jennison may have supplied the answer. He said the industry needed to grow slowly. Why?

Why should MH grow slowly, when there’s an affordable housing crisis? Why should MH have fallen so far behind the RV industry? Why did RVs recover more quickly than MH?

The best place to hide is often in plain sight.

But hiding in plain sight doesn’t discount the possibility that Berkshire – while allowing other forces to press on the industry through regulations, zoning, media, and other means – may have used MHI in ways that violated antitrust guidelines that MHI themselves have published. See that MHI document, linked here.

As of this date, after repeated requests to MHI and executives with various Berkshire brands operating in MHVille, readers should note that they’ve offered no alternative explanation or defense to these allegations and documented concerns.

Rather, they and their apparently rewarded surrogates do cheer leading, perhaps hoping to continue to distract the industry, even as they’ve demonstrably worked to consolidate the industry.

Now you know why an executive told the Daily Business News, “Tony, if MHProNews is writing about it, I want to know about it.”

That executive isn’t alone, as LinkedIn reports a record number of profile views of our publisher.

Third-party statistics, including those by Webalizer, says our readership is up some 250% in a year. As an advertiser recently said, “Tony, I don’t think [that most] understand the power and reach of your platform[s].”

Doesn’t that sounds like the kind of compliments that Tim Williams and Howard Walker publicly shared about MHProNews and MHLivingNews, months after the events noted above?

are among the apparent modus operandi of MHI and their ‘big boys’ that seek to profitability consolidate – at bargain/depressed rates – because the industry has been kept at historically low sales and production levels.

The facts, and evidence are compelling, aren’t they?

See the related reports, further below. “We Provide, You Decide.” © ## (News, analysis, and commentary.)

“Thou Shall Not Steal,” $2 Trillion Annually Lost to Lack of Affordable Homes, Making the Manufactured Home Case