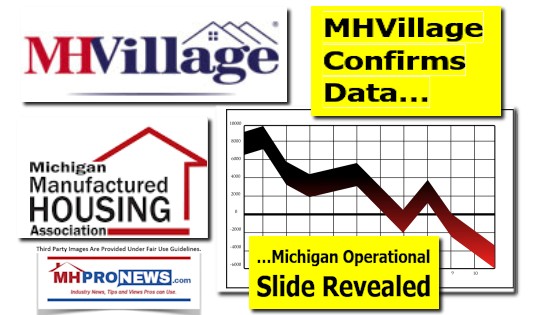 In a message forwarded to the Daily Business News, MHVillage (MHV) confirmed troubling data that has been presented in person to dozens of gathered industry professionals. 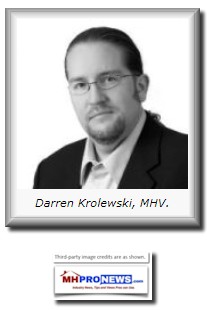 “Based in Grand Rapids, Michigan, MHVillage Inc. is the nation’s premier online marketplace for buying and selling manufactured homes with more than 25 million unique visitors annually. Last year, more than 80,000 homes were sold on MHVillage with a combined transaction value exceeding $3 billion,” said their promotion of a George Allen event.

Accepting their data claims at face value, the numbers on the surface appear impressive, which is their obvious intent.  They’re claiming they are the “premier marketplace.”

But when the MHVillage data is viewed more closely, what they reveal ought to be troubling to marketers and sellers of HUD Code manufactured housing.

The ratio of sales of homes on their site is a tiny fraction of a single percent.

Several questions about the decline and related were posed to the Michigan Manufactured Housing Association’s executive director, over the course of a few days.  Neither Bill Shaefer, nor the association, opted to answer.

What’s going on?  It’s part of a previously reported trend, which can be read in the linked article below after this column is finished.

While Manufactured Housing Overall Rises, Some Slip Sliding Away

Krolewski is on record sharing this view, “I think one of the challenges we have as an industry is that there is not enough positive news about manufactured housing to counter the negative.”

“For years, we have wondered WHY there was so little pro-industry advocacy from MHI to government movements, proposals, rules, etc. that were [often] not in the best interest of this industry,” said Bob Crawford, president of historic Dick Moore Housing, a BBB A+ rated firm.

Krolewski has said at one point that the industry would be getting support from the Manufactured Housing Institute (MHI) on image building and messaging.  In fact, MHI has an active social media campaign, and reportedly one or two public relations people on staff, and has contracted others at times too.

That being so, where are their measurable results?

The industry is slowly crawling back from the bottom hit in 2009/2010. Aren’t new manufactured home sales the final metric that matters?  Isn’t that how the National Association of Home Builders ™ (NAHB), or the National Association of Realtors ™ (NAR) are measuring results?  Don’t sellers see want to know how many housing starts, and how many actual conventional housing unit sales?

“We always hear about the tornadoes, flooding, fires, residents getting evicted from their homes so a shopping center can be built, unreasonable rent increases, how manufactured homes depreciate in value, etc,” Krolewski has said. “I think it’s less about the industry not responding appropriately, than it is us constantly having to play defense when we do.”

And all of this from the publisher of the MHInsider?

Rolfe has said, “…it’s my belief that the only way to elevate the public opinion of our industry is to explain to people (who are often full of negative stereotypes from such movies as 8-Mile and television shows like COPS and Trailer Park Boys) the truth about our product and business model.”

Kurt Kelley, JD – a colleague of Rolfe’s in the MHR project – pointed out that: “My Dad used to tell me, ‘Perception is the reality of others. So you better make sure you are perceived accurately and positively.’ If you let others define you, you’re stuck with their definition of you.”

“Historically,” Kelley said, “the MH industry has been defined by the lowest common denominator, and not by the great value offered by our homes or the excellent living choice MHC’s offer across the country. A recent poll showed that 85% of all Republicans and 60% of all Democrats didn’t trust the media. You can fight back successfully.”

Editorially, we note that Kelly’s point is precisely what MHLivingNews and MHProNews has done, fight back with facts.

So why did MHI, while this operation was still their member, undermine and allegedly attempt to derail our pro-growth industry efforts?  One of hundreds of examples can be found at the link below.

“The first step in solving a problem is to recognize that it does exist,” the late, great Zig Ziglar said.

“The trouble with most of us is that we would rather be ruined by praise than saved by criticism,” said the inspirational minister, author, and speaker, the Rev. Norman Vincent Peale, according to BrainyQuotes.

“Criticism may not be agreeable, but it is necessary. It fulfils the same function as pain in the human body. It calls attention to an unhealthy state of things,” said Winston Churchill, per the New Statesman.

Frank Rolfe, Marty Lavin, Bob Crawford, L. A. “Tony” Kovach and others are among those that have recognized that the industry’s post-production sector – specifically Arlington, VA based MHI – has failed to deliver on image building.

The result?  Historically low sales levels, which have contributed to industry consolidations.

Having identified the problems, the next step must be to move toward solutions.

The communities sector, after breaking last year with MHI, is launching their own post-production national association.

What about those in retail, installation, lending, suppliers, and services, etc.? To learn more, see the related articles, linked below. ##  (News, analysis, and commentary.)

(Third party images, and content, are provided under fair use guidelines.)

Footnote: 1) Typo in the original.  In fairness to Rolfe, in England, quotes are placed as he used it, inside the punctuation mark.