The short answer to the headline question is, “it depends.”

On some facts, such as the number of monthly shipments of manufactured homes, where more than one easy cross-check is available, MHI is reasonably accurate in reflecting third-party statistics.

But there are other subjects which they’ve published under their claimed mantle of speaking for all segments of the MH Industry. Among the documents and claims made to the general public, their claimed facts are a mix of accurate and inaccurate information.

A few examples below are from the MHI website, and/or other official MHI sources. They include, but are not limited to what follows.

Interest and investments in the MHC sector are high. Lenders and investors, as an MHI member company official told MHProNews, want and need trustworthy data. It’s important to members and the industry, not just a matter of curiosity.

I) The total number of manufactured home communities (land lease communities, a.k.a. ‘mobile home parks’ (some are indeed ‘MHParks,’ when they are primarily pre-HUD Code homes in them, but in most other cases that use that term or ‘trailer parks’ ought not to be applied).

A) In a May 2017 press release, MHI’s National Communities Council (NCC) stated there were some 38,000 manufactured home communities (MHCs). That indeed is close to the estimate of their member and supporter, MHVillage/DataComp (see screen capture of their association’s published information, below).

B) But their member MHPFunds/RV Horizons/Mobile Home University pits the count at 44,000 MHCs, which they state has been verified.  They’ve told MHProNews they believe the actual count may be closer to 45,000, or perhaps higher.

Note that the last member – in an emailed comment to MHProNews – said they are a “direct, dues-paying member” mainly to protect their interests against encroachment by MHI/NCC of their own work, services, and products.

Quoting Allen, “Yes, I continue to be a direct, dues-paying [MHI/NCC] member, more to protect my business interests from imitation than anything else.” Ouch.

So the question should be: how did MHI’s NCC make their choice between those three very different figures?

With community closures and related issues on the rise, where is MHI’s action plan on this hot community focused issue?

Almost any honest, informed professional will say that financing – how much down, how much a month, and what credit requirements/points/fees/terms are needed – are critical for the success of any big-ticket item.  That includes housing sales.

At an MHI/NCC event, ELS’ chairman Sam Zell said that it was a failure for the industry (read MHI?) in securing its retail credit base. 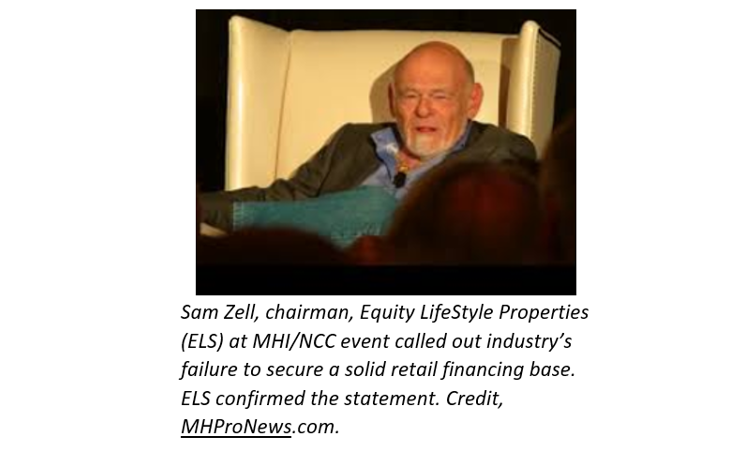 Beyond Zell’s noteworthy concern, what about MHI publishing clearly erroneous information about manufactured home financing in information intended for the public? One must ask: did this information get proofed by experts?

Further, once the error was published, why has it been left uncorrected?

We’ve publicly called this out before.  Yet as of 8.14.2017, MHI still have not made what could be an easy ten-minute fix.  What does that say about MHI?

How many consumers read information from MHI – and trusting it – stopped considering a manufactured home? 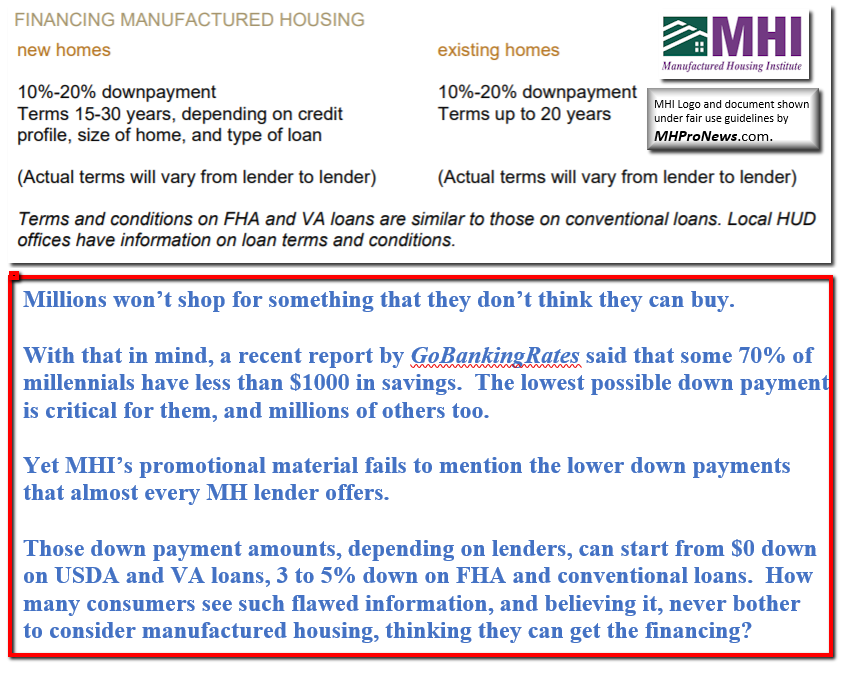 MHI is a lobbying organization.  So why have they failed to obtain their own key agenda items for so many years? 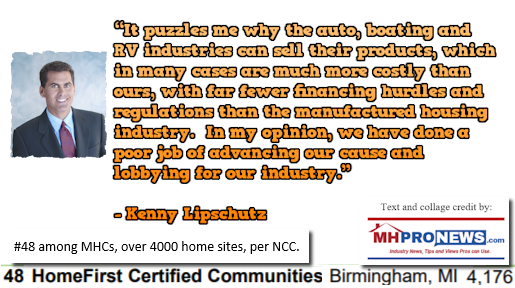 Kenny Lipschutz is an MHI/NCC member.

Regarding communiques to their members, public officials or the media, several alleged errors, failures, and omissions by MHI on lobbying or other issues arise.

Since MHARR, MHProNews, and/or MHLivingNews or others have challenged them on such topics, and MHI leaders, members and staff are regular readers of MHProNews – what does that say about their organization?

If accuracy in facts matter for credibility and other practical reasons, then on issues MHI engages in, based upon examples like those shown, doesn’t there have to be a question mark behind many things that comes from the Manufactured Housing Institute (MHI) and/or their National Community Council (NCC)?

An MHI insider tells MHProNews that the organization was incorporated in Illinois. Under state law, there appears to be several state law issues that relate to conflicts of interest.

“Elections” at MHI for their Executive Committee – which is where the organization’s elected power is vested – are problematic at best, say sources.

MHI members have told MHProNews that they already consider the new slate of Executive Committee members to be “a done deal.”

If so, then are MHI elections a subterfuge?

A few years ago, member George Allen challenged that body with a slew of hand-carried proxy votes. But without bylaws being made widely available to the members or the public, how can one know if Allen won?

The question should not be construed to imply support for Allen, but rather as a legitimate question about the validity, integrity, and legality of their organizational management processes.

Omissions, and Position Shifts – Communicated to their Own Members

There are several examples. To keep this brief, we won’t rewrite previous reports. But we will hereby provide links to several issues, analysis, and concerns raised by professionals inside and outside of MHI.

MHI has been given several opportunities to address these concerns. Neither in their own emailed updates, nor directly to MHProNews, has MHI ever…

Denied, or attempted to debate any of the items below.

Map of Top Billionaire in Every State 2020, plus Teasers, Data, and Manufactured Housing Investing, Stock Updates