Citing information from Deutsche Bank, left-leaning MarketWatch said: “With the large-cap benchmark having shed around 22.3% so far in 2022 — the biggest drop since 1932… — strategists at the bank see the remainder of the year hinging on whether or not the economy avoids falling into recession.” That same source stated that “The S&P 500 officially hit bear market territory last week and, according to Deutsche Bank, is currently on track for its worst half-year performance since the Great Depression.” “If we don’t see a recession materialize over that period it might be tough for markets to continue to be as bearish as they have been, and a bounce back resembling history might be possible,” strategist Jim Reid said in a client note on Tuesday. “However, it’s hard to see markets recovering if we see firm evidence of the recession.” Though the bank sees a recession beginning in 2023, “the risk of an earlier move [into recession] is clearly building with declining financial conditions, and consumer and business confidence plummeting,” Reid said.

So much for a chorus of Biden Administration officials, including Joe Biden himself, saying that a recession is not “inevitable.” Oddly, on Tuesday, the new White House Press Secretary Karine Jean-Pierre said US is poised to enter a period of “stable and steady growth.”

“Right now, we don’t see a recession. We are not in a recession right now.

Right now, we’re in a transition where we will go into a place of stable and steady growth, and that’s going to be our focus.”

They said the same thing about inflation. pic.twitter.com/ISTc9HR1ZS

The focus of what? Of a choreographed chorus of Biden administration talking points? As the tweet above noted, a year ago, there was a similar denial about inflation. How long can or will a strategy of denial and delay work?

While ‘experts’ and politicos can debate if a recession has started, ironically House Democratic Whip James “Jim” Clyburn (SC-D) says it already has started. On 6.21.2022, unlike other Democrats here was the response of Congressman Clyburn. “For a lot of people we are [in a recession],” Clyburn said. “No question about that. If you can’t afford to buy gasoline, you are in a recession.”

The winds of change in Washington and nationally are blowing, as Americans are pushing back against the agenda that has brought the previously stable and growing economy into this period of economic turmoil. The recent victory of now-Congressman Mayra Flores is the latest evidence of the winds of change blowing. Flores, a Mexican-born Republican who has a border agent as a husband, just replaced a Democrat in a district that has been held by Democrats for some 150 years.

My very first day in office and it’s a memorable one for sure. This is what dreams are made of; faith, family, and hardwork. #TX34 #DreamsComeTrue pic.twitter.com/FXx6DDKqMM

To Clyburn’s point, fuel costs are an integral point in all housing prices, including manufactured housing.

That pivot is the segue to the other headline topic on declining housing sales as prices as interest rates continue to rise.

One of the largest portions of the U.S. economy is the housing market. According to a press release by the National Association of Realtors (NAR) to MHProNews and others in media is the following report. It will be followed by manufactured housing industry comparisons and related information. 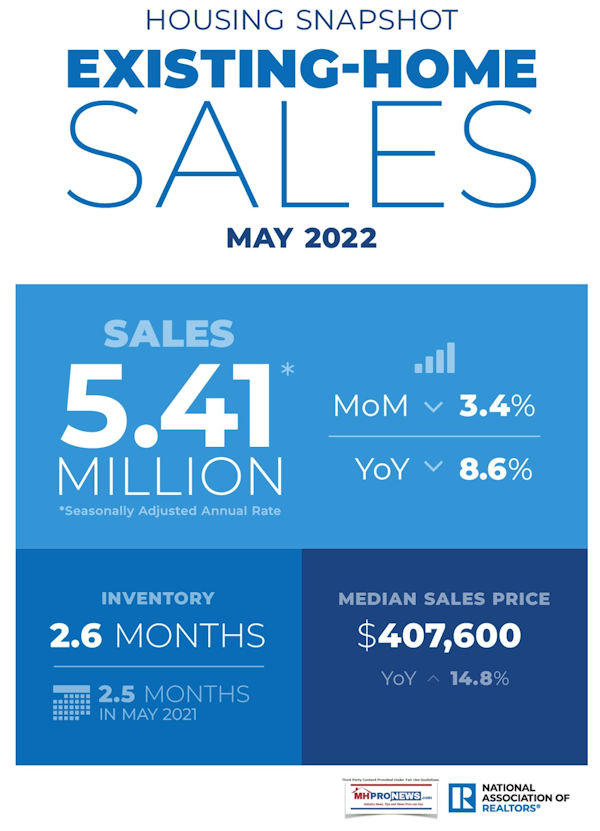 Existing-Home Sales Fell 3.4% in May; Median Sales Price Surpasses $400,000 for the First Time

WASHINGTON (June 21, 2022) – Existing-home sales retreated for the fourth consecutive month in May, according to the National Association of Realtors®. Month-over-month sales declined in three out of four major U.S. regions, while year-over-year sales slipped in all four regions.

Total existing-home sales,1 https://www.nar.realtor/existing-home-sales, completed transactions that include single-family homes, townhomes, condominiums and co-ops, fell 3.4% from April to a seasonally adjusted annual rate of 5.41 million in May. Year-over-year, sales receded 8.6% (5.92 million in May 2021).

“Home sales have essentially returned to the levels seen in 2019 – prior to the pandemic – after two years of gangbuster performance,” said NAR Chief Economist Lawrence Yun. “Also, the market movements of single-family and condominium sales are nearly equal, possibly implying that the preference towards suburban living over city life that had been present over the past two years is fading with a return to pre-pandemic conditions.”

Individual investors or second-home buyers, who make up many cash sales, purchased 16% of homes in May, down from 17% in April and 17% in May 2021.

Distressed sales5 – foreclosures and short sales – represented less than 1% of sales in May, essentially unchanged from April 2022 and May 2021.

Realtor.com®’s Market Trends Report in May shows that the largest year-over-year median list price growth occurred in Miami (+45.9%), Nashville (+32.5%), and Orlando (+32.4%). Austin reported the highest growth in the share of homes that had their prices reduced compared to last year (+14.7 percentage points), followed by Las Vegas (+12.3 percentage points) and Phoenix (+11.6 percentage points).

Existing-home sales in the South declined 2.8% in May to an annual rate of 2,410,000, down 8.4% from the previous year. The median price in the South was $375,000, a 20.6% jump from one year ago. For the ninth consecutive month, the South recorded the highest pace of price appreciation in comparison to the other three regions.

The National Association of Realtors® is America’s largest trade association, representing more than 1.5 million members involved in all aspects of the residential and commercial real estate industries. ##

Recent manufactured housing data, based upon official sources, are found in the reports linked below.

The Manufactured Housing Institute should doubtlessly update their data on how many full-time equivalent employees there are in manufactured housing. But they have used the figure 75,000. MHI claims over 1000 member firms, but they arrive at the total – per sources – in part because they count every Clayton Homes owned retail store as an individul ‘member.’ That means that over 1/3 of all MHI members are Clayton. If someone wonders how much influence they carry at MHI, keep that and other data points in mind. That noted, NAR’s reported 1.5 million members is about 20 times the size of all of manufactured housing combined, using that MHI data point.

Another comparison between NAR and MHI is their respective methods of reporting data. NAR, like the Manufactured Housing Association for Regulatory Reform (MHARR), reports their data publicly monthly.  So too does the National Association of Home Builders (NAHB), or the Recreational Vehicle Industry Association (RVIA). So, why does MHI hide their data behind a members-only pay wall? Are they afraid of reporting industry data and having to account publicly for their performance? Hold those thoughts and factoids in mind as you ponder why frustration with MHI is reportedly growing among MHI members, particularly industry independents. Evidence of those claims and more facts are found in the reports linked below.

There are good reasons to believe that manufactured housing could be soaring, but ONLY if GOOD EXISTING LAWS WERE FULLY and PROPERLY ENFORCED. The fact that MHI has not deployed their legal resources to use the courts to force local and federal compliance with widely bipartisan Congressionally passed mandates begs the question, what is MHI waiting for anyway? Are MHI’s larger members working together to keep the industry underperforming so that industry consolidation can continue? The evidence from publicly trade companies that are MHI members strongly suggest the answer to that question is yes. In many browsers, you can click the quotes collage image below and follow the prompts to open the image up to a larger size. It reveals at-a-glance the disconnects between MHI claims of working for growth and the reality of why growth has been so slow.

Recall too that MHI’s prior president and CEO, Richard “Dick” Jennison, let the proverbial cat out of the bag. He specifically said on camera that the industry should grow slowly. Imagine if NAHB, RVIA, or NAR leaders said something similar. They’d be job hunting. But instead, Jennison kept his position after a series of that and other MHProNews exposés. Is it any wonder that MHI won’t publicly respond to these concerns and neither will their attorneys? Is it any wonder that since only MHProNews is reporting this pattern and related information that this trade publication dwarfs all of our competitors in reader engagement? For months on end, though we only publish one or two reports daily here, MHProNews has enjoyed well over 1 million pageviews monthly on our main cPanel, with others on our large site adding to that total.  Do the math. Clearly, not everyone in manufactured housing reads here. But those who do have often averaged some 6 articles (pageviews) per visit. There are obviously outsiders looking in on MHProNews, as other data and sources tell us that public officials, nonprofits, and researchers are on our site on a routine basis.  Those who lead MHI can duck for a time, but they apparently can’t hide from the facts and figures shared and linked herein.

MHI has arguably boxed themselves in by a combination of statements, action, and inaction. See the report linked below for specific examples.

The Business Daily Manufactured Home Industry Connected Stock Market Updates.  Plus, Market Moving Left leaning CNN and Right-leaning (Newsmax) Headlines Snapshot. While the layout of this daily business report has been evolving over time, several elements of the basic concepts used previously are still the same. For instance. The headlines that follow below can be reviewed at a glance to save time while providing insights across the left-right media divide. Additionally, those headlines often provide clues as to possible ‘market-moving’ news items.

Headlines from left-of-center CNN Business – from the evening of 6.21.2022

MHProNews has pioneered in our profession several reporting elements that keep our regular and attentive readers as arguably the best informed in the manufactured housing industry. Among the items shared after ‘every business day’ (when markets are open) is our left-right headline recap summary. At a glance in two to three minutes, key ‘market moving’ news items are covered from left-of-center CNN Business and right-of-center Newsmax. “We Provide, You Decide.” © Additionally, MHProNews provides expert commentary and analysis on the issues that others can’t or won’t cover that help explain why manufactured housing has been underperforming during the Berkshire era while an affordable housing crisis and hundreds of thousands of homeless in America rages on. These are “Industry News, Tips, and Views Pros Can Use” © features and others made and kept us the runaway #1 in manufactured housing trade publisher for a dozen years and counting.

Sample Kudos over the years…