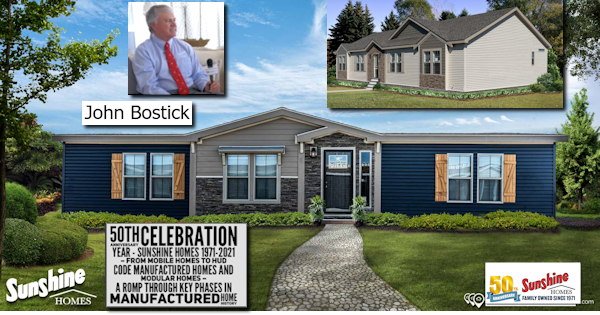 Under the category of saving one of the best for last (end of the year 2021) is this report on John Bostick and Sunshine Homes. In 2021 Sunshine Homes celebrated its 50th anniversary. “Sunshine Homes has been building quality homes since 1971. Our mission is to build manufactured homes and modular homes with quality, style, and value to meet the evolving needs of today’s hardworking families. We are a family-owned, debt-free, and financially sound company. Our homes have a variety of options to fit your taste and budget in order to completely satisfy any individual or family who is looking for quality and dependability without sacrificing style.” They are not publicly traded, so do not get as much attention as some other HUD Code producers that MHProNews reports on more often because of stock trends, etc. But Sunshine Homes 50th anniversary year is a reminder of the remarkable staying power that this Red Bay, Alabama-based independent producer of HUD Code manufactured homes achieved in this era of consolidation.

The Masthead is an editorial blog. As a personal note, I sold Sunshine Homes in the early 1980s on South Shields Blvd in Oklahoma City’s once robust “mobile home row.” Among the models that come to mind was an attractive 2+1 Front Kitchen floorplan. The exterior siding was attractive. The kitchen had a unique breakfast booth. If memory serves, it was a 14×64’ and was a good seller. Unlike some models (then or now), that model had a guest coat closet and was eye-appealing inside and out. Then and now, Sunshine earned a reputation for properly servicing what they sell, which sadly not all factory-builders can make the same claim without crossing their fingers behind their back.

So, for a variety of reasons, a Sunshine was a manufactured home that was a pleasure to sell, and they were and remain good people to do business with.

Among their more recent promos are the following.

You Have Not Seen a Manufactured Home Like This – Sunshine Homes

“They think it is a stick-built house” instead of being a “manufactured home.” It should be obvious that a favorable comparison of a Sunshine Home to conventional (a.k.a. ‘site built’ or ‘stick-built’) homes is widely perceived to be a plus.

It is no secret that John Bostick, the longtime leader of the firm has periodically served as Chairman for the Manufactured Housing Association for Regulatory Reform (MHARR) for years.

In my view, an evidence-based case could be made that Bostick was a good spokesperson for the industry at large, and for manufactured home independents.

Bostick in the Berkshire era of Manufactured Housing has favored robust industry growth and has periodically called for a group effort to step up and publicly act. Unlike some, Bostick put money – not just lip service – behind that call to action.

As a useful aside, right or wrong, there are those who view MHProNews as something analogous to MHARR as MHInsider (or other mouthpieces) are to the Manufactured Housing Institute (MHI). That’s understandable. But that notion fails the test when carefully examined.

Each MHARR member is providing a uniquely important role in preserving an environment where manufactured housing independent producers can survive the various pitfalls, traps, and swindles that exist and potentially thrive. Sunshine Homes and Bostick have long been part of that proud tradition.

Sunshine has standards which they strive to uphold. The routinely high degree of satisfaction is reflected in various interviews on- and off-camera statements made by dozens of actual Sunshine manufactured homeowners. While some of those were selected, as is often the case when video interviews of consumers are done, this writer has been to communities where Sunshine was the dominant product. People encountered at random felt the same type of pride of ownership in their Sunshine Homes as those who granted an on-camera video interview.

It is attention to customer service needs – which occurs with $500,000+ conventional housing as well as manufactured homes – that reflects why there are apparently so few complaints (the Better Business Bureau reports only 1 in 3 years, and it is successfully resolved).

Another remarkable point about Sunshine, in this writer’s experience, is that Sunshine retailers routinely enjoy selling the product and working with the company. This is stark contrast with experiences related by retailers for certain Big 3 producers, for example. When a manufactured home ‘dealer’ calls or emails with a complaint to MHProNews about a HUD Code producer, it is usually one of the Big Three. Is that coincidence? Is that due to market share? Or is it because there is a different mindset that exists with monopolizers/consolidators then often exists with white hat independents?

With those evidence- and experience-based background items, the videos and linked reports should have more meaning. Sharing these thoughts and insights should serve several purposes. Among them:

Some linked videos and reports are above and as follows.

Sunshine and Bostick thoughtfully sponsored video interviews that were pro-industry growth and often had little or nothing to do with their firm. This interview below is an example. Sunshine took an authentic the ‘rising tide lifts all boats’ view. They walked the talk.

The Franklin County Times reported just a few weeks ago (Oct 22, 2021) that “Fancher said Sunshine Homes in Red Bay is in the process of a $1.5 million expansion of 32,125 square feet to their mobile home [sic] production…” Clearly, business must be good. Sunshine makes manufactured and modular homes, and many floorplans can be built to either code.

Higher demand has also led Sunshine to a press for more employees to build their respected homes.

Their growth noted, objectively, business is not as good for most in the manufactured home business as it was at the turn of the century. An exception is Clayton Homes/Oakwood Homes. The Warren Buffett “moat” has apparently worked for them to grow while so many others were throttled, killed off, or consolidated. In essence, even Clayton was ‘acquired’ by Berkshire Hathaway – and the rest is related in reports like the one below. Let me stress again, these are my evidence- and experience-based thoughts.

To draw to a conclusion, MHARR structures their membership differently than MHI has. MHARR members do not always seek to be publicized.

The articles on MHLivingNews and MHProNews that include Sunshine Homes are numerous, please do a search for “John Bostick” or “Sunshine Homes” if you are looking to learn more about what public officials, retailers, community residents, and single-family manufactured homebuyers have to say about Sunshine Homes. For a residential style HUD Code home at a competitive price, they are difficult to beat.

MHARR members and their highly stable staff have faithfully worked for the industry without the duplicity and logical disconnects that are increasingly evident in the behavior of others. People like John Bostick and companies like Sunshine Homes are an important reason for the ongoing existence of the industry’s remaining producers. They merited this year-end attention during their historic 50th years in business anniversary. If they can do good and grow, others can too. ##

A recent article in Oxford Magazine featured the thoughtful gift of President and CEO John Bostick, who donated a manufactured home to The Pantry. ” The Pantry has provided food for those who might need that extra bit of sustenance, and the countless volunteers who run and work at the facility have been more than ready to accomplish the task,” said Oxford Magazine.

A Cup of Coffee with…John Bostick

1)Who, What and Where: (Your name and your formal title at Sunshine Homes and where your company is based). 2) Background: (Educational/Professional snapshot before entering the factory-built housing arena. Explain how you see your education and experience benefiting your work in manufactured and modular home building.

In a release late yesterday afternoon, the Manufactured Housing Association for Regulatory Reform (MHARR) informed their members, MHProNews, and the industry at large about a special honor bestowed on James “Jim” Shea, Jr. Their release is below and will be followed by additional information.