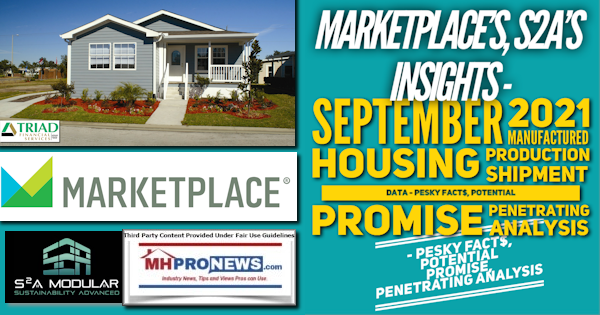 Politicians, public officials, as well as major business leaders have lost credibility. So said establishment-minded and Civic Alliance member Edelman in a survey linked here. Politicians have on numerous occasions exhibited the paltering method. Various facts are stated, that may be largely or wholly accurate. But in the absence of context, selective use of facts can be misleading. Furthermore, accurate facts absent an evidence and reason-based analysis can allow a bureaucrat, politico, nonprofit, business, media, or others to spin the facts in a manner that weaponizes data in favor of an obvious or subtle agenda.

Among the reality checks following the latest production data from the Manufactured Housing Association for Regulatory Reform (MHARR) media release to MHProNews will be insights from a report in Marketplace media. Factory-builder S2A insights will also be examined.

For newcomers, it is worth noting that the MHARR data is based upon inform collected for the U.S. Department of Housing and Urban Development (HUD), so it is as about as official as it gets.

So, following the MHARR report, will be additional and related information, plus more MHProNews analysis. Reports based upon facts, evidence, and common-sense commentary are what has made and kept MHProNews as the runaway #1 trade media in MHVille, and none of our would be rivals bothers to directly challenge that claim.

Washington, D.C., November 3, 2021 – The Manufactured Housing Association for Regulatory Reform (MHARR) reports that according to official statistics compiled on behalf of the U.S. Department of Housing and Urban Development (HUD), HUD Code manufactured housing industry year-over-year production increased once again in September 2021. Just-released statistics indicate that HUD Code manufacturers produced 9,025 homes in September 2021, a 10.8% increase over the 8,143 new HUD Code homes produced during September 2020. Cumulative production for 2021 now totals 79,435 homes, a 13.9% increase over the 69,726 homes produced during the same period in 2020.

A further analysis of the official industry statistics shows that the top ten shipment states from the beginning of the industry production rebound in August 2011 through September 2021  — with cumulative, monthly, current year (2021) and prior year (2020) shipments per category as indicated — are:

The September 2021 data results in no changes to the cumulative top-ten shipment list.

For the sake of the steady stream of newcomers to our site, it should be noted that MHARR is a producers-focused trade group. MHI, by contrast, is a self-described nonprofit that works for “all segments” of manufactured housing, meaning both production and post-production. Technically, issues such as zoning, placement, financing, marketing, etc. are post-production issues.

All of the homes in this photo collage above are modern HUD Code manufactured homes. They predate the so-called CrossMods, which the data thus far reveals are a marketplace failure. https://www.manufacturedhomepronews.com/masthead/texas-real-estate-center-its-real-crossmods-manufactured-housing-institute-mhi-finance-comments-texas-manufactured-housing-association-tmha-news-analysis/

Marketplace media published a report entitled “Homebuilders are constructing fewer homes … on purpose” (7.29.2021). Citing various sources, Marketplace report on conventional builders was oddly overlooked by most. You can hear the article via the embed player, below. That noted, here are some pull-quotes.

Pending sales of existing homes — deals under contract that haven’t closed — were down about 2% from May to June, according to data released Thursday by the National Association of Realtors. Apparently, stratospheric prices driven by a shortage of available homes are dampening enthusiasm to keep up the hunt.

It’s a similar story for new homes. Sales of those fell almost 20% in June from the same time last year. Would you believe some of that decline was intentional?

If you’ve been shopping for a house and haven’t already gone mad, this might do it: Homebuilder Pulte Group reported $500 million in quarterly profit this week and CEO Ryan Marshall told investors it could’ve been more. “We purposely restricted sales through lot releases or similar actions in roughly 75% of our communities across the country,” Marshall said.

The company sold fewer houses than it could have. On purpose.

“You could pick the phrase: it’s metering, it’s throttling, it’s intentionally slowing sales,” said economist Ali Wolf with research firm Zonda. According to Wolf, 85% of home builders are doing it. Given shortages of land, labor and materials, she said they can’t build houses fast enough.

“A builder could choose to sell a lot of homes, but then they’re going to have really unhappy customers who said, ‘You told me this would take eight months to build, why is it taking 12 or 13 months?’” Wolf said.

There is hope for frustrated buyers. Zonda’s Wolf said fewer builders are throttling sales now than they were last month. She expects backlog to clear sometime next year and new homes to start coming onto the market at a faster pace.”

That report was by Amy Scott, who is “Marketplace’s senior correspondent covering housing and the economy.”

Additionally, S2A, as MHProNews reported below, plans to build dozens of building centers or ‘factories’ in the next few years. These broader housing facts shed light on the puzzling-to-some question of why manufactured housing is underperforming during an affordable housing crisis.

Before adding one more revealing linked report, let’s sum up what the Marketplace and S2A insights should be telling objective thinkers.

Then, S2A is planning dozens of new modular home building factories. Clearly, they would not want to look stupid. Time will reveal what happens to S2A’s plans. But on the surface, it should be apparent than any such sincere plan means that they believe their firm could obtain the needed building materials, labor, transport, financing, or other items required to execute. If so, then why have some builders – think Manufactured Housing Institute (MHI) members such as Cavco Industries (CVCO) or Skyline Champion (SKY). If S2A thinks they can get all the labor and materials needed, then why does Cavco and Skyline Champion have shuttered plants, per their own public statements to shareholders?

These facts can lead a reasonable person to ponder this question: are at least some MHI members throttling sales, as Marketplace says conventional builders are doing?

If so, to what purpose?

To answer that, the formal complaint against Thomas “Tom” Hodges should be carefully reviewed.

Not to be overlooked is the odd-at-best misses by MHI CEO and the revelations from the SEC suit against Cavco.

Or, what about the odd-at-best alliance between MHI and several conventional-housing, rental housing, and other connected nonprofits? Why is MHI in alliance with its obvious housing competitors?

With paltering in mind, MHI has claimed that they are working for more lending in manufactured housing. MHI CEO Lesli Gooch, Ph.D., has stated her ‘disappointment’ that the Government Sponsored Enterprises (GSEs) and the Federal Housing Finance Agency (FHFA) have failed to fulfill their ‘3 year plan’ commitment to provide a so-called pilot project for more competitive manufactured housing lending. If so, then why didn’t Gooch and MHI sign onto the letter that to the FHFA that pressed them to force the GSEs to fulfill their Duty to Serve mandate requirements?

Kevin Clayton, among others, ‘stated the obvious’ by noting that better financing and more liquidity would yield growth for manufactured home producers. By implication, the reverse is true. If there are fewer and more costly lending options, then there will be fewer sales.

That being the case, once more, why didn’t MHI sign onto a letter with some of their own members and other ‘coalition partners’ that pressed the FHFA to make the Government Sponsored Enterprises (GSEs) of Fannie Mae and Freddie Mac actually follow the law that MHI claims they want enforced?

Or what about these facts. If MHI seriously wants zoning and placement barriers removed, and the “enhanced preemption” clause of the Manufactured Housing Improvement Act of 2000 enforced, then why haven’t they sued to get the law enforced?

When will merely complaining about the law’s lack of enforcement yield to actual action to enforce the law, as the Tiny House Hands Up and Institute of Justice suit is doing in a far more limited market?

A reasonable person, based upon the known evidence and common sense, can come to the conclusion that manufactured housing is underperforming because some key players inside of the industry – routinely associated with MHI – desire it the status quo.

Otherwise, why didn’t MHI’s board discipline or remove Gooch for her apparent conflict of interest in doing work for conventional builders while she is being paid to work on behalf of MHI? Recall the whistleblower documents that were provided to MHProNews, see the report below.

Michael Lebowitz laid it out over 3 years ago. Paltering is part of the Buffett-moat methodology. 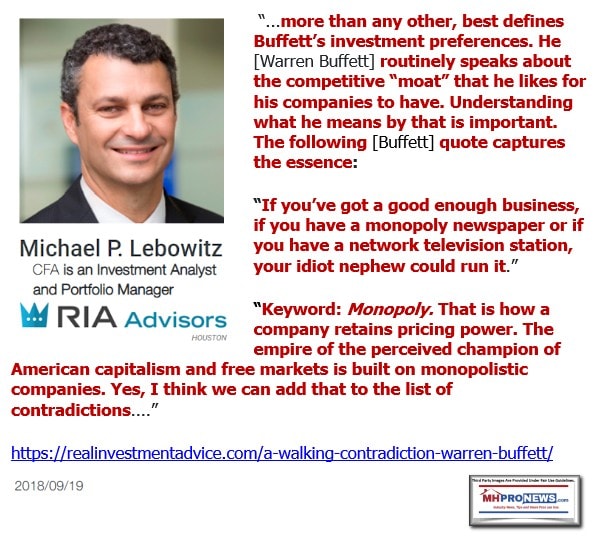 When the bulk of the evidence points in one direction, the principle of Occam’s Razor should be applied.

The potential upside for manufactured housing could be a rise to record numbers of new HUD Code manufactured home sales. That is what would logically occur if existing laws are enforced. The evidence from California is clear on what preemption alone could accomplish.

It’s not rocket science. Expose the misinformation and apparent wrongdoing every time it occurs. Then, enforce existing laws.

The irony is that MHI’s own leaders have at various times said as much.

Facts, evidence, and sound reasoning stand up to close scrutiny.  By contrast, as some have more bluntly and crassly observed – BS – no matter how clever – is just BS.  ### 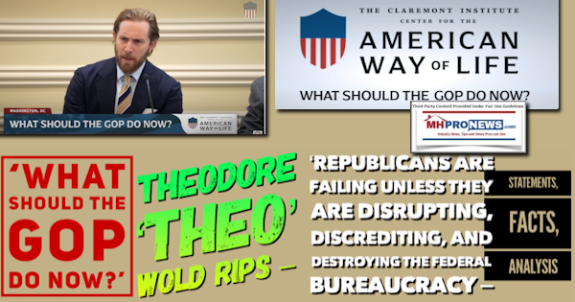 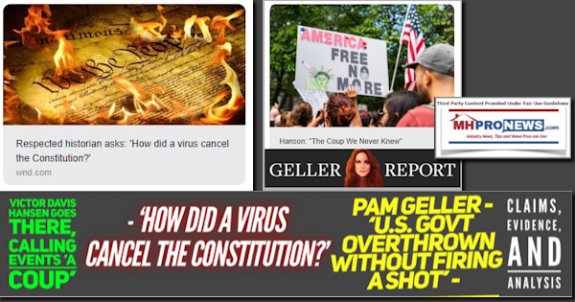 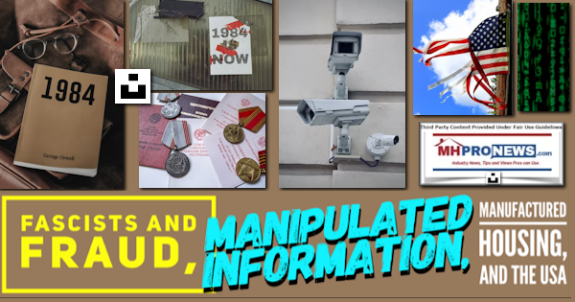 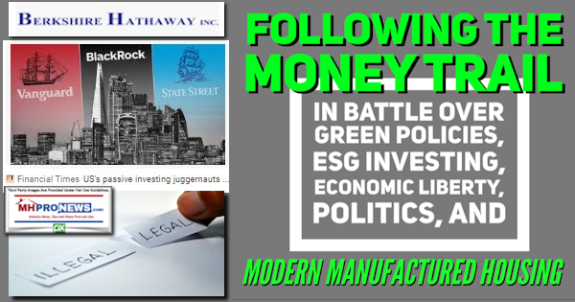