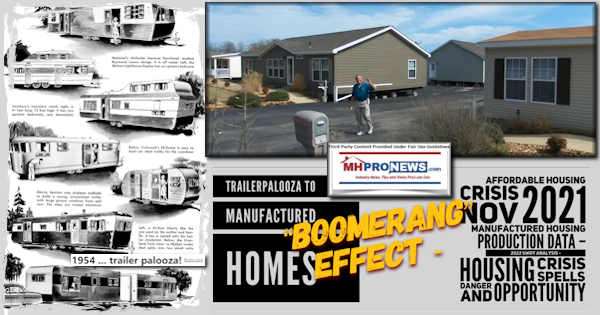 “When written in Chinese, the word “crisis” is composed of two characters – one represents danger and one represents opportunity.” – John F. Kennedy, per the JFK Library. Per Investopedia, a “SWOT (strengths, weaknesses, opportunities, and threats) analysis is a framework used to evaluate a company’s,” person’s or industry’s competitive position. This look at the latest manufactured home industry data will be framed against illustrated insights. The understanding gleaned by reflecting on the evolution from the ‘trailerpalooza’ and mobile home eras, into early manufactured housing (starting June 15, 1976) and finally into the modern manufactured home era. Given the widely acknowledged affordable housing crisis, why are HUD Code manufactured homes performing at only about 30 percent of the industry’s last highwater mark in 1998? Given the need for millions of new housing units, per an array of governmental and nonprofit sources, why has it taken so long for manufactured housing to perhaps cross the 100,000 annual production mark in 2021 for the first time in over a dozen years? Those are topics considered following the official data collected for the U.S. Department of Housing and Urban Development (HUD). The HUD data for total November 2021 new manufactured housing production is as reported by the Manufactured Housing Association for Regulatory Reform (MHARR). MHARR has also provided some related shipment data.

The facts and information from MHARR will be followed by a 2022-framed manufactured home industry “boomerang effect” reality check.  An insight from this classic ad below will be woven into the analysis and commentary that follows.

Washington, D.C., January 5, 2022 – The Manufactured Housing Association for Regulatory Reform (MHARR) reports that according to official statistics compiled on behalf of the U.S. Department of Housing and Urban Development (HUD), HUD Code manufactured housing industry year-over-year production increased again in November 2021. Just-released statistics indicate that HUD Code manufacturers produced 9,069 homes in November 2021, a 13.4% increase over the 7,996 new HUD Code homes produced during November 2020. Cumulative production for 2021 now totals 97,758 homes, a 12.6% increase over the 86,757 homes produced over the same period in 2020.

A further analysis of the official industry statistics shows that the top ten shipment states from the beginning of the industry production rebound in August 2011 through November 2021 — with cumulative, monthly, current year (2021) and prior year (2020) shipments per category as indicated — are:

The November 2021 data results in no changes to the cumulative top-ten shipment list.

In Washington, D.C., MHARR President and CEO, Mark Weiss, stated: “Notwithstanding the discriminatory zoning barriers and consumer financing challenges that continue to negatively impact the availability of affordable manufactured housing, 2021 industry production appears poised to surpass the 100,000 homes annual benchmark. If this comes to fruition it would mark the first time since 2006 that the industry has exceeded this historically-significant production level. While this is obviously a positive development that illustrates the strength and resilience of the HUD Code industry as the premier source of non-subsidized affordable housing for lower and moderate-income American families, any celebrations must be tempered with recognition of the continuing headwinds that the industry and consumers face going forward, including not only zoning and financing issues, but other regulatory matters as well, including the threat of excessive, high-cost DOE energy standards.”

American Psychological Association (APA) defines the Boomerang effect as follows. The “boomerang effect a situation in which a persuasive message produces attitude change in the direction opposite to that intended.”

It is often Manufactured Housing Institute (MHI) staff or corporate leadership who have made certain statements as to their goals and plans. Those claims are then subject to later recall to see how their words matched their deeds or the actual outcomes.

Also, MHI corporate leaders who have had to admit that manufactured housing is misunderstood. That is a kind of boomerang indictment of their own leadership.

There is an array of such “boomerangs” that are arguably striking MHI’s self-proclaimed leadership.

There is an array of disconnects between MHI’s words and the outcomes.

That said, the article linked below reflects a new research and reporting effort to shake up the status quo. This is part of the boomerang back at MHI.

As with any planted seed, the growth and effects of the above linked are likely to initially be subtle.  But this next phase of a multipronged effort has a simple yet profound goal. To provide white hat and honorable growth minded industry professionals with a proven pathway toward growth.

Stating the obvious can be clarifying and liberating. All sales are local. While national or even state level-data is interesting and useful, nothing is more relevant to a company or professional than what is occurring in the specific market(s) that the individual or firm is operating in.

That report above spells out the dangers from not acting, but also the opportunities to tap into the leadership vacuum that predominantly ‘leading’ MHI member industry firms allowed the industry to be trapped in a 2 decade plus cycle of underperformance.

The only way to change the results is to change the dynamics. MHProNews and our MHLivingNews sister site – in conjunction with selected operations, will be establishing the next phase of an already well-established foundation in manufactured housing trade media leadership.

Beyond the plan for more routine media releases that will showcase the good, bad, and meh in manufactured housing in a factual and authentic fashion, MHProNews will periodically provide mainstream and specialized media sources with columns that will be designed to open the eyes of their readers beyond our own profession.

This process that will set the stage for the educational, legal, marketing, and other efforts that can take manufactured housing over time in a more positive and robust growth direction.

One must never forget that the manufactured home industry used to outsell RVs by a ratio of some 3 to 2 in 1998. The RV Industry formed the GoRVing campaign in the 1990s, while MHI leaders dithered and talked about doing something similar for years. Today, the RV industry outsells manufactured housing by a ratio of some 4 to 1 over manufactured housing. This is one of a series of data-point that MHProNews will utilize in order to press for positive change and/or legal accountability for those in leadership at MHI and/or their state association affiliates. In 2020, the GoRVing campaign claims over 310 million were exposed to their marketing. Unlike MHI claims, the RV industry has the sales results that back up their boasts.

Let’s note that Berkshire Hathaway has serious interests in the RV and automotive industries. Berkshire has big interests in conventional housing, not just manufactured housing.  So Berkshire’s interest in Clayton Homes, their affiliated lending has to be considered in that broader picture. There are so many examples of success in other industries, that experience, logic, and corporate pronouncements on consolidation have to all be taken seriously. The logical conclusion is that when publicly traded MHI members boast of consolidating a fragmented industry, that is what should be taken at face value. Those companies are walking their talk. It is MHI that has the disconnect. That boomerang effect is hitting home, pardon the pun.

MHProNews/MHLivingNews, can, have, and will report on such matters. But additionally, we will be providing a protentional path ahead for those white had professionals and brands that are tired of the years of broken and failed promises. Happy talk fatigue is exemplified by Marty Lavin, who told MHProNews about the latest ‘happy talk’ article on why the public should consider manufactured homes: “I first saw this story in 1972 and it is repeated every year since, or at least the same general theme. A shame it never comes to pass.”

Why have so many MHI claims failed to be achieved? The case can be made that the root issues that keep the public, and thus others, from responding have never been properly addressed by MHI. Additionally, the case can be made that MHI is working for consolidators, and not for the industry at large, as they claim. Neither of these claims have been refuted by MHI. The boomerang of years of talk with no result is coming home to roost.

MHProNews/MHLivingNews will continue to report and promote accountability. But additionally, we will be promoting the alternative that white hat manufactured housing professionals can tap into to achieve growth on the local level.

Stay tuned for more as this plan evolves in 2022.

To sign up for our industry-leading x2 emailed news updates, click here or the link further below.

To learn more about opportunities for ‘white hat’ organizations that are seeking growth with high customer satisfaction, click here.

For inspirational and pragmatic tips from a respected professional, click here.

Here’s to shaking things up in 2022 by directly challenging the status quo and so-called industry leaders that have demonstrably failed – per the hard facts, evidence, comparisons, and data! – to have moved manufactured housing anywhere near the industry’s potential. ## 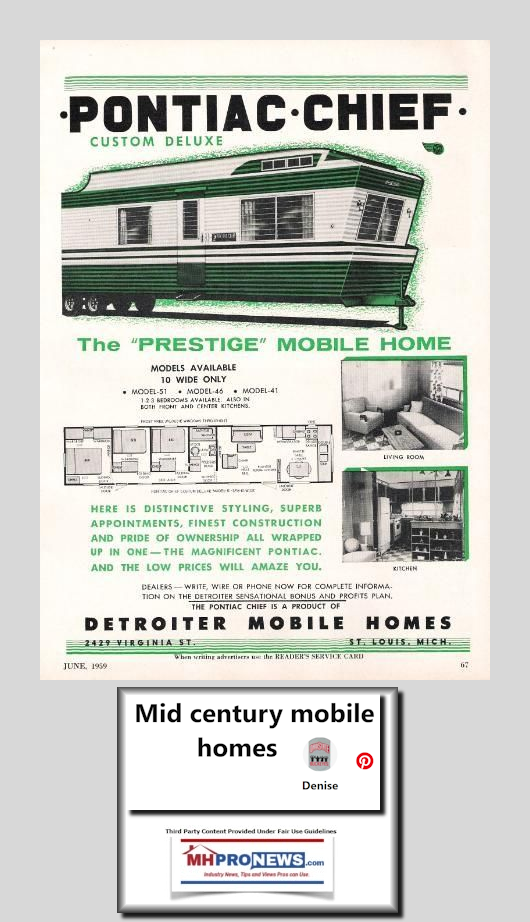 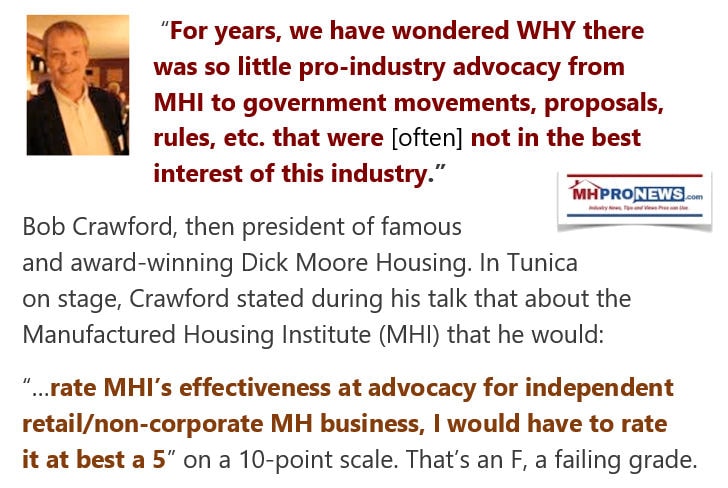