“”We can afford to lose money – even a lot of money. But we can’t afford to lose reputation – even a shred of reputation,” wrote Warren Buffett to managers,” according to a post on the Wall Street Journal’s Facebook page.

Now contrast that with the investment-focused Motley Fool’s citation of the famous Buffett quote: “Rule No. 1: Never lose money. Rule No. 2: Don’t forget rule No. 1.”

Do these two fabled Buffett quotes complement or contradict each other?

We deliberately avoid answering that today.

Ladies and gentlemen professionally involved in manufactured housing land – what we lovingly refer to here on MHProNews as MHVille – those Buffett quotes bear close scrutiny.

Beyond the words, so too does the actual behavior of Buffett and Berkshire Hathaway’s brands.

It is not that Mr. Buffett is necessarily wrong. As one of the top four wealthiest people in the world, he’s proven his ability to attract investment capital and make money for the long term.

The question is, how has Buffett achieved that wealth in recent years? Say the last two decades?

No two people agree on everything. We need others in our lives as reality checks. If Marty Lavin never gave MHProNews any more on-the-record quotes than those already given, the ones we have from him are highly valuable to those wise enough to grasp and apply them routinely. It isn’t that Marty invented these sayings; he did not. But as a significantly successful person in manufactured home financing – with real manufactured home (MH) community and high-volume MH retail experience – what he said is as useful – perhaps more so – as those Buffett quotes are. Once more, with gusto…

These Lavin tips have been used by detectives, serious reporters, and other researchers for decades.

What they point to, without saying it, is the value of authentic history.

Let’s pair that with what pro-manufactured housing investor Robert Robotti said about investing. “In order to outperform the market, you have to have a contrarian point of view,” Robotti said to the Motley Fool investment media.

But in order to achieve a breakthrough, one has to be able to step out of the box. If someone stays only inside the box, by definition, no progress is ever made.

We need to be able to celebrate the good that someone has done, while recognizing that they are bound to have flaws. Let’s give some examples, and then return to the profitable MH theme.

We like many of the quotes that the Reverend Martin Luther King, Jr. has given us to ponder. He was surprisingly successful, but that success was not overnight. It took time, persistence, a kind of urgent patience. King was wise, but he was reputedly also a womanizer. Can’t imagine that his wife liked that reputation, can you?

A couple in the White House today have a similar challenge. But unlike the defense that much of the mainstream media gave Bill Clinton while he was president, or the cover for womanizing given to John F. Kennedy while he was president, Donald J. Trump’s past womanizing is treated quite differently. Before he ran for president, Mr. Trump was celebrated for the same thing he is now denigrated for doing. What’s up with that? That’s not to attack the other 2, nor to defend the 45th president on that score. It is only to reflect that a double standard exists. It is also to reflect how helpful history is. Now, let’s take that back to MHVille.

People have to be able to discern reality, to find what is true, and separate the ‘wheat from the chaff.’ There are things Mr. Buffett has said that are insightful, useful, and true. That doesn’t mean I have to agree with Buffett’s reputed business practices. Wheat from chaff. Discern what is useful, then act upon that, and your odds for success go up.

Before diving into our weekly headline review, and we have some doozies for you, let me make one more observation. There have been some famous – but later convicted – con men in our nation’s history. People who were so respected, until they were found out. Once exposed, they where then reviled. Let’s mention only one to make the point.

Bernie Madoff is described like this by Wikipedia, “Description: Bernard Lawrence Madoff is an American former market maker, investment advisor, financier, fraudster, and convicted felon, who is currently serving a federal prison sentence for offenses related to a massive Ponzi scheme.”

Madoff was celebrated, until he was vilified. By the way, not all cons are alike.

Now will the day may come that fans of Buffett — or an infinitely lesser light in MHVille, part-time magician George F. Allen — feel the same about them as they do now about Madoff?

Some sing the praises of the Manufactured Housing Institute (MHI). But look at the fact that every one of the corporate industry embarrassments in MHVille named by John Oliver’s “Mobile Homes” video was connected to a firm connected to MHI. Pray tell. What exactly are the leaders at MHI being celebrated for accomplishing? Other than the increasing consolidation occurring in MHVille?

Cons are often celebrated, until they are finally understood, and then they are fully exposed. Some cons, like Madoff, go to prison.

To grasp those highly profitable lessons, one needs the perspective of history. That requires real history, not fake history. Discerning the truth requires real analysis, not fake analysis.

To be sustainably successful in MHVille, one needs to know when to duplicate – as in a training the line workers in a factory – and when to innovate. The later – innovation – means you have to be willing to be a contrarian at the proper times.

Before closing, let me tip the hat to Jim Ayotte for a statement he made that applies to everyone, not just top-tier association executives. “As an association executive, my job is to assess the situation and seek the best possible outcome based on the facts as I know them.” Publishers, writers, sales professionals, business owners, line workers – everyone could apply this principle Ayotte made to themselves.

None of us don’t know what we don’t know. That’s why we need others! But once we begin to suspect something different than what we thought we knew, it becomes parament to pivot to whatever that liberating – and often profitable – truth is. Albert Einstein was right in saying you don’t keep repeating the same mistakes over and over if you plan to progress.

The reason that a con like Madoff’s or others arguably succeeds for as along as they do is because people are not willing to admit that they have been conned. They are in denial. They may be embarrassed. Or they may have some other fear.

But the mature, secure adult admits an error. If the error is that they were conned, one must make that admission, but then the solution is to move beyond the error. That’s how profitable learning is done. Objective history is a vital part of that process.

To my knowledge, there is no other manufactured home industry publisher that has the degree of historic and practical insights into manufactured housing reality than we do. Not bragging, it is what it is.

most-read in MHVille – by fans, foes, and profitable truth-seekers alike? People put up with our typos because we have something worth putting up with.

We are getting a growing number of calls and messages from investors and their representatives. They don’t buy the Arlington line. If those outside looking in don’t buy it, why should you? Folks, the industry is about to go through a shakeup. I’m not predicting a date, but don’t just mark your calendar. prepare for it yourself. Start with staying truly informed, and avoid the deceptions that profit others but are costing independents, perhaps like you.

With no further adieu, let’s dive into the headlines from the varied corners of MHVille during the week that just was.

In a truly free enterprise system, various needs are identified. Then a means of profitably yet honestly serving those needs are established. Ideally, both the customer and product/service benefit. The happy customer(s) then tell or send their friends. That pattern repeated often enough yields success. For millions, perception is reality.

Jobs Surge in April, Unemployment Rate Falls to the Lowest Since 1969, plus Manufactured Home Market Updates

Cowards, How Winning Is Done, and Manufactured Housing

Cowards, How Winning Is Done, and Manufactured Housing

Holocaust Remembrance Day, You Don’t Know What Tough Is, and Ramadan

Holocaust Remembrance Day, You Don’t Know What Tough Is, and Ramadan

Last night, the Daily Business News on MHProNews looked at regional data that revealed 3 states with increases, but 3 others with significant declines in new manufactured homes shipped. Now, in our pre-dawn report, multiple tips from members of the Texas Manufactured Housing Association (TMHA) provided their state’s latest – …

Cruise Ship Retiring at Sea? Will it Eat Into 55 Plus Community or Assisted Living? Plus, Manufactured Home Market Updates

Cruise Ship Retiring at Sea? Will it Eat Into 55 Plus Community or Assisted Living? Plus, Manufactured Home Market Updates 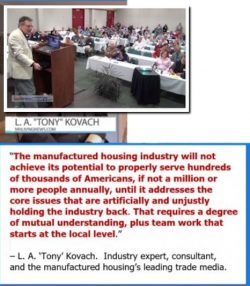 Most of human history is a story of the struggle for authentic freedom against various forms of limitations, captivity, or enslavement. Much of history is the hidden or open battle between the truth and a captivating lie. People are often offended when lied to, and for good reason.

Think triple damages potentially worth millions to some pros that you know, and billions collectively as you read this. You, a friend or colleague may be entitled to it, and you may not even know it. It may be easier than you think. That will be explained further below.

Both of these messages are from the same person. There will be an upcoming report with on-the-record comments from an MHI board member. The company of the professional quoted below has been a Manufactured Housing Institute (MHI) member for a number of years, and is not a member of the Manufactured Housing Association for Regulatory Reform (MHARR).

What’s wrong is that enough people don’t ask what’s right – that’s a faithful paraphrase of the brilliant writer and believer, G.K. Chesterton. One need not look far to discover that the Creator of all has a healthy sense of humor.

When someone is introduced to manufactured homes and their tremendous value, they are often shocked. ‘ How is this much home for such a modest price possible?’ A key part of the answer mirrors any product produced in a production center. Cars built in a driveway would cost far more than a car built in production center.