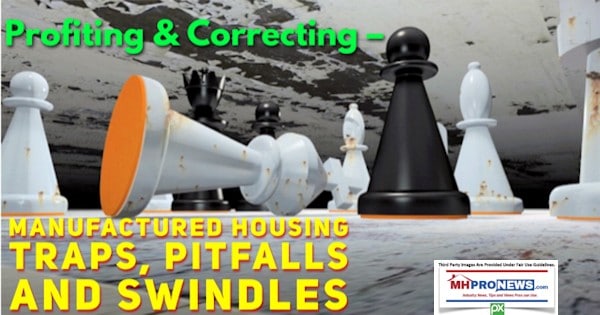 Think triple damages potentially worth millions to some pros that you know, and billions collectively as you read this. You, a friend or colleague may be entitled to it, and you may not even know it. It may be easier than you think. That will be explained further below.

I can picture in my minds eye a couple I met at an Illinois Manufactured Housing Association meeting some time back. They were seniors. They were pleasant, well spoken, and successful for decades in the manufactured home community ownership arena.

But at the time we met, they were facing a crisis with their community. For years, occupancy had trended down. Their business model, as was true if thousands of other community owners for decades, depended upon so-called ‘street retailers’ to sell homes into their community.

When thousands of street retailers vanished in a matter of years, land-lease community owners like them lost a leg in their business model’s 3 or four legged chair. A series of other events in the late 1990s into the 2000s hurt them as it did others.

With dwindling occupancy, deferred maintenance became critical. Those often turn into headlines that for some years now are among those that has haunted land-lease communities – and by extension, the rest of the industry – in news stories and headlines like those shown below.

Mainstream media reporters may or may not be aware of those background dynamics. All they know is that sewer lines that once worked fine, are now a problem. Or water systems may need updating, but haven’t been properly care for due to such economic challenges.

Rephrased, take out retailers, and a series of other events created a cascade effect that continues years after those ‘street dealers’ vanished. Factories that supplied those retailers were shuttered. Lenders and financial services firms lost a once steady and dependable stream of business. Suppliers, transporters, installation, workers of all kinds are harmed.

Nor can manufactured home resident impact be overlooked. Resale values, the entire normal supply and demand chain equilibrium is disturbed.

All of that occurs by removing thousands of independent manufactured home retailers.

Much of the industry and its home owners has yet to recover. Headlines like the ones below hit mainstream news. Of course, it’s a turn-off to prospective manufactured home buyers. 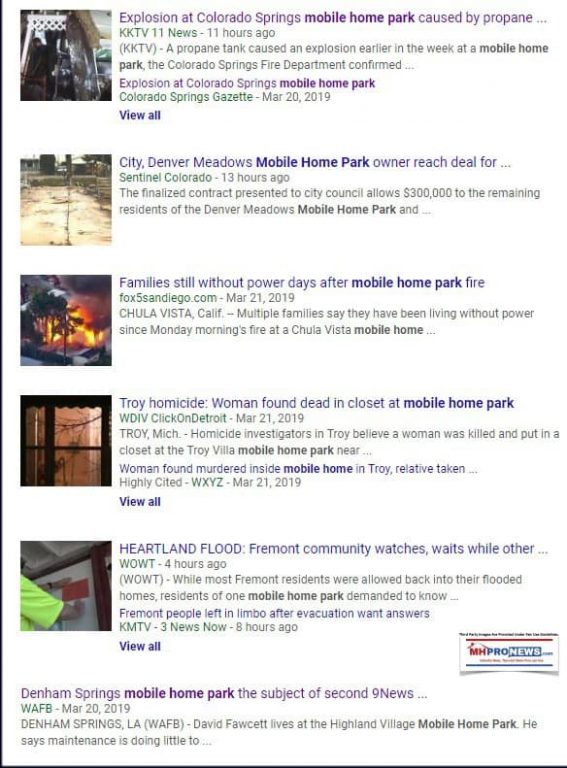 Then, ponder the effect of a vertically integrated firm like Clayton Homes and their Berkshire Hathaway sister companies. When you have essentially an unlimited pool of capital, you can afford to lose money at dozens of locations. Never forget that Kevin Clayton said on camera that it would be okay with “Warren” if he lost money for five years, as long as Clayton was widening its “Moat.”

It is simply impossible to fully grasp the impact that kind of strategy has on the industry, until it is carefully understood.

The problems mentioned above then create “value acquisitions” for consolidators. So while Berkshire Hathaway benefited, because Clayton Homes expanded its Moat from some 13 percent to about 50 percent of the market in just 15 years, it also made it easier for several larger community operators to buy distressed communities. Those distressed communities may have operated just fine for years.

The residents in those once properly operated, but years later turned into distressed neighborhoods were suffering the impacts too.

A few “won.” Thousands of independent businesses lost. Millions of Americans were impacted.  But even big boy companies are harmed today, because the image of living in a manufactured home community was shifted over time from happy to problematic.

That’s just one part of the cause and effect of the traps, pitfalls, and swindles that have cost Americans tens of billions of dollars. A few benefited, but at what harm and cost?

This is a topic worthy of debate. Kevin Clayton, Tim Williams, their attorneys ought to explain or refute the evidence, if they can. Joe Stegmayer, MHI Chairman, a former president at Clayton Homes ought to stand before their industry peers and explain the documents, direct quotes, and video recorded statements if they can.

They and their purported puppet association in Arlington, VA have the right to remain silent. Never forget that for years, they each promptly responded to questions from MHProNews. It was about two years ago that all that publicly changed. But what they can’t erase are the impacts on the industry. Nor can they erase the times they publicly praised MHProNews in writing, verbally, or even on video.

These problems are opportunities in disguise. Time will tell if Clayton et al will appear before their industry colleagues next Thursday afternoon and explain the documents, quotes, money trail, trend lines, and evidence compiled here or on MHLivingNews over the years.

But if they come or not, be one of those who see, listen and learn how the pains of the past and present can become a silver lining to a dark cloud.

Several ways. We will mention only one today, but more ground will be covered next week, in person and live. The opportunity for class action lawsuit that are handled by plaintiffs attorneys who will sue those responsible on contingency.

That harm artificially caused could logically extend to millions of manufactured home owners, because their resale values have been impacted by such purported market manipulation.

That harm also extends to those whose businesses were sold at a discount or failed all together.

Manufactured housing has seen several large class action lawsuits over the years. It remains to be seen if the SEC, which won’t confirm or deny that they are studying market manipulation in the Cavco Industries case, will dig into such matters. It remains to be seen if shareholders attorneys are going to look into these issues. Why should they? Because if Stegmayer as a former Clayton executive understood all this, and did it didn’t do certain things at Cavco, it obviously impacts business performance and share holders stock value.

It may not pay independents and others on the spot to be at the Tunica next Thursday, March 28, starting just after 12 noon. But it could be worth millions to some businesses, thousands to millions of home owners.

Profiting & Correcting – Manufactured Housing Traps, Pitfalls and Swindles
You or a Colleague’s Opportunity to Collect 3 Times What You Lost

Plaintiffs’ attorneys inform MHProNews that such cases can bring triple damages.  As most readers will know, a contingency lawsuit means that the attorney bears the brunt of the costs and risks. The only reason they take on such a case is because of their confidence in winning it.  You or other victims don’t even have to know how it happened to you.  You only have to have been a victim in order to participate in such a potential landmark case.

Please RSVP for Tunica next week for session 1. It’s open to legitimate industry members who are coming to participate or learn. We are seeking to expand the meeting room space from what was originally reserved. Details will be updated via our emailed headline news, so make sure you are signed up.

There will be a Q & A after each session. To learn more, click here the linked article above or further below the byline and notices.

Sign Up for our headline email news updates Today!