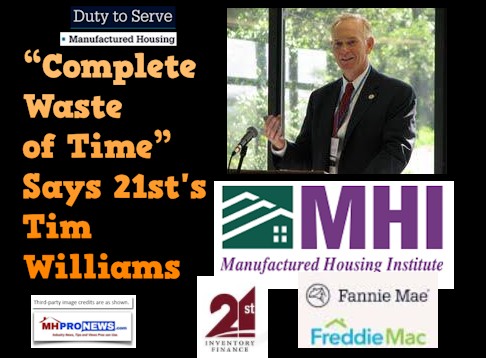 The 45th President of the United States (POTUS), Donald J. Trump, and Berkshire Hathaway Chairman Warren Buffett have very differing political views. But there is an area of agreement that yields a valuable takeaway for any manufactured home professional to grasp, and adopt.

Warren Buffett invests the time, and learns what to do – and avoid – by reading.

That investment by Buffett in the time to study, and then makes informed decisions, are one of his ‘secrets’ of success.

That studious reflection, says Buffett, reduces his risks, and increases his odds of success.

Similarly, President Trump has said that it pays to know as much as you can about something that impacts you, your life, and profession.

Those bookend principles from POTUS Trump and Buffett were noted in the Daily Business News post, linked below.

Historical knowledge and understanding, properly applied, are among the key elements – the fundamentals – which yesterday took the shares of Buffett-led BH to its record high of $300,000 each.

Those principles of reading, understanding, and then acting accordingly should be routinely applied to the words and deeds in the manufactured home (MH) industry.

Williams – as many industry professionals and investors know – is the president and CEO of 21st Mortgage Corp, a Berkshire Hathaway unit, and sister company to Clayton Homes, and Vanderbilt Mortgage.

So stated a document signed by Williams, that was obtained by MHProNews. That 21st document from Williams, provided to the Daily Business News as a tip from a reader, is found as part of a related report, linked from the graphic below.

In 2013, in an exclusive interview with MHProNews, Williams said that pursing the Duty to Serve was a “complete waste of time.”

What follows is the full text – and thus the context – for Williams’ reply on DTS, with the entire interview linked here.

“I think it is a total waste of time to talk about DTS until Congress reaches a consensus on the GSEs. Will the GSEs exist as we know them? What will be their mission? I think it is a million to one shot that the FHFA and either of the GSEs agree to finance chattel manufactured homes while the larger issues remain unresolved,” Williams said.

Williams would especially be correct in his “a million to one shot” observation, if:

In other words, if you stack the deck against the GSEs doing something substantive, the odds could indeed go to “a million to one,” observes our publisher.

In San Antonio, TX, in a 2017 meeting with a few dozen industry professionals that that are members of the Manufactured Housing Institute (MHI) in the room, Williams stated that 21st had not turned over data requested by the Government Sponsored Enterprises (GSEs).

So, while a few dozen industry professionals in that room may have heard that statement by Williams – who was then MHI’s chairman – there are thousands of MH professionals who were obviously not present.

Depending on how many read-and-trust only MHI messages – they might have a completely different impression than what Williams said in that meeting room.  After all, MHI claims via their messages, such as those attributed to Leslie Gooch, Ph.D.,  to be working to promote DTS.

The GSEs – or Enterprises – of Fannie Mae and Freddie Mac, citing a lack of data as a reason, is only lightly putting its toes into the MH industry’s chattel lending markets, as part of a plan published by the Federal Housing Finance Administration (FHFA), linked below.

On the one hand, there are apparently contradictory positions between actions, and statements made freely by Williams, and by the Berkshire Hathaway dominated Manufactured Housing Institute (MHI), as noted above.

There are also the previously quoted principles of BH Chairman, Warren Buffett.

On the one hand, Mr. Buffett publicly supported Hillary Clinton, and Barack Obama before her.  Obama, Clinton, and Buffett all voiced support and/or acted in favor of Dodd-Frank.

So on the other hand, Williams and company at MHI have been pushing the “Preserving Access to Manufactured Housing” act, even though it seemingly put Williams at odds with Buffett on Dodd-Frank.

It also puts Richard “Dick” Jennison, Lesli Gooch (Ph.D.) at odds with the former MHI VP, who correctly predicted that with President Obama re-elected, it was unlikely that MHI could pass Preserving Access.

Any industry member, investor, or researcher who invests the time – which POTUS Trump, or Buffett’s advice would require – will discover so many disconnects between what is said by Berkshire Hathaway led MHI, and what look to be clear contradictions made by senior staff and/or their executive committee member(s).

No wonder MHI SVP Rick Robison, refused to take questions from MHProNews, in an verbal admission made in front of dozens of industry members.  How could he intelligently defend the national trade association, when there are so many obvious contradictions and inexplicable behaviors?

Bullet Points the Industry Must Consider

“People often tend to give those that we know the benefit of the doubt, until proven otherwise,” said L. A. “Tony” Kovach, consultant and publisher of MHLivingNews and MHProNews.

“Tim [Williams] is an intelligent, successful, driven professional. Jim Clayton sang Tim’s praises. Most would say, Tim’s a likeable gent. So, is it any wonder that it may be hard to imagine that Tim Williams – or Berkshire Hathaway’s Clayton Homes, Vanderbilt, or their affable billionaire, Warren Buffett – are all to various degrees initially trusted?” Kovach asked.

“But there comes a time when one must look at the patterns of verbal claims, the actions that follow, and the outcomes, and then ask the deeper questions,” Kovach said, adding, “That’s where Marty Lavin’s rules must be applied.”

“Let’s recap,” said Kovach, “with these bullets.  It could serve as an executive summary.”

“There comes a time when it is necessary to admit the obvious; that one has been misled, taken in, or whatever allegation and terminology one feels comfortable saying,” Kovach opined.

On issue after issue, MHI routinely follows the Berkshire Hathaway lead, as voices from inside and outside the industry have observed.

First, the readers digest version, then the details. Last week, the WVHI sent out their newsletter with a column apparently written by their co-president, George Gunnell. Gunnell is an RVP for Clayton Homes. That article and others in the same newsletter indicated that MHI wanted Pam Danner ousted from her role at HUD.

In addition to the concerns voiced from within the industry, are those that have come from outside of MH.

Is it possible to have so many items that are arguably against the best interests of most of the industry? While at the same time, promoting efforts that benefit BH – directly or indirectly – often being paid for by small-to-mid size MHI members?  It’s so bold, that it is easy to understand why some struggle to accept the obvious.

In a release to Daily Business News today, the White House Press room touted the president’s “return to principled realism.”

Realism – believing in what is, rather than some wish, dream or fantasy that someone may want to believe – is how a person, business, industry, or a nation can advance.

Author Aldous Huxley said that those can learn who are open to learning.

Prior “rough rider” and President Teddy Roosevelt is credited with making the following quip.

Only those willing to break with the chains of the past will be able to advance into the future of a brighter potential for their own operation’s potential within the manufactured housing industry.

No less than 4 different sites are currently promoting a new post-production association for manufactured housing.

Why?  Why yet another national trade organization for manufactured housing?

Isn’t the movement there because independents paying dues to MHI are arguably feeding the hand that bites them?

For those MHI members who are tired of years of unkept promises, and who have watched other companies get gobbled up by the industry’s giants, isn’t the time to stop whining and start acting, now?

It is instructive to note that MHARR – annually outspent perhaps by some 6 to 1 (+/-) – was able to stop MHI and DOE combined.  MHARR is proof that intelligent, educational efforts can defend, and advance, the industry’s interests.

MHProNews plans to publish a second 21st document- also signed by Tim Williams/21st, like the one linked above – later this week. Stay tuned.

If you have 21st Mortgage floorplan documents from circa 2008, 2009 to 2010, please consider sending those into MHProNews as a news tip for publication. Please white out your personal and company information, and thus your anonymity will thus be protected.

Submitted by Soheyla Kovach to the Daily Business News for MHProNews.com

Dave Ramsey, Ramsey Solutions “Why Are Mobile Homes a Bad Investment?” Corrections Requested – “It Would be Smart to Save the $100,000, Right? Wrong!” Claims Ramsey – MHProNews Facts & Analysis