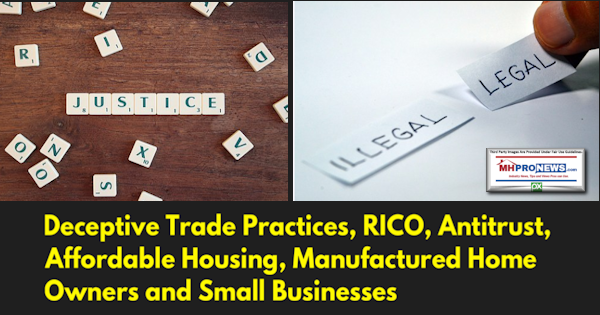 Two of the most important topics that impact Americans are arguably affordable housing and what political leaders across the left-right divide have called a ‘rigged system.’ That could in several cases be summed up as violations of deceptive trade practices, RICO, antitrust, and other federal laws which have state counterparts, or which federal officials tell MHProNews that can be enforced by a state attorney general.

With that tee up, what follows are my comments to the State of Florida attorney general’s office submitted electronically today. The gist of those comments are found below.

During the run-up and fall out of the 2008 financial and housing crisis we heard the expression “too big to fail” often. But what some have noted, some appear to be ‘too big to jail.’ When partisans say that ‘no one is above the law,’ that notion should in fact be the standard applied to the often powerful personalities and organizations that will be the focus of this fact-evidence and ‘follow the money’ methodology used by investigators. These are issues we’ve as our industry’s largest and most read trade media have researched, studied, and reported on for several years, so they should be given the appropriate attention.

The issues are both simple and complex. The proper enforcement of a few federal laws would make significant and positive changes beneficial to those who desire and need affordable housing. Why those federal laws are not being properly enforced is often due to a web of private special interests that at times work with public officials to bend the enforcement/non-enforcement of certain laws to their own benefit. Details will follow which makes clear that this behavior violates specific and several laws.

The bulk of the transactions would be finance, but there is no dropdown for that category in the Florida Attorney General’s complaint form, but cash sales also applies.

My apologies in advance for any typos in what follows. We stay busy, and if I had more time, I’d refine this further. But a FL Congressional legislative director asked me to submit to you what we have already provided to them and others. That office and other federal officials on both sides of the political divide have found what follows to be compelling. That FL representative’s LD believed what follows is serious enough to ask your office to investigate.

The bulk of the transactions would be finance, but there is no dropdown for that category in the Florida Attorney General’s complaint form, but cash sales also applies. The amount in question would be over $1,000,000,000.

It is also worth noting that several 2020 Democratic contenders for their party’s nomination for the presidency have signed onto a letter that raises some related issues. See that report, linked here.

Having set the table, let me begin, in no specific order of importance, a few key elements of the concerns that this writer is asking the State of Florida, and possibly other states, to investigate.

Several links will follow that relate to reports that are cross linked to additional information. In no particular order of importance.

See the related reports linked above, below, and further below the byline and offers. That’s Manufactured Home “Industry News, Tips, and Views Pros Can Use,” © where “We Provide, You Decide.” © (News, fact-checks, analysis, and commentary. See more below the byline, notices and sign up for our free x2 weekly emailed headline updates.) ## See Related Reports, further below. Text/image boxes often are hot-linked to other reports that can be access by clicking on them. Third-party images and content are provided under fair use guidelines.) 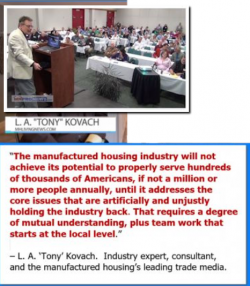 What is happening to VW’s executives is not a precise analogy to what could occur in the U.S.A. with manufactured housing connected publicly traded firms. German law is not U.S. law.