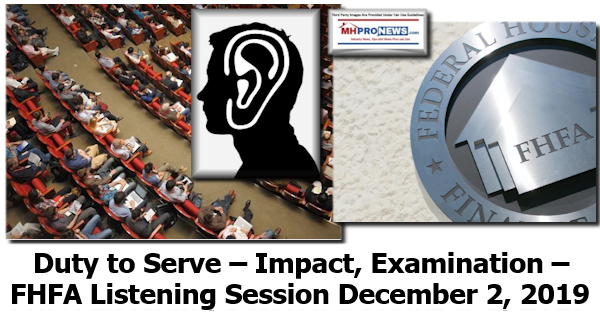 What follows the first illustration below are the comments as prepared for presentation for the Washington, D.C. Listening Session at the FHFA offices on December 2, 2019.  None of the videos or other illustrations will be part of the verbal presentation. 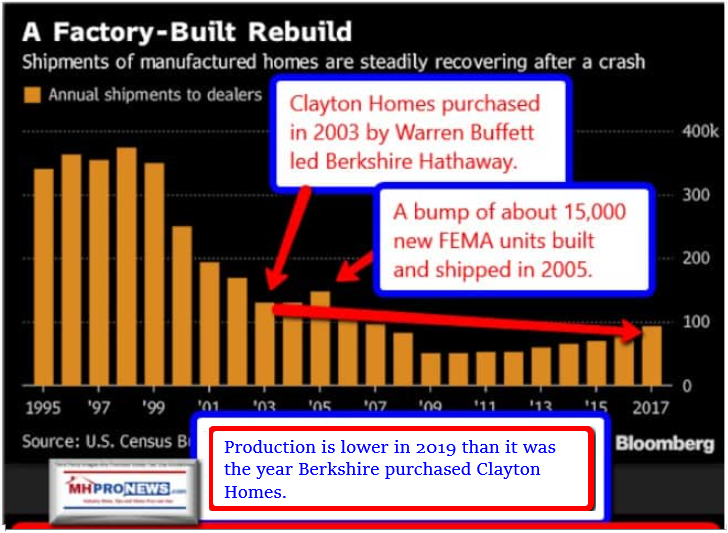 The Duty to Serve Rural, Underserved, and Manufactured Housing Markets was enacted as part of the Housing and Economic Recovery Act (HERA) of 2008. The law passed by a widely bipartisan margin.

Over a decade later, there is little to no discernible support for the vast majority of HUD Code manufactured homeowners, those seeking affordable housing, or the retailers and others who sell manufactured homes.

Data supplied by the Government Sponsored Enterprises (GSEs) of Fannie and Freddie prove that point.

As a trade journalist who publishes the runaway largest and most-read professional media in our industry – MHProNews.com – and as someone who is also a multiple award-winner in history and manufactured housing, those opening facts beg several questions.

But let’s begin with statements instead.

Years of research and reports could be boiled down to this claim.

Good federal laws are on the books that support manufactured housing on paper but are going under-enforced and/or are being ignored.  DTS is one of them.

A decade after HERA and DTS passed, where is that secondary market?

Interested parties should look at various letters submitted to FHFA about the current plans and proposed modifications requested by the Enterprises. The Manufactured Housing Institute (MHI) letter by EVP and CEO-elect Lesli Gooch makes some interesting and accurate statements, but also pivots to items that are arguably paltering.

Instead of Gooch making a case for robust support of all HUD Code manufactured homes – which is what one might reasonably expect of the trade association claiming to represent all segments of manufactured housing – instead MHI promotes their so-called ‘new class of homes’ recently dubbed “CrossModTM homes.”

Why didn’t MHI pursue robust lending for all manufactured homes, instead for only select “CrossModTM homes” backed by Clayton Homes, Skyline-Champion, Cavco Industries and some MHI member producers?

How did Fannie and Freddie magically establish a special program with specs for those so-called “CrossModTM homes,” reportedly developed in closed doors meetings with MHI?

Why haven’t the minutes for those meetings been released?

As MHI member-producers pointed out to MHProNews, there has long been lending on modular housing on par with conventional housing.

It was illogical and insulting, say those sources, to create a so-called new class of manufactured housing when some of those same factories already built modular coded units.

We have no problem with what products builders want to produce that comply with regulations. But we do have a problem with special lending extended to favored MHI firms by the GSEs with the FHFA’s consent.

HUD Code builders have always had the ability to build manufactured homes to minimum federal standards which provide durable, safe housing with consumer protections affordable for people with lower incomes, as well as more residential style-housing that has more features at a higher cost.

There was therefore no logical reason to create a new class that blurs the line between modular and HUD Code, including through the name of the product.

I’ve personally spoken with people at the GSEs and/or who performed contract work for the Enterprises. Some said the Freddie Mac Choice and MH Advantage by Fannie Mae plans are not how such lending programs are traditionally developed.

Do the GSEs tell site builders how to build their housing units?

Richard Genz did research for the Fannie Mae Foundation published some 2 decades ago. He made the case that manufactured homes were unfairly stigmatized.

MHI and the GSEs vaguely admit this new class of ‘CrossModTM homes’ is off to a poor start in the marketplace. New HUD Code production is also down year-over-year. Coincidence?

Given that FHFA as well as the National Association of Realtors in 2018 both reported manufactured homes appreciate, the lack of logic for plans developed by MHI, Fannie, and Freddie behind closed doors is stunning.

The Urban Institute said in 2018 that a lack of lending likely keeps existing manufactured homes from appreciating even more than they already do.

Rephrased, the status quo unduly punishes millions who currently own a manufactured home who could have higher equity and resale values if DTS were fully enforced. That’s billions of collectively lost wealth for manufactured homeowners. When more realize that, there are voters among those 22 million Americans and 111 million renters.

We’ve published an online version of this comments letter on the Masthead Blog on MHProNews.com. It includes illustrations, videos, links to comments, plus historic information by others and us.

We believe evidence and reason suggest that one or more at FHFA actively or tacitly allowed the law to be foiled in a fashion benefiting a few at high cost to the many.

That implies incompetence, collusion, conflicts of interest, and/or corruption.

Therefore, the FHFA has no legal or logical choice but to reject currently promoted plans and call upon Fannie and Freddie to immediately follow the DTS law, no matter whose deep pockets that may upset.

The FHFA and Congress should independently investigate how it’s possible that a decade after this good DTS law passed that it’s still thwarted from providing affordable lending to potentially millions of Americans during an affordable housing crisis.

The status quo is a scandalous disgrace. Thank you.

That’s the comments as prepared, sans the illustrations, for what will be presented at the FHFA Listening session in Washington, D.C. on December 2nd, 2019.

That’s food for thought for manufactured home “Industry News, Tips, and Views Pros Can Use,” © where “We Provide, You Decide.” © (News, fact-checks, analysis, and commentary. See more below the byline, notices and sign up for our free x2 weekly emailed headline updates.) ## See Related Reports, further below. Text/image boxes often are hot-linked to other reports that can be access by clicking on them. Third-party images and content are provided under fair use guidelines.)