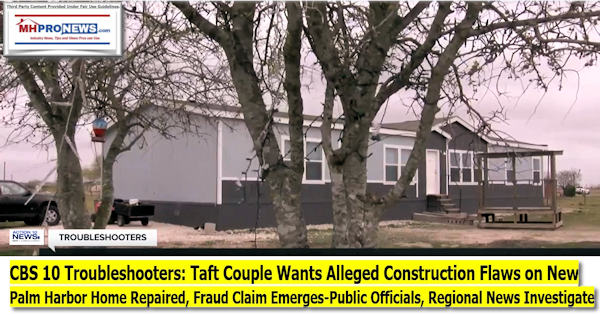 Not every problem faced by the white hats and consumers of the manufactured housing industry can be connected to a brand that is a member of the Manufactured Housing Institute (MHI). Palm Harbor manufactured homes has enjoyed a largely favorable reputation in the manufactured home industry for years. Additionally, it must be noted that far more costly conventional builders have customers who experience problems as or more serious than the ones alleged in this report, as a mainstream and trade media report linked here reveals. Those disclaimers plus items for fairness, accuracy, and balance noted, this MHProNews Masthead report, analysis, and commentary will focus on a problem that Cavco Industries (CVCO) – Palm Harbor’s parent company – upper management declined to directly address when this publication asked them for comments on this specific issue reported by KZVT CBS 10 in Corpus Christi, TX earlier this week.

The following two “CBS 10 Troubleshooter” video reports were filed by reporter Andrew “Andy” Liscano. Per the KZVT 10 website, “Andy Liscano is co-anchor of Action 10 News at 5:00PM.” “While his emphasis is on investigative and Troubleshooter stories, he also reports on city hall, the courts, police, spot news and breaking news.”  The veteran journalist “Before transitioning to news, Andy was an award-winning sportscaster in cities from Miami to Los Angeles.” He has been with the CBS 10 team since 2007.

The quotations that follow are from CBS 10’s website from the respective linked report, where additional information can be obtained.

CORPUS CHRISTI, Texas — A Taft couple bought a $220,000 manufactured home a few months ago, however, they’ve pointed out several construction flaws that they want repaired. While they have reached out to the company that sold them the home, nothing has been done, so they’ve called the Troubleshooters for help.

Doug and Stephanie Holder call their new home their ‘forever’ home for their family. A 2,400 square foot home on three acres of land that they moved into in February.

But they said they called us because they wanted to show us the flaws in its construction. Flaws they’ve been asking Palm Harbor Homes to repair, repeatedly, yet no repairs have been done.

As Stephanie puts it somewhat emotionally, “we’re basically begging for help. None of this is our fault. We had nothing to do with the set-up. We paid people to do it. They were supposed to be qualified to do it.”

The Holders claim their electric bill has tripled in cost, their water bill has increased, their Smart toilets keep running, and dust blows into their home through openings in the doors.

In March, the Holders sent an email to Palm Harbor Homes “demanding a resolution”.

She…claims Palm Harbor Homes has tried repeatedly, and unsuccessfully, to contact the Holder’s to get this resolved.

So the next step, according to Rogers, is the Holders need to contact the Texas Department of Housing and Consumer Affairs, to set up a time and date for all three sides to meet at the home to determine what the issues are.”

It should be noted that the Texas Department of Housing and Consumer Affair (TDHCA) is Texas’ contact for “The U.S. Department of Housing and Urban Development (HUD) Manufactured Home Dispute Resolution Program is available to resolve disputes among manufacturers, retailers, or installers concerning defects in manufactured homes.” The dispute resolution program is a consumer protection that was part of the upgrades provided under the Manufactured Housing Improvement Act of 2000 (MHIA or sometimes referred to as the 2000 Reform Law). For more on consumer protections and retail consumer shopping tips, see the two video with additional text reports linked below, which were produced in conjunction with the “PissedConsumer.com” website and our MHLivingNews.com sister-site.

Quoting from their Part II, with the balance of the CBS 10 report found at this link here:

“The inspection found a total of 14 necessary repairs, including:

These are among the same issues the Holder’s pointed out to us when we met them in April, when Stephanie was near tears when she told us “we’re basically begging for help. None of this is our fault. We had nothing to do with the set-up. We paid people to do it. They were supposed to be qualified to do it.”

That would be sometime next week.

In the meantime, the Holder’s have filed a police report with CCPD alleging their signatures on the contract were forged.

“We did not sign off on those. Those are not our signatures. They wanted to get their money. They got their money, and we’re left with a mess,” Stephanie said.

CCPD confirms to the Troubleshooters they’ve begun an active investigation. ##

MHProNews contacted William C Boor “Bill”. President/CEO of Cavco Industries Inc (CVCO), who according to Bloomberg has been at his current position since “4/2019-PRESENT.”  Boor is not from the manufactured housing industry, who per that same sources was previously: “Chief Executive Officer at Great Lakes Brewing Company.” Cavco is the parent company to Palm Harbor Homes (PHH). Palm Harbor became part of Cavco, per their own website, in 2011. Boor came into his present position due to the fall-out from the drama created by the Securities and Exchange Commission (SEC) probe into Cavco and their prior president, CEO, and chairman, Joseph “Joe” Stegmayer and the companies alleged violations of SEC regulations.

Boor and another official with Cavco both declined commenting on the CBS 10 and other Cavco Industries related consumer complaints controversies that have come to the attention of MHProNews.

An informed source has told MHProNews the following via an emailed statement:

“Meanwhile on the Holders and Moore front:

1) PH [Palm Harbor] is on site today conducting work pursuant to the Texas deficiency report. That was quick. Doug sent me images. Busy bees over there.

2) Steven Moore is also having work done on his “La Belle” model less than 10 miles away as well apparently- also pursuant to Homer Zamoras report.

All of these things are good news.

The fight must continue however for the ones who don’t know help is out there.”

In addition to the points above, sources tell MHProNews that there are reasons to believe that the outreach by our publication to Cavco CEO Bill Boor and another Cavco executive may be playing a role in getting the Holders’ work addressed. That noted, the TDHCA deadline and other regional news have obviously been key factors in this unfolding drama which has now potentially turned into a criminal investigation.

As disclosures, MHProNews holds no position in Cavco or other tracked stocks that are part of our Daily Business News on MHProNews reporting on manufactured housing connected issues. That said, this writer for MHProNews’ personally knows several professionals at Cavco, including mid to higher level management positions. Based on input from others in the Cavco family of brands, some of what is occurring with the firm which has close ties to the Manufactured Housing Institute (MHI) are repulsive to them.  They believe in having happy customers but are often ‘stuck’ doing what upper management commands on a given situation like that of the Holders and several other consumers in and beyond Texas who have come to MHProNews’ and MHLivingNews’ attention.

Having provided Cavco’s leadership with several days to respond to this specific consumer complaints and related fraud/forgery charge alleged by the Holders, MHProNews and/or our sister-site will be providing coverage on developments as they are warranted.  Stay tuned.

To learn more about controversies related to Cavco, see the linked and related reports. ##