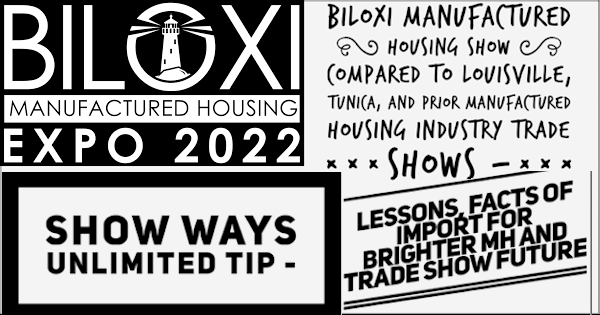 Before getting to the Biloxi Show and other manufactured housing trade shows, let’s note that the Recreational Vehicle (RV) and automotive industries have trade shows too. We’ll circle back to that too herein. Then note that as with your email or text inbox, there is a routine flow of messages that come into our inboxes too. One of those included the words, “Let your ‘Yes’ mean ‘Yes,’ and your ‘No’ mean ‘No.’ Anything more is from the Evil One.”  (Matthew 5:34-37). The timing of that is interesting, because it is Sunday as this is being written. For our steady stream of new readers and as a reminder to longer visitor-viewers on MHProNews, among the meanings to the word “masthead” is an editor’s column. Opinions are not Gospel. Opinions are a dime a dozen. By contrast, facts are what they are. On this Masthead, the editorial writer strives for objectivity about evidence, reason, morality, and reality. Another short segue may help before swinging back to the problems and opportunities that trade shows represents for the manufactured housing and other industries.

There are few things more painful than to inform someone of a loss significant loss or about apparent evidence that they have been (or are being) betrayed by someone trusted.

A common reaction to evidence of betrayal is denial by the betrayed.

That’s said for several reasons that will become clear.

Odds are good that if you are older than 20, you have already been betrayed in some sense several times.

For those who are not sadistic and have tried to break bad news to someone, you know that delivering bad news can be a thankless task. For such reasons, it’s common to want to avoid being the bearer of bad news. That said, let’s pivot back to trade shows in general, manufactured home shows such as Louisville, Tunica, Tulsa, and Kansas City, and the scheduled 2022 Biloxi Manufactured Housing Show specifically.

So, the historic Louisville Show – once an international event that drew mainstream media attention – was canceled for the first time in 2010. There was no pandemic. The decision was made that the industry’s business had declined so badly that having the show was too costly and risky. We can review what that decline, cancellation, and eventual comeback looked like later. But the backdrop is significant.

The Midwest Manufactured Housing Federation Board of Directors has made this difficult decision in order to ensure the safety of our exhibitors and attendees amidst the ongoing COVID-19 pandemic, as well as to accommodate our manufacturing and supplier partners working to meet unprecedented product demand.”

Anyone can make an allegation. Allegations can come from sources that are trustworthy as well as from those deemed unreliable. Even a good source can get something wrong. Even a liar can at times tell the truth. Sorting out truth from fibs or fiction is part of the journalistic and editorial endeavor. But everyone who deals with the public knows that discerning the truth is also part of day-to-day living.

That’s said because a source deemed reliable with long ties to Show Ways Unlimited informed MHProNews verbally that Clayton Homes was trying to kill off the industry’s manufactured home displaying trade events.  That source then ticked off some examples from the past, such as the North Carolina trade show, or more recently how Clayton attempted at significant cost a company trade show at Birmingham to allegedly rival and weaken the Tunica Show. When Clayton returned to Louisville, a source then told MHProNews that it was a “defensive” move on the part of that Berkshire Hathaway (BRK) owned brand.

Without documentation, that tip from the Show Ways source have to be carefully discerned based on various factors. Those factors include, but are not limited to, other possibly related evidence. Some might even wonder, why does it matter at all? Let’s see.

Live events, or in person contact, has its own advantages as well as costs. Zoom or other virtual communications can save travel time and mimic in person engagement. People and professionals have talked by phone for decades before smart phones or FaceTime existed. Before there was Zoom, there was GoToMeeting and other such platforms that allowed presentations and visual communications. Once novel, 3D hours of housing are now rather common.

Most of the above is demonstrably true, but some of that is plausible but unproven. Now, let’s pivot back toward the announcements about Biloxi.

This Masthead editorial column is part of a planned periodic look at those topics. Because some want the industry to grow and thrive. Others have long postured that desire but have not done the common-sense things that would actually make a difference to make sustainable, ethical industry growth possible.  More coming in the days ahead on Biloxi, manufactured housing, how it compares to other industry trade events, and beyond. Our industry should be soaring. Trade shows done properly could be a part of that. There is a case to be made that MHARR members should have their own trade event, that allows MHI members to come, but that is not beholden to MHI and/or MHI front groups. Stay tuned.