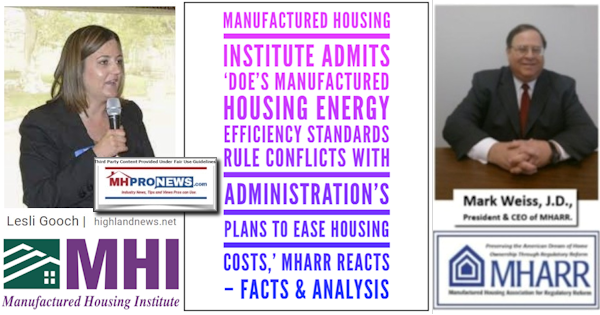 Mark Weiss, as a result of an emailed inquiry from MHProNews said the following. “The Fifth Circuit [Court], in staying the SCC [Social Costs of Carbon] injunction, stated, in part: “And because the claimed injury, increased regulatory burdens has yet to occur, the continued use of the Interim Estimates [i.e., SCC] will not harm the Plaintiff states until a regulation or agency action is promulgated from the actual use of the Interim Estimates” (Emphasis added).”

Weiss added, “Well, now we have a final regulation — the DOE manufactured housing energy standards rule — that uses the Interim Estimates as part of its justification. And because of that [SCC] standard, we will now have specific increased “regulatory burdens” which will increase homelessness and resulting costs that will be imposed on the states. So, as we have argued, the adoption of the DOE rule meets the court’s own test for actual injury and standing.” Restated, MHARR is making the argument that the 5th Circuit’s own ruling has set a standard that the DOE has met.

More importantly, MHARR’s visionary action weeks ago to engage with state attorneys general suing the Biden Administration over the SCC could prove to be critical. While any Supreme Court move is ‘a long shot,’ nevertheless the MHARR Amicus Brief, previously report by MHProNews at the link above, could prove to be critical for the industry to thwart the DOE’s damaging plan.

A periodic source connected with MHI provided the following to MHProNews, out of apparent concern for the ongoing ‘head fake’ by that group, which will be explained and explored further below. It will be followed by the parallel report by MHARR. Then, there will be a MHProNews Masthead additional information and commentary that will unpack these competing claims.

The Masthead on MHProNews will editorially note that MHI’s own ‘bragging’ that “more than 1,300 industry professionals have participated in MHI’s Call for Actions to the DOE about the rule” ironically proves how ineffective their effort is. MHI has demonstrated that they are posturing, because if it those 1300 emails were effective, then this latest MHI “housing alert” would have been unnecessary. For those with an objective analysis, MHI’s message is a laugh-out-loud example of self-contradictory thinking and rationalization.

That said, let’s pivot to the MHARR release on this same development.

Within two days of the Biden Administration’s widely-proclaimed announcement of various “administrative actions to ease the burden of housing costs,” the U.S. Department of Energy (DOE) has released the “pre-publication” version of a final rule for manufactured housing “energy conservation” standards (copy attached) that will drastically increase the cost of the nation’s most affordable housing and simultaneously exclude millions of Americans from the manufactured housing market and from homeownership altogether. Based on the 2021 version of the International Energy Conservation Code (IECC), the DOE final standard will discriminatorily subject HUD Code manufactured homes and the lower and moderate-income Americans who rely on them, to energy standards more stringent and more costly than those applied to million-dollar site-built homes.

The 362-page rule released today by DOE will apparently retain elements of the “tiered” structure initially outlined in the Department’s August 26, 2022 proposed rule, notwithstanding DOE’s stated intent, as set forth in its final April 2022 Environmental Impact Statement (EIS), to switch to an “untiered” approach as the “primary” scenario for the final rule. Industry members will recall that in a May 4, 2022 communication to DOE Secretary Jennifer Granholm, MHARR had vehemently objected to such a “bait and switch” tactic after the conclusion of any opportunity for public comment.

As published, the compliance date for the new standards will nominally be one year after the date of publication of the final rule in the Federal Register. This, along with multiple other aspects of the new rule, represents a direct rebuke of HUD’s Manufactured Housing Consensus Committee (MHCC), which had, among other things, recommended a much longer phase-in of the new standards over a five-year period.

Put simply, the publication of this discriminatory and unnecessary edict – which MHARR has opposed and has been fighting since day-one – should be a call to arms for the entire industry. As MHARR has consistently demonstrated, the direct cost impacts of this standard and its related regulatory and compliance-related costs, will drive millions of Americans out of the manufactured housing market and deprive them of the opportunity to achieve the American Dream of homeownership altogether. This despite the fact, again as demonstrated by MHARR, that manufactured housing energy operating costs are already lower than those for site-built homes left untouched by the 2021 IECC.

Most fundamentally, with the publication of the final energy standard, the industry finds itself at a cross-roads. While MHARR has attempted to get ahead of this issue by supporting a group of states in a court challenge to the use of the Social Cost of Carbon (SCC) metric in connection with this and other federal regulations, and while a favorable decision in that case could still potentially impact the DOE rule, the industry now faces a direct and arguably existential challenge. Put simply, a discriminatory imposition on the industry and its consumers, such as the final DOE rule, cannot stand and must not be allowed to take effect without a specific, focused, and concerted challenge. It will be up to the industry, therefore, to meet that challenge and, as necessary, pursue a two-track strategy of opposition to prevent the decimation of the manufactured housing market through such baseless and unnecessary regulation.

MHARR is in the process of reviewing the final pre-publication rule, and will address the rule and issues relating to its adoption and attempted imposition in the near future.

MHARR has provided a relevant 360+ page DOE document, which is found at this link here.

What MHI failed to acknowledge in their own messaging is the role that they have played in allowing the industry to face what they acknowledge is a serious threat.

The Texas Manufactured Housing Association (TMHA), an MHI ‘state affiliate,’ and the Texas Real Estate Center have said that manufactured housing are concerned about the risks and costs involved.

The Biden Administration has been deemed responsible for – or contributing to - a wave of shortages, including baby formula, other foods, domestic energy, and affordable housing.

It should be obvious. MHI needs to be engaged on the legal level to stop the DOE energy rule, supporting what MHARR has already led the charge on. But instead, MHI is posturing and posturing more. They have bragged about an arguably ludicrous new piece of legislation on this topic, with only a Republican sponsor, no Democratic co-sponsor. Step by step, MHI’s actions have revealed that they are not to be trusted. No one could possibly be so inept as MHI’s ‘leaders’ have been on this DOE and a range of other issues.  While MHARR would no doubt welcome authentic MHI involvement to stop the DOE energy rule, based on years of history, that happening would be a shock.

MHI can't have it both ways. If they are the industry leaders, then why have they failed to accomplish their own claimed goals? If MHI's leadership is so wise, then why have they failed to use the lawsuit option that MHARR has been urging on this DOE topic since 2021? If MHI is so pure, then why did MHI hand DOE what MHARR called a lifeline on the DOE rule? If MHI is so innocent and pro-manufactured housing independents, then why did documents emerge from a source at the DOE that ties MHI to prior subterfuges on this DOE rule issue in prior years? The known evidence mitigates against MHI's posturing.

There is arguably a need for legal action against MHI from among the trade group's own independent members, not just against DOE by growth-minded industry members.

As noted, MHI has been saying one thing, but doing another for years. That’s not just the view from the Masthead, it is the view of outsiders who have studied the behavior of MHI, such as Samuel “Sam” Strommen from Knudson Law. Strommen, laying out years of evidence and patterns of MHI behavior made the fact- and evidence-based argument that MHI should be stripped of Noerr protection and should be sued for apparent antitrust and RICO violations. Our industry should be looking to 2023 and the members of a new Congress to probe MHI and other aspects of manufactured housing that appear to be evidence of arguably corrupt and illegal behavior. See the related reports to learn more. 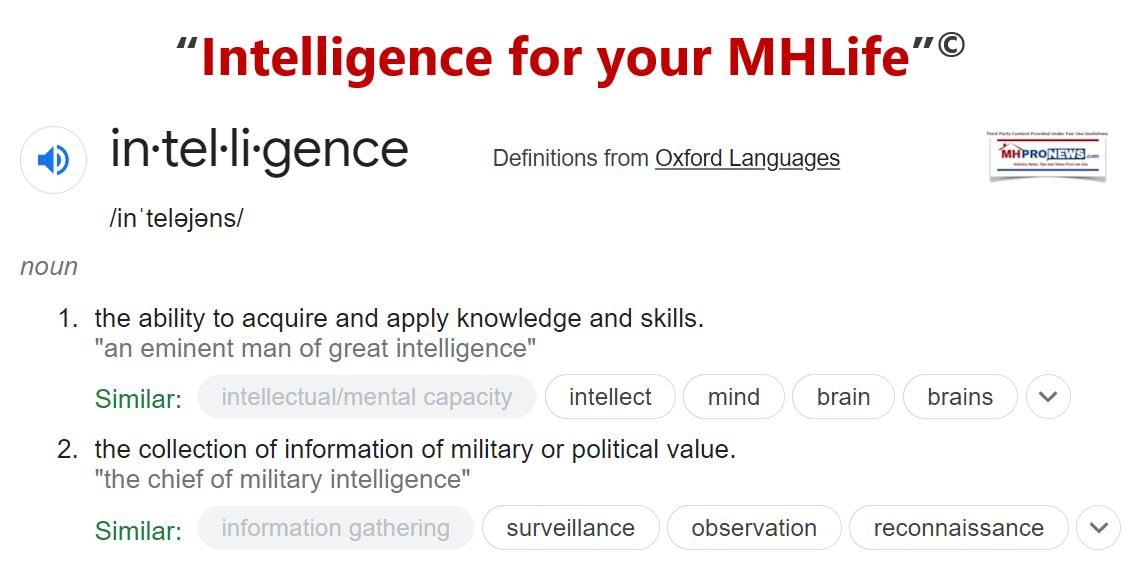