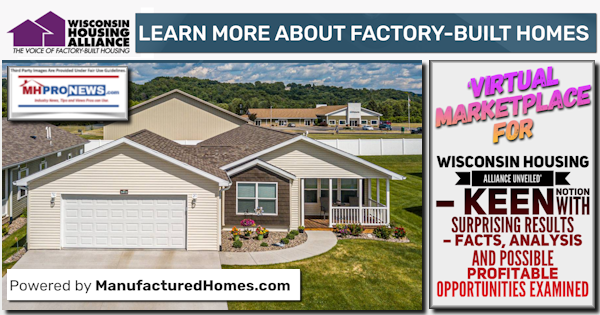 Cison and PRNewswire published the following press release for the Wisconsin Housing Alliance (WHA – https://HousingAlliance.us), a Manufactured Housing Institute (MH) affiliate on 5.17.2021. Almost 11 months have gone by, so there is sufficient data available to see how this fine sounding initiative which launched https://www.FactoryBuiltWisconsin.com has performed in the real world. There are potentially profitable lessons to be found for those who are willing to sift through the facts, claims, laws, or policies (and platitudes?) involved. First, this Masthead on MHProNews viewpoint will provide the WHA’s full press release, which appears to include blogging/marketing brand and MHI member ManufacturedHomes.com. Then this report, analysis, and commentary will then explore the significant potential for profitable lessons learned from the WHA initiative on https://www.FactoryBuiltWisconsin.com. Those insights will include thoughts from MHI member-advocate Darren Krolewski, MHVillage Co-President and Chief Business Development Officer who also oversees and launched MHInsider. Krolewski is also an official at pro-Manufactured Housing Institute (MHI) sister brand Datacomp. Tip – a common thread through this introduction includes three letters – MHI.

Its new website, www.factorybuiltwisconsin.com will allow people shopping for a home to learn more about Wisconsin manufactured and modular homes, view floorplans, get price quotes, find lenders and communities and even take 3-Dimensional tours of new homes available for sale.

“The virtual shopping showroom for homes is no longer some future pipe dream,” said Bliss. “For Wisconsin, it’s happening now.”

About The Wisconsin Housing Alliance

The Wisconsin Housing Alliance is a business trade group that represents manufacturers, retailers of and lenders for manufactured and modular homes in Wisconsin. It also represents community owners and operators.

The members of the Wisconsin Housing Alliance are dedicated to providing safe, affordable, high-performance homes to individuals and families in communities across Wisconsin. WHA supports its members with training, continuing education, and information — ensuring that the people who design, build, install, sell, and factory built homes have access to the best industry practices available. This site is powered by Manufacturedhomes.com.

1). Including their headline, date, source, and location, the above WHA press release is a scant 227 words.

2). The notion for what WHA executive director Amy Bliss described above as “The virtual shopping showroom for homes is no longer some future pipe dream. For Wisconsin, it’s happening now.” was pitched about a decade ago nationally by this writer in a plan to MHI affiliates in a GoToMeeting PowerPoint presentation. It clearly wasn’t accepted, which can be explored another time. But one point to note is that conceptually, MHProNews editorially supports good, authentic marketing online and offline.

3). Some facts to explore the above are in order. The bottom line for any marketing and advertising can be measured various ways, but certainly the most important metric is how many homes were actually sold before and after this plan was launched?

A precise number for that is not in hand, but a close stand in are the numbers of wholesale HUD Code manufactured homes shipped into Wisconsin. That data is shown below in the categories of single section and multiple section (so called ‘single-wide’ or ‘double-wide’ manufactured homes, as there hasn’t been what were commonly called mobile homes built in the U.S. since June 15, 1976). Note that the press release failed to mention the mistaken terminology ‘trailer house’ or ‘mobile home,’ which are arguably one of several obvious misses that will be noted further below. But next up are the data summarized by the Manufactured Housing Association for Regulatory Reform (MHARR) monthly which IBTS collects under contract for the U.S. Department of Housing and Urban Development (HUD).

What follows are the raw data for the categories. That will be analyzed based on internal and external additional insights that will be provided in this Masthead on MHProNews.

For calendar year 2020 (highlighting added), with totals at the bottom of each year shown.

For the first two months of data in calendar year 2022.

4). Based primarily upon internal data, meaning for the wholesale shipments of within Wisconsin of HUD Code manufactured homes, the official information for HUD indicates the following.

5). There are several other factoids that would be useful to know, but which can be generically grasped. Per MHI, some 31 percent of all HUD Code manufactured homes are being shipped into land-lease communities. While some of those are being sold, significant numbers of those are being leased, perhaps most notably by the public REITs and private consolidators of communities that are part of the group that dominate MHI board and thus MHI.

6) MHProNews previously reported that manufactured housing shipments went into decline in the last quarter of 2018 after MHI launched its so-called new class of manufactured homes which they later rebranded as CrossModTM homes. It wasn’t until the post-COVID19 pandemic was declared and a national tidal press for more single family housing occurred that conventional builders simply could not meet the demand that manufactured housing production/shipments finally reversed back toward modest growth.

7) MHProNews will not – at this time – note all that is missing from the WHA and ManufacturedHomes.com “powered” site is lacking. In fairness, the site is eye appealing. But it clearly has not resonated with the home buying public in anything like a sustained, much less robust, way. Why not?

a). Here is where admissions from MHVillage’s Krolewski, fellow (and some say, “notorious”) MHI member Frank Rolfe, and others that include the ‘newly announced’ community-focused trade organization come into focus.

b). Even if the new trade group ends up a bigger dud than NAMHCO, both sent an arguably important message. MHI is not getting the job done in the post-production side of the industry. On the production side, MHARR’s efforts contrasted with that of MHI on the DOE energy issue makes it plain that the industry’s independents would be better off without MHI than with it.

8) This Masthead will weigh in at about 1800 words, shorter than numbers of our reports in recent years, but routinely longer than what MHInsider or ManufacturedHomes.com publish as blog posts or ‘articles.’  But try to find a single article written by MHInsider or ManfuacturedHomes.com that critiques MHI. Try to find a single post written by them that clearly lays out the facts and evidence that explains why the industry is struggling after the enactment of the Manufactured Housing Improvement Act (MHIA) of 2000 or the Housing and Economic Recovery Act (HERA) of 2008. The MHIA gave manufactured housing so-called “enhanced preemption.” But the lack of enforcement of federal preemption, which once more among trade media has been all but ignored save by MHProNews and our MHLivingNews sister site, is one of the real underlying causes for the lack of sales and thus production or shipments of new homes. The other factors are financing, which like zoning/placement are post-production issues.

Another factor is image. Despite another occasional blogger, but dependable MHI cheerleader is Suzanne Felber, who managed to reveal once again MHI’s failure to address the image issue in a meaningful fashion.

The bottom line could be summed up like this. Not unlike the Florida Manufactured Housing Association’s (FMHA) BowStern effort, this effort by WHA and ManfuacturedHomes.com is a dud as measured by retail market effectiveness.

What this writer said in the quote below in 2018 (as well as before and since) has demonstrably been proven true. Pretty pictures, sharp videos, or 3D tours are obviously not what is lacking in manufactured housing. There is a lot of negative news that is routinely generated by MHI and/or MHI state affiliate members that some of their own customers, mainstream media and some politicos have labeled as “predatory.” Because MHI has clearly not enforced its own fig leaf of a “Code of Ethical Conduct,” there ought to be a new post-production trade group that has good resident/customer relations. That group should paint a bright line distinction from so-called “proud” MHI members that are apparently predatory. Properly structured, just being a member of such a post-production trade group would be the only ‘award’ needed.

As matters stand, several of MHI’s members are not only predatory, but are arguably in violation of federal and/or state antitrust and RICO laws. Warren Buffett said it well. You can’t make a good deal with a bad person. Nor can you make a good deal with a bad or flawed organization. Whatever MHI used to be in the 20th century, MHI stopped being in the 21st century sometime after the dawn of the Berkshire era.

We may be politically incorrect from time to time on MHProNews, but will always aim to tell the truth like it is based on the evidence and commonsense reflection. Much more could be said, but in 10 minutes or so (for the typical reader, less) of reading, the facts, evidence and expert analysis provided in this MHProNews Masthead speak loudly enough. ## 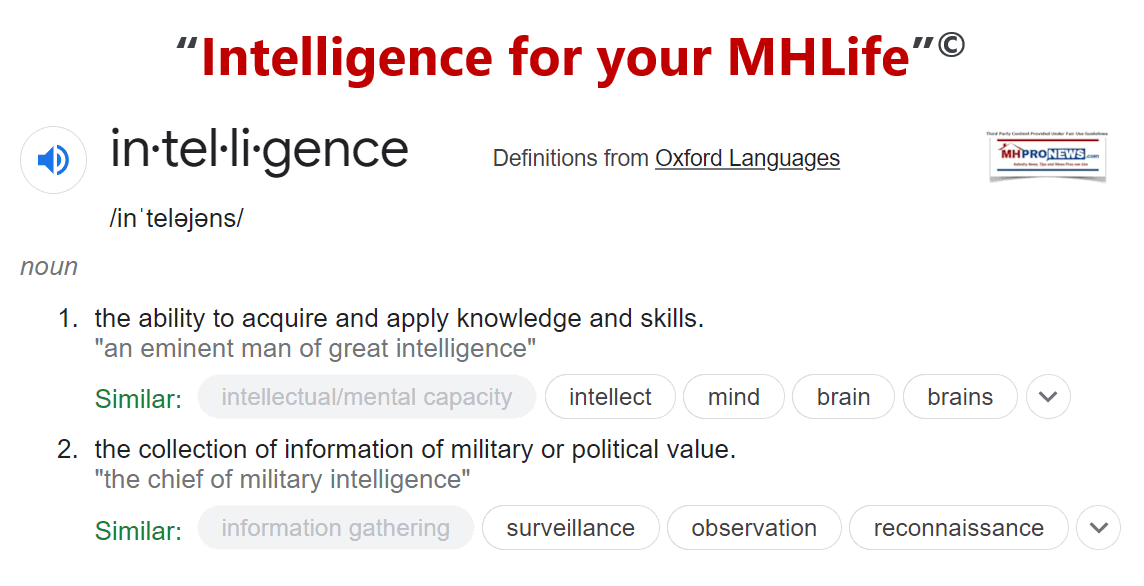