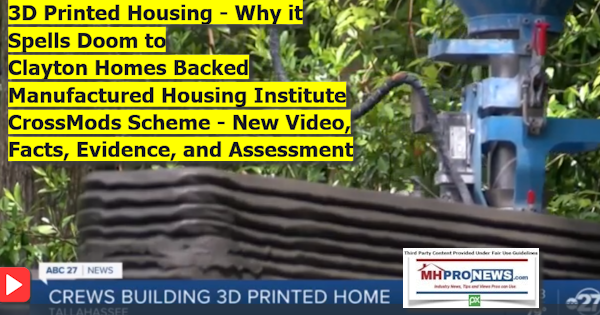 On July 20, 2021 WTXL ABC 27 in Tallahassee, Florida showcased “something pretty cool happening on Clay Street” in Griffin Heights. Their videos states that one of reportedly three 3D printed houses currently being produced in the U.S. at this time is being installed there.

Printed Farms’ Fredrik Wannius said that this may be the future of much of residential and even commercial construction. “Each week, each month new improvements are coming,” said Wannius. The 3D printing machine is reportedly between ½ to ¾ of a million dollars. The 3D printer reportedly lays down about 2 feet of wall daily.

Others have reported such 3D printed housing equipment that can make the walls of a more modest size 3D printed homes in a day.  The printed structures  can then be completed with interior or exterior fixtures in fairly short order. These structures are normally built with poured concrete. They are thus very durable.

That noted, back in Tallahassee, “It is certified affordable housing, so we will be reaching out with our non profits in the area that help families locate those homes,” said Kyndra Light.

Light operates Precision Building and Renovating LLC with her husband. She said that Light that their goal is to be about twenty five percent (25%) cheaper than conventional on-site construction.  She thinks that goal is about 12 to 24 months out.

MHProNews and our MHLivingNews sister site have been monitoring and reporting on developments in alternative lower-cost production methods for building for years. At this time, 3D printed housing is poised to be potentially the least expensive option out there.

That’s a fair and timely question. That inquiry was ironically, albeit obliquely, answered in the Tierra Grande report Dr. Harold Hunt, Ph.D. at the Texas A&M Real Estate Center. Hunt’s Q&A with Dustin Arp and other pro-CrossModTM housing manufactured home professionals is presented in the report and analysis linked above. For thinkers and those in it for the long haul, it is worth the read. The short version for those in a rush? Arp thinks that they can come in at about 8 to 10 percent under conventional housing with CrossMods.

Notice. This stunning factual disparity and its implications does not mean that ‘mainstream’ HUD Code manufactured homes are doomed.  It does mean that the handwriting is already on the wall for CrossMods.

The vexing reality is that CrossMods were doomed to crash and burn since before its sorry and apparently failed inception.

Sorry? Failed? The ironies and the arguably treacherous and/or stupid – take your pick – rationale for CrossModTM homes has not existed from its announced start. Again, the evidence is found in the Tierra Grande report with MHProNews analysis linked here and above.

But it is not just 3D printing of housing that doomed CrossMods.  There have been years of reports by MHProNews/MHLivingNews that have laid out the evidence of various challengers to manufactured homes that appear to be affordable housing. Palletized homes – see the report linked below – is just one of those HUD Code manufactured home rivals. Other tiny houses, such as container, ADUs, or other units fall into that bucket of HUD Code home challengers.

The reason there has been an apparent press for decades for an alternative to proven manufactured housing is evidently and arguably because the industry’s self-proclaimed umbrella and post-production trade group, the Manufactured Housing Institute (MHI) has failed to properly promote the virtues and value of modern manufactured homes. As but one more twist of ironic fate, MHI’s own so-called research for CrossMods demonstrated just how poor a job they have done in promoting manufactured homes.

For instance. Instead of MHI aggressively debunking each and every negative attacks on manufactured housing – as Tim Williams himself said – by apparently intelligent, but nevertheless misinformed if not misguided or agenda driven souls, the hiding in plain sight failures of MHI and its dominating brands comes into sharper focus.

Additionally, it should be obvious that MHI is either massively inept at doing what they claim, OR the various claims and evidence that they are corruptly working to consolidate the industry into a few insider hands are true. See the deeper dive into that topic linked below.

There is a special report on MHProNews planned for Monday, 7.26.2021 that will be linked here.

Then, there is an upcoming special Cutting Edge that will be linked here. We modestly suggest that the wise should not miss either of them.

There are always the possibility of genuine miracles. That said, it seems unlikely that the Almighty is going to swoop in and save CrossMods.

So, the bottom line is this. For months, the data and the sources have said there is no traction to CrossMods. Now, the CrossMods killer – 3D Printed Housing is looming.

The manufactured home industry’s pros need to realize that MHI’s claims have been illusory, malicious, or some combination of factors that routinely appear to magically benefits consolidators that are MHI members. Meanwhile, those same ‘efforts’ by MHI equally mysteriously seem to work to the disadvantage of manufactured housing independents.

The truth is hiding in plain sight. If MHI and its big boy backers could disprove that claim, they would have embarrassed MHProNews relentlessly and/or sued us out of existence. But instead, what has MHI’s so-called leader done? They have ducked and run – sometimes literally – for cover, time after time. The documentation – including photos – for that claim is found below.

Once the Masthead and MHProNews grasped the troubling reality that MHI has become a tool for consolidators, we have not had any reason to deviate from the evidence for that claim.

Speaking without forked tongue has made and kept us the documented, runaway number one largest and most read in our profession. We aim to stay that way.  MHProNews plans to do so by doing what media is supposed to do. Namely, continue to hold the powerful and manipulative to account. To do so by telling it like the facts and evidence makes clear that it is. That is why our tag line remains as important now as when we rolled it out. Manufactured home “Industry News, Tips, and Views Pros Can Use.” © Our ongoing thanks to our sponsors and sources that make this ongoing pro-industry, pro-consumer effort possible. ##

Notice to MHI members. Follow up emails to several MHI linked attorneys – not one disputed the claim by the law firm cited in the report below. MHI has demonstrably created an ‘amen corner,’ an echo chamber that parrots their talking points. MHI and those involved have not denied that evidence-based allegation.

But as, or perhaps more important, is this below.  For those MHI members who are aware of what is occurring, but who fail to stand up or speak up in some form or fashion, legal experts cited below say that it could make those members vulnerable to legal action, just as MHI is. To learn more, see the related report linked below.