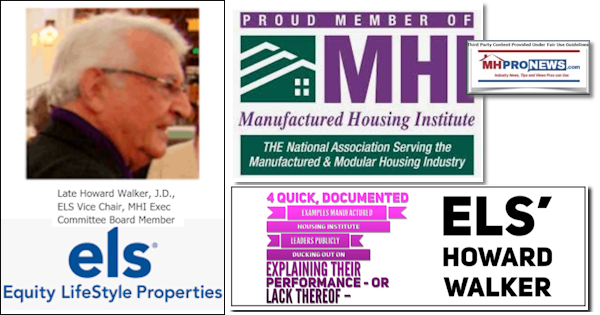 This under 700 word Masthead rapidly sets the table for an in-depth report linked below. That linked report carefully unpacks fresh evidence and prior facts about Manufactured Housing Institute (MHI) performance that includes MHI statements, their members, leaders, and other sources.

For newcomers and longer-term MHProNews readers, it’s useful to recall this history of MHI’s response – or lack thereof – in the past 4 years of engaging industry members on their performance.

In no specific order of importance are four examples plus the take of the late ELS Vice Chairman and longtime MHI board member, Howard Walker, J.D. While four are mentioned, there are others.

#1) In 2017 MHI’s then communications Vice President Patti Boerger was invited to be part of a panel discussion in Tunica, MS. Boerger/MHI declined. 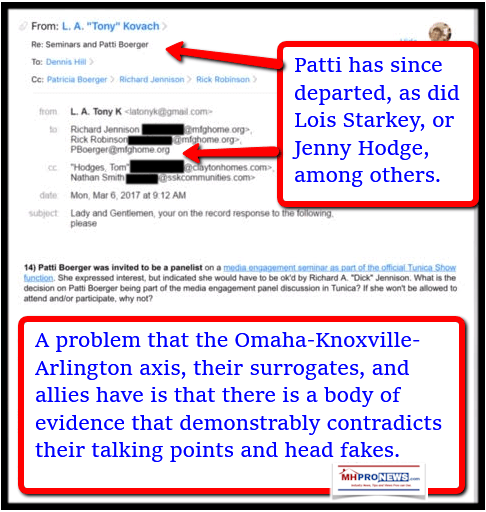 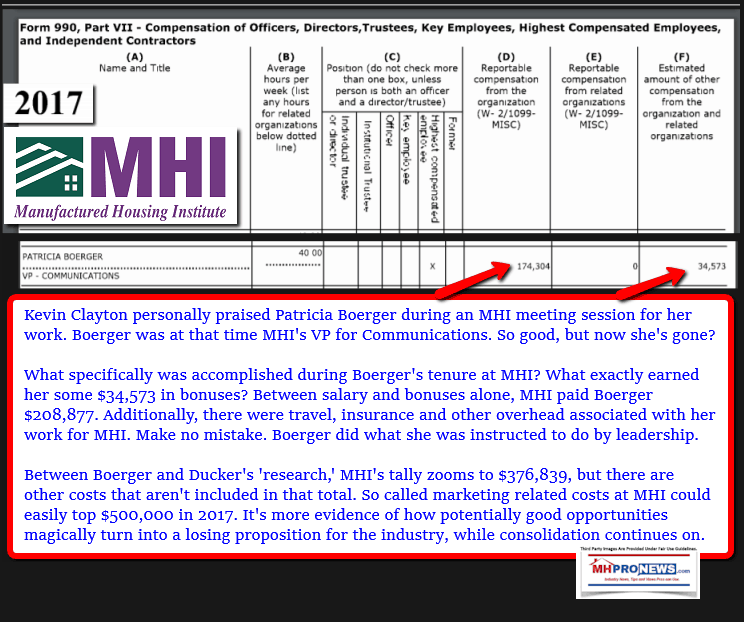 That Tunica panel discussion moved ahead. Current MHI member Frank Rolfe critiqued MHI for failing to engage the media. Note that then MHI chairman Tim Williams/21st Mortgage had said such media engagement would be part of Boerger’s role.

#2) Wednesday 8 A.M. 1.17.2018 at the Louisville Show. Then MHI President and CEO Richard A. “Dick” Jennison canceled his own presentation to manufactured home industry members. Why? Perhaps because shortly before his planned address, MHProNews emailed out a list of 12 questions for industry members to ask Jennison during his Q&A. Jennison was spotted on the show floor by the Clayton Homes display. He was talking on his cell during the time he could have been speaking. 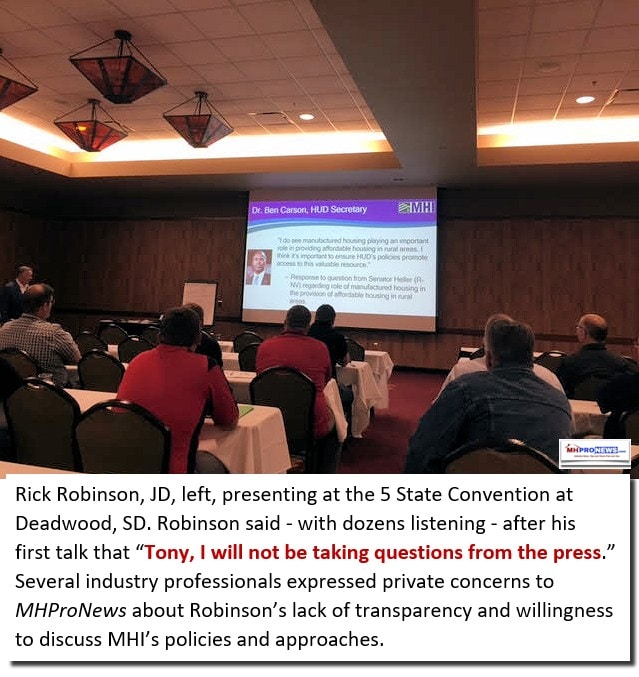 #4) 2021. Following the publication of Knudson Law’s Samuel “Sam” Strommen’s allegations against Berkshire Hathaway, Clayton Homes, their affiliated lenders, MHI and some of their key brands, MHLivingNews reached out to provide an opportunity to deny, deflect, or otherwise attempt to explain away documented facts, evidence, and claims against them.

Numbers of other examples over the years where provided to MHI, Berkshire, their inside and outside counsels, and others to defend their 21st century track record.

In previous years, MHI routinely commented. But following their formal break with this publication after a series of questions and vexing revelations, they’ve since routinely declined. Why?

Those roughly 700 words should stand as a reminder of what the late Howard Walker, J.D. said about transparency and engagement on even troubling issues.

The above and Walker’s words sets the stage for the in-depth report linked below which unpacks MHI’s claims vs. the facts, evidence, and historic track record.

For years, some of those same voices previously praised MHProNews for our objective, pro-industry growth and pro-consumer coverage.

Grab your favorite beverage and snack. Digest and ponder about twenty-five minutes of facts- and evidence-based highlights and lowlights of why MHI is ducking out on publicly discussing or debating their association’s performance.

A lagniappe to this new ground-breaking report is this reminder.  Directly and indirectly, several MHI members have publicly blasted MHI for their lack of media engagement — which differs from their pledges. That paradoxically includes Berkshire/MHI’s own leaders.

They can attempt to hide.

They can try what the Capital Research Center calls in their periodic series “Deception and Misdirection.”

But the facts are what they are. Once revealed, they cannot hide from the evidence of their own words measured against their own performance. 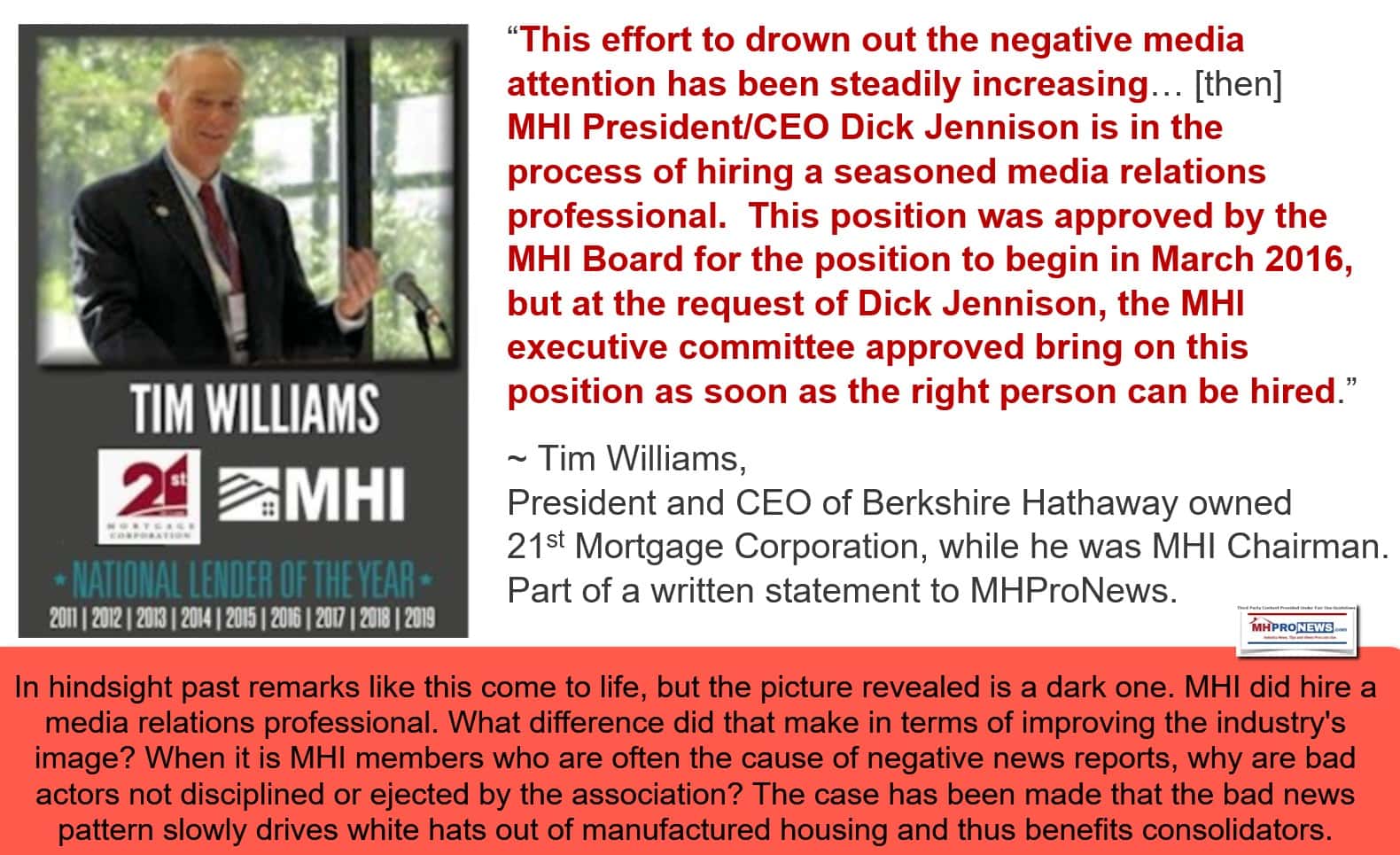 Howard, when will MHI’s brains face their own music, words, and documented track record?

“We Provide, You Decide.” © here at your home for authentic manufactured home “Industry News, Tips, and Views Pros Can Use.” © ## 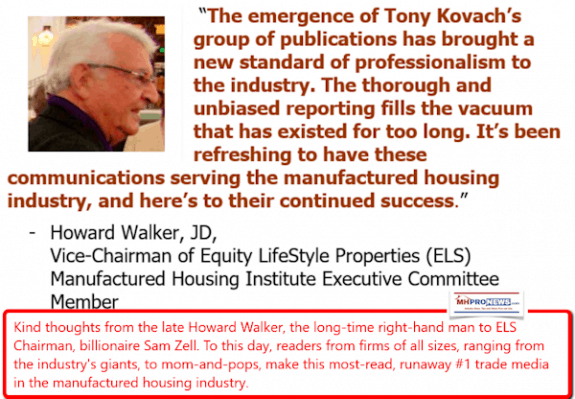