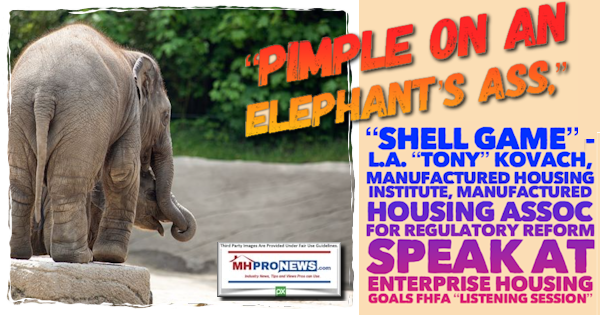 FHFA hosted a virtual listening session today with various nonprofits and interested parties in the Enterprise Housing Goals (EHG) for Fannie Mae and Freddie Mac. The link here has the previously filed comments by the Manufactured Housing Institute (MHI) CEO Lesli Gooch. This link also has today’s comments as prepared and the related press release by Mark Weiss, J.D., president and CEO of the Manufactured Housing Association for Regulatory Reform. It was MHARR’s Weiss that used the term “shell game” as part of his address. What follows below are the comments as prepared by L. A. “Tony” Kovach in his capacity as a multi-decade manufactured home industry consultant, professional, and expert. 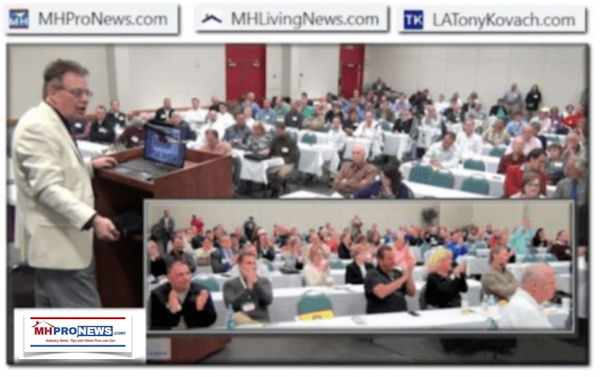 “A Pimple on an Elephant’s Ass.”

That’s how a Manufactured Housing Executives Council (MHEC) member described to MHProNews the comparative losses on manufactured homes to losses incurred in conventional housing during the 2008 housing-financial crisis. He compared those trillions in losses on houses to the far more modest losses experienced by lenders operating in HUD Code Manufactured Homes in the late 1990s into the early 2000s.

Despite that comparative pimple, Fannie Mae, Freddie Mac, and others periodically point back to that problematic so-called “GreenSeco era.” That’s 2 decades in the rearview mirror. How can that be an excuse for treating manufactured homes so differently than conventional housing in access to lending?

Before and after passage of the Housing and Economic Recovery Act (HERA) of 2008 and the Congressional mandate of Duty to Serve (or DTS) for manufactured housing by Fannie Mae, Freddie Mac – FHFA and other regulators have paid lip service to supporting manufactured homes.

That negatively impacts millions. Who says?

Schmitz and those researchers argued that collusion between HUD and builders is a case of “sabotage monopoly.”

They said that sabotaging collusion between HUD and builders increased homelessness, harmed minorities, and cut off the lower income class of all backgrounds from the benefits of affordable manufactured home ownership.

Schmitz and his colleagues wrote positively about the manufactured home option.

What makes Schmitz and his colleagues’ charge of HUD’s role in “sabotage monopoly” more compelling are comments from Bill Matchneer. Attorney Matchneer is the former HUD administrator for the Office of Manufactured Housing Programs (OMHP).

Matchneer said HUD’s Office of General Counsel consistently failed to enforce the enhanced preemption clause made law when the Manufactured Housing Improvement Act of 2000 (MHIA or 2000 Reform law) was enacted.

Jim Gray, formerly with the FHFA Duty to Serve program, said in his exit message that FHFA and GSEs – “[W]e have not made as much progress [toward meeting the Duty to Serve mandates] as many of us would have liked; so much remains to be done to reach these [DTS] markets.”

In December 2019, I made two different listening session presentations on the DTS mandates; one virtual and another live in Washington, D.C.

In both presentations, I made the evidence-based case how disgraceful it was that the FHFA and GSEs have ignored the law to the harm of millions.

Several scheduled to present today are aware of the issues I’m raising. Because some worked for HUD, FHFA, GSEs, or are otherwise connected to the manufactured housing industry.

For instance. Lesli Gooch, Ph.D., with the Manufactured Housing Institute (MHI) made statements in her filed EHG comments letter that sound supportive of manufactured homes.

But upon closer examination, Ms. Gooch focused on an unproven plan that Berkshire Hathaway (BRK) owned Clayton Homes – which supports MHI – in their push for their branded CrossModTM homes scheme.

Where was Gooch’s similarly robust support for all other mainstream manufactured homes?

Supposedly there have been double-digit sales nationally of CrossModTM – under whatever name – in the last few years. That’s in a market producing some 95,000 HUD Code manufactured homes annually.

Attorney and manufactured home finance veteran Marty Lavin – an MHI award winner – did consulting for Fannie Mae. Lavin told MHLivingNews that MHAdvantage ® was likely to be as successful as MH Select®.

David Dworkin, CEO of the National Housing Conference in federal comments said that manufactured housing was necessary for affordable housing.

Dworkin was fully confident that the GSEs could successful do manufactured home loans.

Dworkin previously worked for a GSE as a Vice President.

Edward Golding worked for HUD and the FHA.

In 2018, Golding and 3 colleagues did a post for the Urban Institute. It was a entitled “Manufactured homes could ease the affordable housing crisis. So why are so few being made?”

What that Urban Institute post didn’t disclose on that specific page is that Berkshire chairman Warren Buffett is a lifetime trustee of the Urban Institute.

The applied logic of Golding, Dworkin, MHARR’s Mark Weiss, and others should make it plain that the GSEs could and should be doing robust lending in manufactured housing.

Oxford Bank has made personal property loans on manufactured homes for some 2 decades. Oxford reportedly loans with credit scores that mirror those of Berkshire owned 21st Mortgage.

Oxford purportedly does so profitably and sustainably and at lower interest rates than 21st.

Given those facts and legal mandates, what possible excuse can FHFA and the GSEs give for not robustly making mainstream manufactured home loans for both personal property as well as mortgage lending?

I am consultant L.A. “Tony” Kovach. I’ve worked in the insurance, RV, trade show, and other professions. But all told, I have some 30 years’ experience in manufactured housing retail, communities, with financial service firms, and builders of HUD Code manufactured homes.

Keep in mind that I was an MHI member for years. I was elected by my peers to sit on the MHI Suppliers Division board.

For a time, I was arguably fooled by the purported paltering and posturing of the MHI flim-flam that has undermined manufactured housing.

That paltering pattern harms millions of Americans while thousands of independent retailers, producers, and others went out of business or sold out at discount.

Applying the “Iron Triangle” notion and Schmitz’s “Sabotage Monopoly” principles suggest that insiders rigged the market in ways that undermine the interests of various competitors.

I encourage all to Google each of these topics yourself!

Strommen’s report called what is happening in manufactured housing a case of “Felony” antitrust violations with possible RICO aspects involved.

Strommen has no axe to grind in our profession.

Strommen concluded that manufactured housing was being subverted from within and mentioned Clayton, MHI, other MHI members, plus the Buffett “castle and moat” method too.

Given the degrees, evidence, and experiences of those involved, I have a hard time making the argument for incompetence causing the status quo.

“He who passively accepts evil is as much involved in it as he who helps to perpetrate it. He who accepts evil without protesting against it is really cooperating with it.”

Those good laws need to be fully and properly implemented to restore the free market and liberate millions who want affordable home ownership made possible by mainstream manufactured homes. Pax et bonum.

As a disclosure, part way through this presentation – apparently some time after the David Dworkin comments shown above – this speaker was cut off. That was after several ‘technical’ issue that made it difficult to get on at the scheduled time.

Update 3.27.2021: The FHFA has stated in writing that they will be posting the above comments. That and more are found in the report linked below.

It remains to be seen if FHFA will will post the comments from this so called “listening session” where at least one official apparently did not want to listen. That arguably only confirms what Mark Weiss said, namely, that this is a “shell game.” It also underscores the points made above.

It will be interested to see if what was said before the apparently deliberate cut off will include what I did say in their audio recording.  Note that FHFA staff have confirmed via email in writing that they have the comments as drafted and that they are ‘reviewing’ them.

Once more for emphasis. This purported ‘cut off’ of my remarks only begs the question, how serious is this “listening session” process? Or is this legally mandated support for manufactured housing, as we and others have alleged, just a sham process designed to keep manufatured housing from getting actual meaningful DTS or Enterprise Housing Goal support?

See the linked and related materials, above and further below.