It can manifest itself in several ways, including, but not limited to:

the use of incorrect terminology,
hyping the negative in reports on manufactured homes,
to inexplicably giving ‘more love’ to tiny houses – which in many cases, truly are ‘trailer houses’ – than they do to the arguably superior value of federally preemptive HUD code manufactured homes.

But as trade media – a subset of news media – we’re not bashing those in the mainstream media.  Because frankly, there’s a level of responsibility on both sides of the ongoing controversy over media and the manufactured home industry.

On the left-and-right of media bias – which research ranging from progressives in Harvard, to conservatives at Newsbusters admit exits – there are reasons why manufactured housing isn’t the only ones that suffer or complain.

From progressive Harvard to conservative Newsbusters, researchers across the left-right divide believe that the tilt of media bias is real. If it exists in political and economic issues, why would we be surprised if it exists on housing related topics, including manufactured homes? 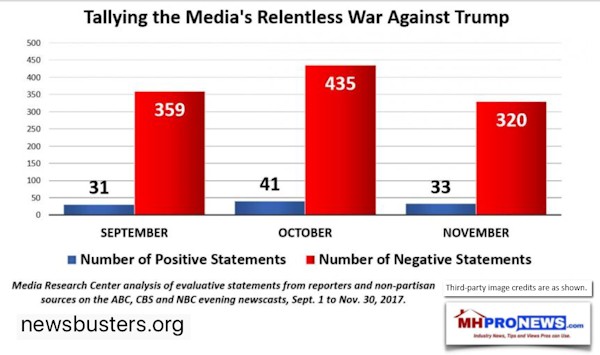 A few years ago, in the pre-Richard “Dick” Jennison era, this writer did a well-received presentation for the Manufactured Housing Institute (MHI) at their Congress and Expo on the need for and methods of proper mainstream media engagement.

There are Fundamentally Only Two Choices, Engage or Not Engage with News Media

As the post below indicates, there are two and only two fundamental choices.  You engage with media when a news item comes up, or you don’t.

Frank Rolfe made a simple but important point in this under one-minute video below.  When industry professionals fail to engage, it looks like there’s something to hide, and then there is no chance for a balanced story.

Others have sounded off on the media engagement topic, including those examples shown below.

But the reality that the industry can get good media coverage is demonstrated by Paul Bradley, and ROC USA, on a routine basis.  If they can get positive media, why not others?

Manufactured Housing – Helping Those Most In Need

MHI award winner, Marty Lavin has called the overall coverage by the press of manufactured housing as the industry’s “other image campaign.”  While there have been exceptions, MHI’s primary response has been ersatz engagement, via advertorials, rather than direct engagement.  A careful look at the issue reveals how correct Lavin is, because the ratio of negative stories to positive ones is quite imbalanced.

So, when there is such a widespread agreement that media tends to get it wrong on manufactured housing, why are there so few willing to engage on the issue, when it strikes their local market?

This writer has mentioned to audiences and clients on previous occasions that when approached properly, local or regional media often want to get it right. They also often, but not always, want to avoid getting the facts wrong.

So facts, not just opinions or emotions, are important to the mainstream media professional.

Among the experiences shared at the seminar that Ann Parman and others at MHI praised was a true story about a meeting with two professionals with a regional magazine.  Some days after the requested fact-to-face meeting, they published an article that created one cringe-worthy use of the T-word, but through the rest of the article, absolutely glowed about manufactured homes.

The cost?  Only the time, and effort.

That wasn’t a one off, it has been repeated in several markets over the years.

Most MH industry people who engage the media do so on what can be seen as a very shallow level of self-interest. They understandably want to promote themselves, and not much more.  But media professionals shy away from plugs.  That, they’ll tell you, is the roll of advertising.

But it is precisely education – genuine information, not hype or spin – that moves not only media, but also consumers.

Part of the value of MHProNews holding both industry members and others to account for good business ethics is that is that when the Daily Business News does a critique of media, or industry professionals, or anyone else, who have crossed a line, its more credible – because we have a history of balance.

1)     Odds are something like 4 to 17 percent of their viewers/readers live in a mobile or manufactured home, depending on the state or market. The nationwide average is about 7 percent.

2)     There is an affordable housing crisis, and its getting worse.

While housing becomes more and more expensive across the United States, there’s a simple solution. For those who either want to be frugal and still get great quality or those who have limited funds, but desire to be a homeowner – the answer, suggests and HousingWire – could be modern manufactured homes.

3)     The ethics guidelines of the Society of Professional Journalists call on them to give accurate, an unbiased coverage.

4)     It isn’t just the president and his defenders that think there is media bias. Even Pope Francis has weighed in on the topic, and plans to do so more in the days ahead, as an ethical issue.

It should be noted again that MHProNews and MHLivingNews both track and report on stories across the left-right media divide.  There are good, bad and “meh” reporting on a wide range of issues across the media divide.

It is partially the responsibility of manufactured home pros to engage the media routinely enough in their own market to reverse the multi-decade trend of poor or inaccurate reports.  You can do that yourself or you can hire a professional – including one of the most experienced in the industry – this organization.

Who says? Ask Ann Parman or those who’ve praised our work in the media engagement field. ## (News, analysis, and commentary.)

New Year’s Resolution: This writer already has one of the largest LinkedIn followings in the manufactured home industry. But we’ve frankly not asked for Twitter, or Facebook followers.  That changes, starting today. If you want to keep up with posts relevant to the industry, you can connect via the links below.

Note 1: Thousands do it. You, your team, and industry colleagues can sign up to the MH Industry leading headline news/updates – typically sent twice weekly – please click here to sign up in just seconds.

Note 2: For media, business development, training, or other professional services, click here.  The more pros like you that use our services over any others, the more we can protect, educate, and promote the Manufactured Housing Revolution.