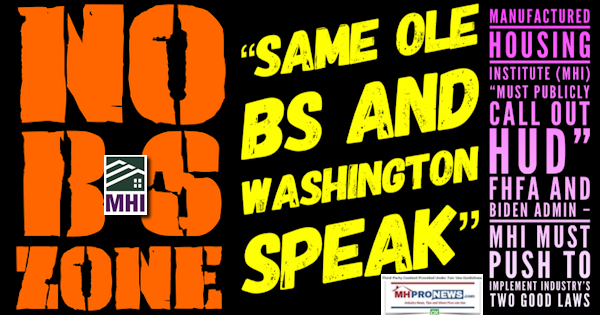 In a call and email from a frustrated Manufactured Housing Executives Committee (MHEC) voice on 9.2.2021 is the following to MHProNews. These remarks are in response to the various Biden White House, HUD, and FHFA statements that are found in detail at the link below.

“These are the same ole bullsh-t and Washington-speak [talking points] that MHI [Manufactured Housing Institute] has been feeding the industry, and actually getting away with it, since Chris Steinbert left MHI. There is nothing new here.”

“For example. [Trump Administration HUD Secretary] Dr. [Ben] Carson said and actually DID more [to promote the manufactured home industry] than this [MHI] crowd has with these sort of sweet talk [emails]. And yet there has been no results produced by MHI during the current or two prior administrations.”

“What MHI must do is AGGRESSIVELY ADVANCE AND IMPLEMENT THE INDUSTRY’S TWO LAWS, THUS BRINGING ABOUT PERMANENT RESOLUTION TO THE INDUSTRY’S CONTINUING ZONING AND FINANCE NIGHTMARES.”

The source did not specifically say so, but that is precisely what MHProNews noted in the detailed report linked below. HUD’s current Secretary Marcia Fudge effectively said the same thing. This circular scenario will not change until MHI steps up to do their job and forces the change. As Fudge said in the video with transcript posted in the report below, “Until we start to address this we are going to continue to be perpetually in this kind of situation.”

The MHEC executive something similar in the following part of that professional’s emailed comments.

“MHI continues to go around with its hat in its hands begging for help from the same people who DO NOT TAKE ANY STEP TO FULLY AND PROPERLY IMPLEMENT ITS TWO LAWS, WHICH WOULD THEN FORCE THE SAME PEOPLE TO INCLUDE MH IN THESE PROGRAMS…it is as simple as that.”

“The rest is all MHI’s razzle dazzle, bullsh-t and mendacity to fool the innocent, trusting and hardworking small to medium size independent members of this industry.”

That source has accused MHI thereby of harming millions of consumers who are otherwise trapped in rental housing.  MHI’s behavior and years of posturing is purportedly on behalf of Clayton Homes, their related financing, and their allies at MHI.  The result? By the thousands or one by one, this pattern has undermined many and could eventually wipe out the remaining independents in our profession. Those claims happen to be supported by the detailed factual and evidence based report linked below.

The “two good [federal] laws” that the MHEC source was referring to are:

On paper, MHI, several of the state associations, and the Manufactured Housing Association for Regulatory Reform (MHARR) all seemingly support DTS for personal property (home only, or “chattel” loans) as well as enhanced preemption to overcome local zoning and placement.

But tragically, in practice, MHI is posturing vs. doing. Who says? Samuel Strommen, Doug Ryan, Danny Ghorbani, Mark Weiss, and numbers of others who have made similar comments on the record. Paradoxically, MHI and their leaders have also contradicted themselves in ways that support the concerns voiced by others as reports like those linked reveal in great detail.

Following the email to MHProNews which was sent from a private account, so that it can not be traced via that association, that MHEC source called to say that there is no practical way for federally regulated manufactured homes to go city by city, town by town, and county by county to fight local zoning battles. That was the purpose of passing the MHIA and its enhanced preemption clause in the first place.

As noted, MHEC, MHI, and MHARR statements on the record have said similarly. But what is frustrating to the industry’s remaining ‘white hat’ voices that care about robust growth that could house millions of Americans is that the federal laws needed  to overcome this vexing and avoidable pattern already exist.

While MHI postures, the industry is being steadily consolidated by MHI’s largest members with the deepest pockets. Will MHI finally act? If not, will they be held to account by federal regulators for deceptive practices which are consolidating the industry?

Because on that point, Fudge, that MHEC members and others who are correct.  Until that pattern is broken and MHI does the job it claims to do, nothing good is likely to change. See MHI’s own statements in the report linked above and herein to see the factual evidence and patterns to learn more.  Because as Jim Ayotte ironically stated it, this is not rocket science. Enforce existing laws. Enforce existing laws. ##