From 2010 until 2018, there’s been an ongoing series of governmental, media, and other investigations into the post Haitian tragedy that involved Kevin Clayton, Bill and Hillary Clinton, Warren Buffett’s led Berkshire Hathaway conglomerate which owns Clayton Homes. This Daily Business News report will update and review what was promised, and what took place.

The allegations are that billions of dollars were wasted and failed to go to those that needed and were promised post-disaster relief.  This is a useful book-end to the Poverty Inc video, which documented, step-by-step how many poverty and disaster relief programs benefit a few, but fails or makes worse the conditions of those they’re intended to help.  That report, is linked below.

Acclaimed Poverty Inc. Video, MHVille – Why Left & Right Should Listen, Learn From Each Other

Recall that a devastating earthquake hit Haiti in 2010. The first video is from a local media interview with Clayton Homes, and makes an eye-opening point. “Just after the earthquake in Haiti, Clayton Homes contacted The Clinton Foundation…” posted on August 24, 2010.

It all sounds great.

But what actually happened?

Ben Swann’s Reality Check produced what appears to be one of the most compressive and balanced video overview – loaded with facts, visuals and graphics – on the topic so far.  It was produced earlier this year. It frames the issue of Clayton, Berkshire, the Clintons, et al by looking at this question, “If Haiti Is a “S***hole” Country, Who Is Really to Blame?”

It’s powerful.  The video above is loaded with details like graphic in the still below.

Don’t miss a minute of this eye-opening exposé.

U.S. and Canadian reports connected to this next video interview, shown below, are the ones that used the phrase “toxic trailers,” quoted in our headline, above.

That this scandal didn’t end is underscored by the CNN video, shown below, which said last year that federal investigators are looking into related issues.

Federal Investigation of the Clinton Foundation and Related Scandals

Pro-Clinton and pro-Democratic CNN produced this next video report last year, that spotlighted that federal authorities are actively investigating allegations of corruption related to the Clinton Foundation. 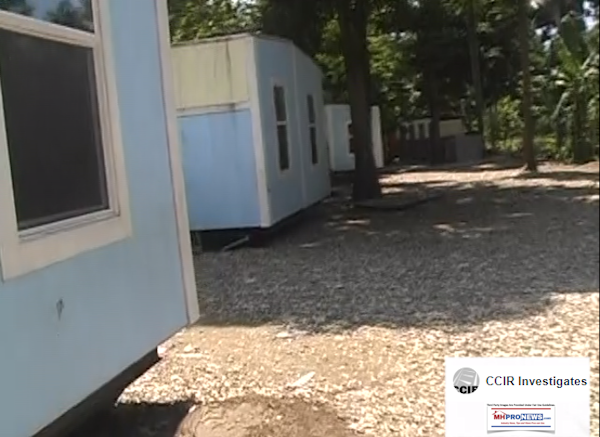 This video by CCIR, and gives some additional inside and outside views of this problematic issue.

You can feel the outrage, years after the 2010 disaster, in this video interview with an elected Haitian leader that the Clinton’s allegedly tried to buy off before the 2016 election.

“Honesty is a very expensive gift. Do not expect it from cheap people,” said Warren Buffett as one of his quotes related to protection of reputation.

Marty Lavin has said, “Pay more attention to what people do than what they say.”  Buffett preaches against making headlines for questionable business reasons, and yet Wells Fargo and even more often, Clayton Homes, has been involved in scandals and allegations that have resulted in legal, regulatory actions – alone with negative publicity.

Buffett actively supported Clinton and Democrats in the 2016 election cycle.  While he’s been quieter since Donald Trump won the presidency in 2016, is there any reason to think he’s working for anyone other than those with his long ties to candidates like Secretary Hillary Clinton, or former President Barack Obama?

In this next video, Judicial Watch’s Tom Fitton is talking about the Clinton Foundation, and their ongoing investigation into the allegations of misuse of funds connected with the Haitian disaster relief.

There are more video reports like these, but these provide the most comprehensive review of what the various sources have said.

So, don’t think that a period of quiet in the mainstream means that these scandals, which often yield negative headlines for the industry, are over.  There are indictors that more black-eye headlines are ahead.

There are several indications that the issues could be heating back up.  Stay tuned, because who else in MHVille’s trade media bring you reports about conglomerates like Berkshire Hathaway – other than this source?  “We Provide, You Decide.” © ## (News, analysis, and commentary.)

Warren Buffett Would be Okay With Clayton Homes Losing Money, Says Kevin Clayton – But Why?