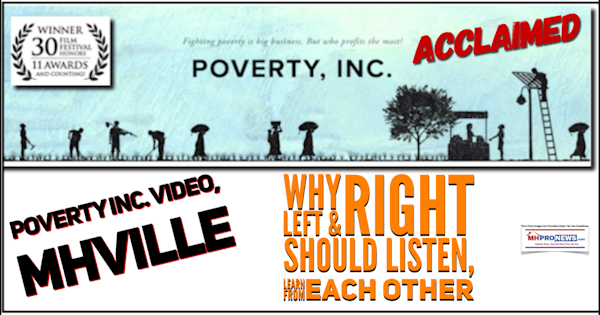 “Having a heart for the poor isn’t hard.
Having a mind for the poor, that’s the challenge.”

“You cannot start an economy when ownership is in question.”

Affordable housing and an opportunity society – properly understood – are non-partisan issues. The problem with many of the divisions in the U.S. today are rooted in mutual misunderstandings and reflexive distrust.

Robust discussions are needed and useful, but they should be based upon facts and evidence.

Whatever position on the left-center-right divide you find yourself, with an open mind, surprising discoveries can occur that span the gap, and which could benefit millions of Americans in ways that virtually all but a few could celebrate.  The alternative? More of the same.

The much lauded, award-winning Poverty, Inc video may not seem at-a-glance to have much connection to your everyday life.  But actually, what’s described in this powerful documentary has a parallels here in the U.S. Further, it’s your tax money or charitable giving going for programs that have failed to produce the desired results for decades.

Let’s note there are many reasons why the Daily Business News on MHProNews has for years used information from various sides of the left-right media divide.  First, no one group has a claim on the facts. Facts can be agreed upon. Once the facts are understood, then practical solutions based upon facts can be advanced.

One could argue a variety of solutions based upon the full-length Poverty, Inc. video. But what the video demonstrates is that poverty – aid programs – are a de facto businesses that have made a few wealthy, and actually harm the very people they are supposed to help.  That’s why the opening quote above is powerfully on point, “Having a heart for the poor isn’t hard.  Having a mind for the poor, that’s the challenge.” – Poverty, Inc.

But that same pattern is true here in the U.S.A.  The programs designed to help people actually trap them in poverty. It’s what MHProNews has been periodically spotlighting about subsidized housing, or other so-called “Great Society” programs. These are subsidized challenges to market-driven solutions, which include manufactured homes.

Among the solutions that the Poverty, Inc. video de facto advances are that local jobs, local businesses need to be created, and through work, people can lift themselves up out of poverty. It isn’t free stuff that helps, rather, it’s giving people the dignity of work, and the ability to care for themselves and their own families.

The Rule of Law and Property Rights

In this clip above from the full-length feature documentary Poverty, Inc., Muhammad Yunus, Hernando De Soto, and Herman Chinery-Hesse examine the importance of Rule of Law and Property Rights in development.

Some pull quotes from the clip above:

–      “It is broken and not right that a kid would grow up without parents.”

–      “I don’t want to come across as critical of those who wanted to help,” but “There is a better way to help.” They are not desolate, they have hope. “There’s a way to fix it.”

Other Pull Quotes and Factoids from the Full Length Poverty Inc, on Netflix

One of the statements was that they are not against humanitarian aid.

–      “Of course, when a disaster happens, we should rally and help each other. But it shouldn’t become a way of life.”  If the aid groups are still there 3 years after a disaster, like the one in Haiti, then something has gone wrong. 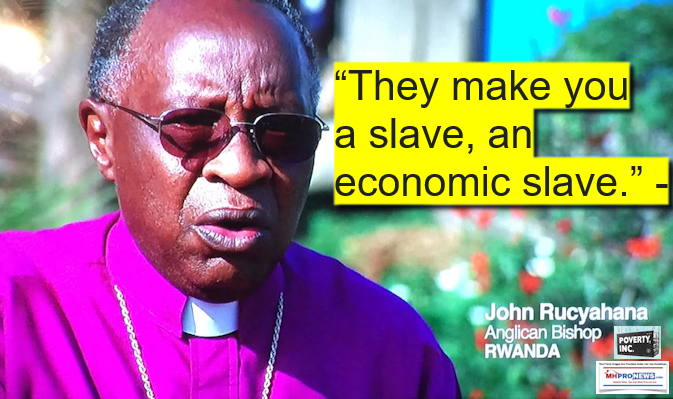 The statements on points made in Poverty, Inc. often parallel comments shared by the Rev. Donald Tye Jr. with MHProNews, as well as numerous prior reports we’ve published.

Tye said that U.S. poverty programs, however well intentioned, create permeant jobs in government and charities that depend on continuing poverty. That parallels comments in Poverty, Inc.

Tye spoke against the “warehousing of people” in public housing, advocating instead for the broad application of enhanced preemption, and providing opportunities for home ownership of affordable manufactured homes.

Former President Jimmy Carter recently made comments about housing programs, saying Democrats needed to make this a midterm-campaign issue. That will be looked at in a separate, planned report.  But the programs that the Great Society created have failed to move the needle on poverty, which was declining under free enterprise.  As more than one speaker on Poverty Inc pointedly explained, there is not enough money to give away to raise people out of poverty, but there are enough opportunities for people to raise themselves out of poverty by giving them the dignity of work, and the opportunity for ownership.

There are some in the GOP that tend towards hand-out programs, that were championed by Democratic President Lyndon Banes Johnson (LJB) and the so-called “Great Society.”  But those programs have failed, while adding some $22 trillion in costs by 2014, per the Heritage Foundation.

Its logically absurd to vote for those who are trapping people in poverty through handouts and ‘socialistic’ programs.  “They make you an economic slave,” said the Anglican bishop in the quote above.

“Having a heart for the poor isn’t hard. Having a mind for the poor, that’s the challenge.” –      Poverty, Inc. Keep these insights from Poverty Inc in mind, see the related reports, and share them as the midterms approach.

That’s “News through the lens of manufactured homes, and factory-built housing,” © where “We Provide, You Decide.” © ## (News, analysis, and commentary.)

“Thou Shall Not Steal,” $2 Trillion Annually Lost to Lack of Affordable Homes, Making the Manufactured Home Case