CNBC’s and Morgan Stanley observations are interesting, but we’ll briefly lay out why there are likely 50 percent wrong.  With the biggest single day rise since the spring of 2018, the CNBC/Morgan Stanley and related will be this evening’s market focus, found further below.

Other than moat-minder investors, most like bulk of the policy results so far under President Donald J. Trump.   Per left-of-center CNBC, here are their bullets, followed by graphics from Morgan Stanley, and then followed by other third-party data that will give those who want a red wave to carry both the House and the Senate to take heart.

Per Morgan Stanley: note we believe that option two is the more likely one, and that the odds are higher than they suggest. 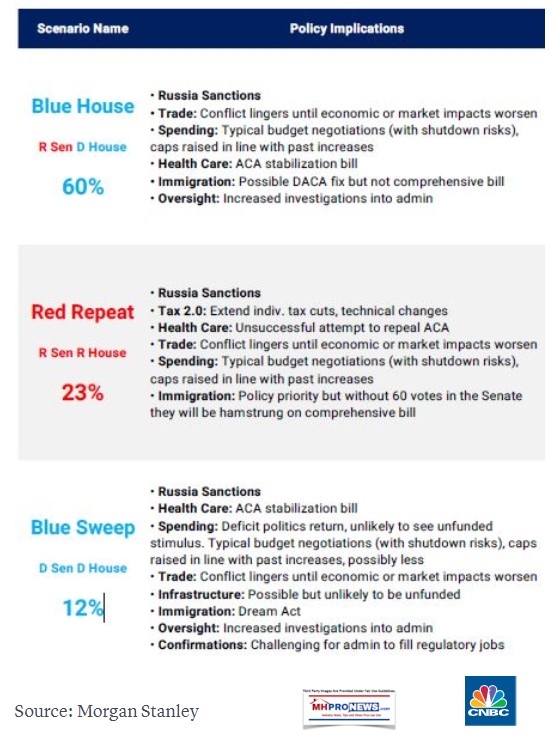 No one knows it all, and our crystal ball is imperfect. That said, we were correct in 2016, when others were saying ‘no chance.’  Some of the same kinds of indicators that led MHProNews to project an insurgent Trump win for the White House in 2016, and allowed the GOP to hold a narrow grasp of the House and the Senate are reasons why a Red Tide is more likely than not.

While noting it all comes down to people going to the polls – that means you too – let’s recap some evidence as to why the Dems may be disappointed on midterm election night 2018, just three weeks from now.

2)    Rasmussen, which was one of the more accurate polls in 2016 has President Trump hovering around 50 to 52 percent job approval.

3)    While the Washington Post disagrees, Rasmussen says that POTUS Trump is now at 36 percent approval among African-Americans.

4)    Consider that the BBC reminds us that in 2016, Donald J. Trump won “8% of black voters – 88% voted for Clinton.” That was 8 percent in 2016 was enough for Candidate Trump to make states like North Carolina tilt red. Even if it is less than 36 percent, as WaPo suggests, if minorities and Anglos turn out and vote in equal proportions, expect a red tide, not a blue wave.

5)    Gallup surprisingly showed in September that approval of the GOP is at a multiple year high.

The strong drum beat from the anti-Trump wing of the media reveals concern, not confidence. There’s more but that’s enough for this evening.

With the Kanye West effect, and a growing number of non-traditional support growing for the 45th President and the GOP that has provided the strong economy in decades, it is difficult to see how rational voters will vote against their own self interests.