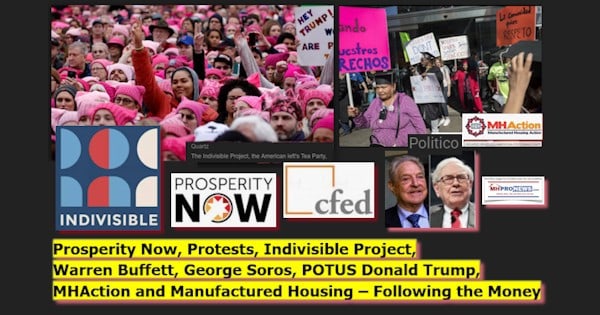 Prosperity Now. MHAction. Indivisible Project. Billionaires George Soros and Warren Buffett. Each of those are all interconnected. Each of those are involved in protests against manufactured home businesses, President Donald J. Trump, and his supporters.

Let’s follow the facts, evidence, and the money trail.

1)    The billionaire George Soros funded “…Open Society funds are only a small percentage of Tides‘ total…” budget, says the Tide Foundation’s own website.  It’s in a post by Tides on their own website entitled “Why does the right hate Soros?”

2)    As MHProNews and MHLivingNews have previously reported, the Tides Foundation also has major funding via other foundations by Warren Buffett.

Buffett, as focused manufactured home industry pros and observers know, is Chairman of Berkshire Hathaway, which owns giant Clayton Homes, Vanderbilt Mortgage and Finance, 21st Mortgage, Shaw Carpeting, and other firms that are in or supply housing and factory-builders. Berkshire is widely seen as the dominating force behind the Manufactured Housing Institute (MHI). Thousands of industry professionals were no doubt surprised that Buffett’s money flowed through Tides to anti-manufactured home community protesters, MHAction.

ICYMI, or want to refresh your mind, see two of those reports documenting ties between Tides, Buffett and MHAction, see the above and below.

We believe in giving credit where it is due, whenever possible.

Tim Williams, the prior MHI Chairman, and the 21st Mortgage Corp president and CEO, mentioned something a couple of years ago in a conversation with me that will connect to this picture.  We’ll spotlight that tie-in to this follow-the-facts, evidence and money report in the days ahead.

But my hunch is that when he reads this – and our sources say that he will – Tim just may recall what we’re teasing as the next shoe to drop for the MH Berkshire brands, MHI, et al.

Tim, thanks again.  In hindsight, that was a very insightful conversation.  Thank God for the gift of memory, right?

While some can’t be roused by anything, for others that report will be an earthquake for many in MHVille. We hope to have it in time for Thanksgiving. If you aren’t yet on our email list, you can sign up at the link shown on the banner.

Moving on now to the balance of the headline topic.

Influence Watch is one of several organizations that track the often befuddling trail between various non-profits, foundations, and deep pockets like billionaires Buffett and Soros. Here’s what their research reveals.

“The Indivisible Project (or Indivisible) is a left-of-center 501(c)(4) tax-exempt organization headquartered in Washington, D.C., and created in late 2016 as a response to the election of President Donald Trump. The Indivisible Project was established to provide liberals a practical guide about “Resisting the Trump Agenda.” [1] Despite connections to elite donors, Indivisible claims to be a grassroots movement. The organization was founded by two left-wing activists with congressional experience and ties to the left-of-center economic policy advocacy group Prosperity Now.[2] According to a spokesperson within the organization, Indivisible’s goal for 2018 is to replace all elected officials who don’t reflect their views with “diverse, progressive, local leaders.”[3] [4] Indivisible claims to represent over 5,800 groups and has a website that has been viewed over 18 million times.[5]”

I can almost hear the sweat rolling off a few foreheads in Knoxville, Arlington, and Washington, D.C. based Prosperity Now. Some industry friends and colleagues of mine should also take notice of this too, because they know where these dot-connections are leading.

Here’s what they say about funding.

Of Indivisible’s 2017 revenue, 35 percent was raised through small dollar donations, and 65 percent was received through major gifts and foundation grants. [11] Of the $7.5 million raised, $3.4 million was spent on organization expenses,” according to Influence Watch.

“Established by left-wing activists Ezra Levin and Leah Greenberg in December 2016, Indivisible was originally organized as a movement along the lines of the conservative Tea Party opposition to President Barack Obama’s administration. [6] To that end, Levin and Greenberg’s first project was a 26-page political organizing manual entitled “A Practical Guide for Resisting the Trump Agenda.” The manual highlighted the best methods to “beat back” President Trump and defeat the new conservative majority in Congress.[7]Since that original document was distributed, the movement has evolved into an effort to disrupt civil discourse and “sustain a powerful progressive movement.”[8]

Keep in mind that Prosperity Now is pro-manufactured housing, progressive operation, but is also favorable to issues like rent-control and has taken other problematic positions.  Prosperity Now used to be known as CFED. More on them in the days ahead.

Now, with the above in mind, you see:

With the above in mind, circle back to that video of Kevin Clayton in Smoking Gun 3.  Recall how Kevin was virtually gushing in that video about Clayton working with foundations and nonprofits?

Is the bigger picture coming into focus?

Now, keep in mind that companies associated with MHI, including but not limited to, Clayton and Cavco, are under various kinds of federal investigations.

News of Cavco’s SEC woes just broke this week.  But MHProNews has been reporting for some years about Clayton-Berkshire related federal investigations. Certainly, people are innocent in the eyes of the law until proven guilty.  That said, when there is smoke, is there a fire?

The manufactured housing industry has been gamed by a rigged system for years.  Our industry once had hundreds of manufacturers, and literally tens of thousands of independent retailers. Some of those vanished due to natural events.  But others have arguably fallen due to unjust manipulation of regulatory, capital, political and other forces.

It is now becoming clear that protesters are just part of a broader plan. We’re political independents, and we strongly assert that most of the Democrats or MHI members that we personally know are fine people.  But they have often been mislead into believing certain things harmful to their interests.  A decade ago, the same could be said about swaths of the GOP too.

President of the United States (POTUS) Donald J. Trump is disrupting the rigged system.  That’s why elites in both major parties opposed him tooth and nail.  He is arguably taking the Republican Party, and turning it into a small-to-midsized business, white and blue collar workers party. He’s taken elements from both major parties, and is blending it into something new.

That’s a threat to everything that billionaires who control the Democratic party stand for, because the rigged system has purportedly made them billions of dollars. That’s why the invest so heavily in it.

We’re all for bipartisanship, and working with people of all backgrounds. But that starts with facts and evidence. If you or anyone you know can find any factual errors in the above, by all means, let us know.

Or if you have your own tips and stories to share, you can contact us via the link above, or my contact information below.  See the related reports, with one more to be posted late today, further below. That’s “Industry News, Tips and Views Pros Can Use,” © where “We Provide, You Decide.” © ## (News, Commentary, analysis. – Notice, the right to share this unedited, with a link back and proper credit, is hereby granted). 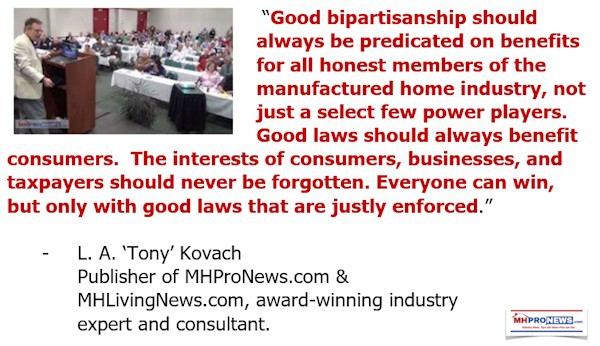