“I’ll just cut to the chase: Big Tech’s out to get conservatives…” – that pull quote is from the right-of-center Wall Street Journal on July 30, 2020.

“Tech billionaires are plotting sweeping, secret plans to boost Joe Biden,” said left-of-center – meaning Democratic-leaning –Vox, which added on May 27, 2020 “Inside the experiments, data wars, and partisan news sites that Silicon Valley thinks can help Biden catch up to Trump.”

Vox went on to say “In Silicon Valley’s new political moment, four billionaires in particular — LinkedIn founder Reid Hoffman, Facebook co-founder Dustin Moskovitz, philanthropist Laurene Powell Jobs, and former Google CEO Eric Schmidt — have the most ambitious plans, according to Recode’s interviews with over 20 donors and operatives. The chess moves of this power set are instrumental to fulfilling Democrats’ — and much of Silicon Valley’s — four-year quest to oust Donald Trump. And yet each of these billionaires is moving their pieces with varying levels of secrecy, and often with minimal disclosure, scrutiny, or accountability.”

That brief survey makes it clear that it is not just Republicans that are saying that Democrats have become the party of billionaires, big business, big banking, and big tech. A range of source – numbers of which like NPR, Vox, or the Washington Post tilt Democratic in their left-of-center media bias – are saying that the financial powers behind the Democratic Party are billionaires and their big business interests.

That flies in the face of the old claim that the Republicans are the party of the rich.

Yet some politicos continue to repeat that canard of the Republicans being the party of the wealthy, despite the growing evidence that it is the Democratic Party that seems to dominate in financial matters. Recall this graphic from the 2018 election cycle? 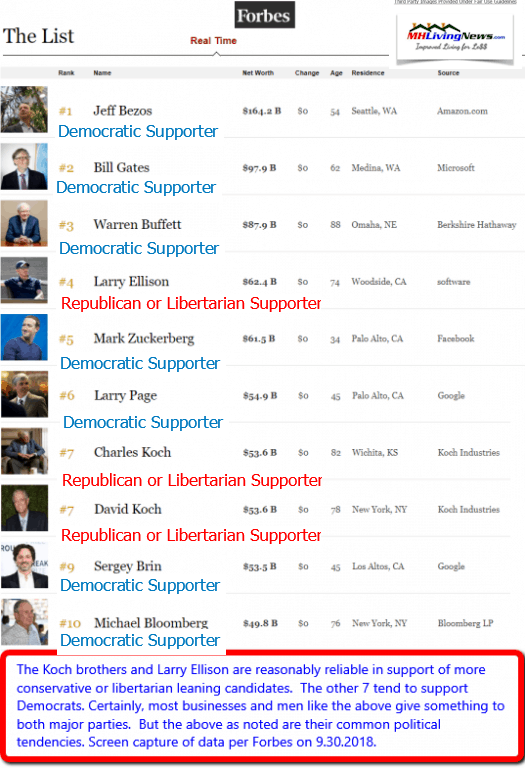 To be sure, there are and have been, billionaire backers of both major parties. The graphic above illustrates that point. But it also makes clear that the Democrats have the advantage.

But the fusion between Democrats, billionaires, their respective business, media, and nonprofit interests is getting harder to deny. As Vox framed it. “While Democratic megadonors on Wall Street tend to route their donations to the party, tech billionaires like to claim they are offering more than just a check — and they want to be more in control.”

“We’re already putting data into the hands of Democrats and progressives on the front lines of this critical election cycle,” said Luis Miranda, an Alloy spokesperson, per Vox. “We’re proud of our work, and we’re just getting started.” Alloy at that time had $18 million in funding from LinkedIn founder Reid Hoffman. More cash was available, and that was just one of several such operations named.

To look at both sides of this issue, among the advantages of the Trump-Pence GOP ticket include their pre-COVID-19 track record and the power of incumbency. Team Trump also had an advantage on the digital-data side. Certainly, enthusiasm from their base is tangible. There is still a claim that the Trump-Pence Campaign has the advantage in the ‘ground game’ of door knocking. President Donald J. Trump’s tens of millions of Twitter followers are legendary.

But with Twitter and Facebook demonstrating their willingness to censor even President Trump, some of the advantage that the White House and the GOP had is in part neutralized. These are issues that go back for several years of complaints and concerns by conservatives, with some Democrats admitting it is an issue too.

The howls in recent years that “the Creepy Line” at Google and with others in big tech has landed in the Democrats corner.  There are bi-partisan state level antitrust actions aimed at Google and Facebook, and similar federal probes. But that seems to be too late to stop their ability to impact how millions consume media, reporting, other politically connected topics.

Rephrased, leaders and the public must be made aware of the threat posed by the powers that be that right-of-center Breitbart sarcastically calls “The Masters of the Universe.”

What the billionaires, their media, business, nonprofits, and other interests have done is take over the Democratic Party. That is arguably part of the various billionaire “oligarchs” and their respective moats. 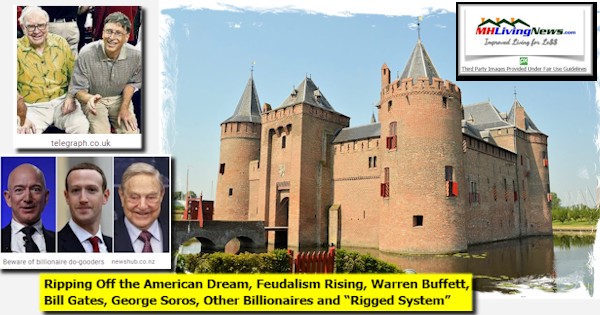 See an analysis of the above at this link here.

Because when issues are carefully examined, there is the common ground for consensus on numerous topics. But presently, those topics are routinely weaponized against President Trump and his GOP allies in and running for Congress.

To shed light on these developments, some points are useful to understand. Among them is the meaning of Warren Buffett and his partner Charlie Munger in their Berkshire Hathaway conglomerate about the notion of the castle, moat, and durable competitive advantages.

Quotes on the Castle, Moat, and Durable Competitive Advantages

“The most important thing [is] trying to find a business with a wide and long-lasting moat around it … protecting a terrific economic castle with an honest lord in charge of the castle,” Warren Buffett said, per CNBC on May 7, 2018.

“I think the record shows the advantage of a peculiar mind-set – not seeking action for its own sake, but instead combining extreme patience with extreme decisiveness,” said Charlie Munger, per Risk a Little for a Lot. That same site added, that Munger said “Most people are too fretful, they worry too much. Success means being very patient, but aggressive when it’s time.” 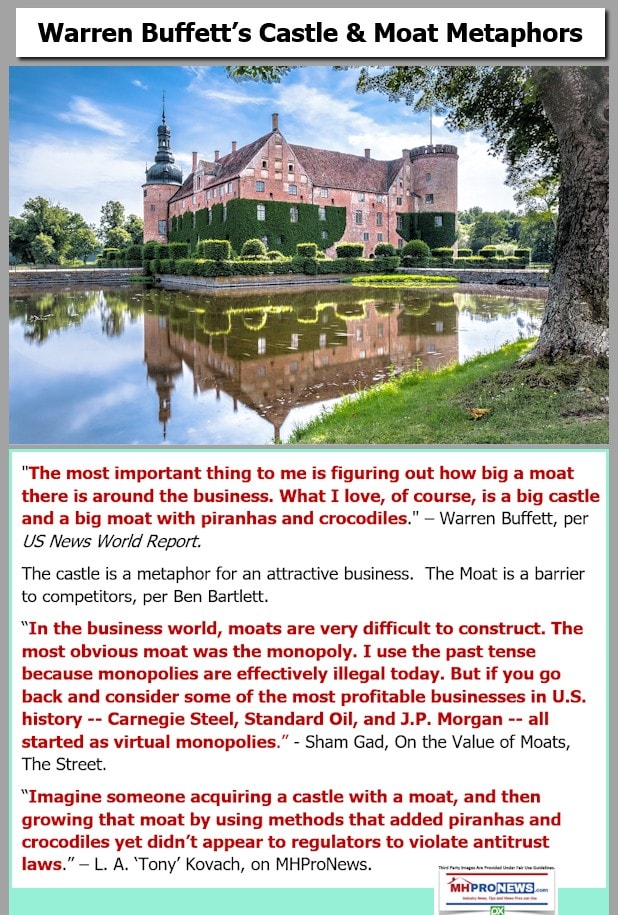 There are thousands of websites with quotes by Buffett and Munger on the moat, castle, and his strategies to defend that castle and moat combination. Among the more revealing quotes are these.

While this relates directly to business, as the other quotes and linked information reflect, what some may not see is how this “castle and moat” methodologies are playing out in the political sphere.

During the Clinton Administration,
Democratic Governor Jerry Brown made these statements. 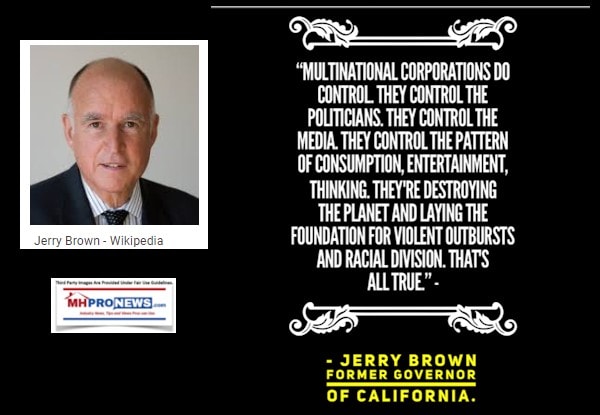 Even though Buffett and some of his peers posture the virtue of candor, there are several observers from across the left-right divide who have noted that Buffett’s metaphors are at times insightful but on other occasions they are mere head-fakes. The Capital Research Center, which broke the research expose on Arabella Advisors and the role that billionaires like Buffett play in that group, has called the method “Misdirection and Deception.”

American Enterprise Institute (AEI) Housing Center’s Edward J. Pinto has paired the notion of “crony capitalism” with “crony advocacy.” An example of that is found in a slide by Pinto below. Pinto has decried the point that “crony advocates” often get funding from the government as well as from deep pockets special interests. Their ‘research’ is thus arguably tainted, or at least begs for additional scrutiny.

But how many have the time or inclination to follow the money trail and who is backing what for which possible motivations or purposes?

As an MHLivingNews report linked here reflects, America is increasingly becoming a land dominated by billionaire oligarchs. Our society is moving steadily away from free enterprise toward a feudalistic society. 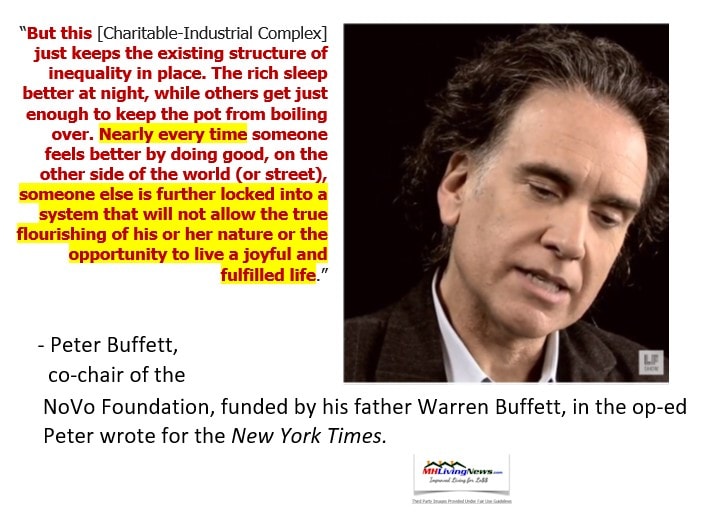 Those oligarchs – which includes Buffett, Bill Gates, Jeff Bezos, Mark Zuckerberg, Michael Bloomberg, and George Soros – can use their wealth, media, and “crony advocacy” nonprofits to push their agendas.

There are public polls – which proved in 2016 to be suspect, but were more accurate in the 2018 election cycle – that suggest that President Trump is attracting more Blacks and Hispanics. That partially explains why Michael Bloomberg is betting $100 million on the swing state of Florida, which the Cook Report previously said leaned Democratic, but is now rated as a toss up.

The methods of manipulation used by the billionaires that Warren Buffett himself said was making war on the rest of society and was winning must be understood in order to be defeated.

The evidence-based argument can be made that the leftist billionaires are pushing a dizzying array of claims and beliefs. When carefully examined, they naturally benefit those who are paying the bill.

Pay more attention to what people do than what they say. Then, follow the money. If the freedoms guaranteed by the U.S. Constitution are to survive, then there is no logical alternative to supporting President Trump and his GOP allies. They have increasingly become the party of blue-collar working class, retirees, middle-class Americans, evangelical Christians, and other believers.

The video above is as apt today as it was shortly before the 2016 general election when it was first posted, several million views ago. It also reflects how closely the Trump-Pence Administration has followed up on promises made, promises kept during the last election cycle. Actions normally speak louder than words. The challenge in modern America, and in other nations around the world, is that when the tools of propaganda are often largely in the hands of people aligned with Warren Buffett, Bill Gates, Jeff Bezos, George Soros, Michael Bloomberg, Mark Zuckerberg and the like, there is an unfair advantage that can turn almost any person or subject radioactive. 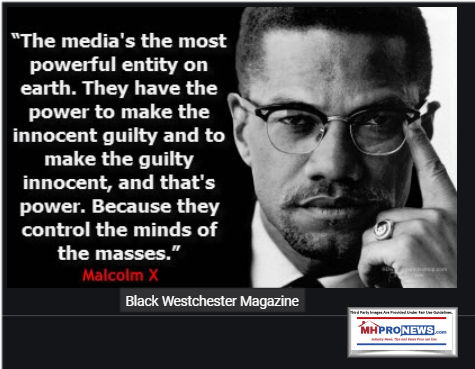 Agree or not with Malcom X or his tactics, his quote above illustrates a vexing notion. Because ‘propaganda works,’ it is necessary to be aware of the methods of the propagandists. That can start with the money and agenda for power behind those shoveling the propaganda.  Carefully examine the claims of the left, as Warren Buffett manager Tim Williams of 21st Mortgage himself de facto advocated. 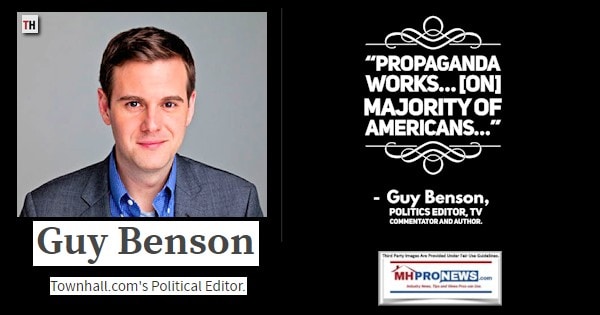 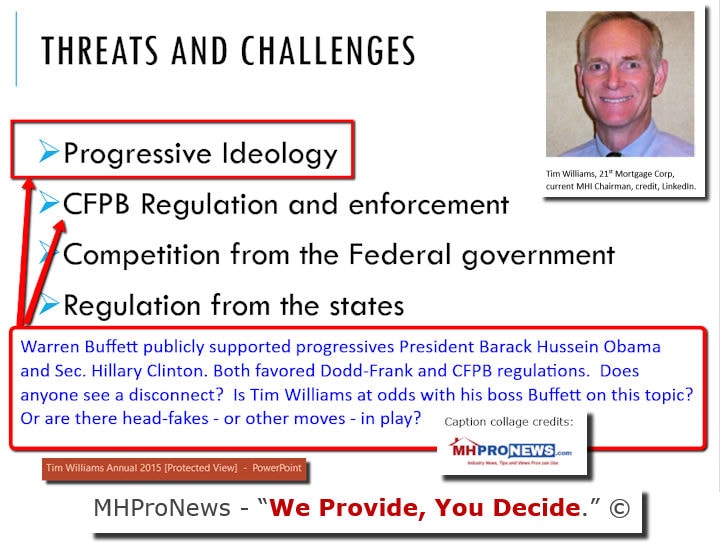 The powers that be that pay for the lies are counting on the fact that enough people – like you and me – will fall for the manipulation of the system that they win in the aftermath of voting on November 3, 2020. Do your part to disappoint them. It is your freedom and that of those you care about that are at stake.