On the same days as Amazon’s Jeff Bezos announced that he will be stepping down from that firm’s leadership, Florida Governor Ron DeSantis (R) in a 45 minute speech explained why he will be launching what is being reported as the most sweeping efforts yet to curb the growing clout of Big Tech in America.

According to right-of-center Breitbart News, the “new regulations announced by DeSantis include:

“What began as a group of upstart companies from the west coast has since transformed into an industry of monopoly communications platforms that monitor, influence, and control the flow of information in our country and among our citizens, and they do this to an extent hitherto unimaginable,” said DeSantis.

Gov. DeSantis, who was backed by President Donald J. Trump in his run for governor, accused the Silicon Valley tech giants of “clear viewpoint discrimination.” He pointed to the censorship of President Trump and the removal of Parler from the internet by Amazon’s web services and Apple and Google-controlled app stores.

“The core issue here is this: are consumers going to have the choice to consume the information they choose, or are oligarchs in Silicon Valley going to make those choices for us? No group of people should exercise such power, especially not tech billionaires in Northern California.”

Newsmax noted, “These platforms have played an increasingly decisive role in elections and have negatively impacted Americans who descend from orthodoxies favored by the big tech cartel.”

The balanced of the report, and what it might means for professionals in our industry will be our featured focus, further below.

On a night that most manufactured home connected equities rose along with the markets in general, let’s press ahead to those business-nightly features. 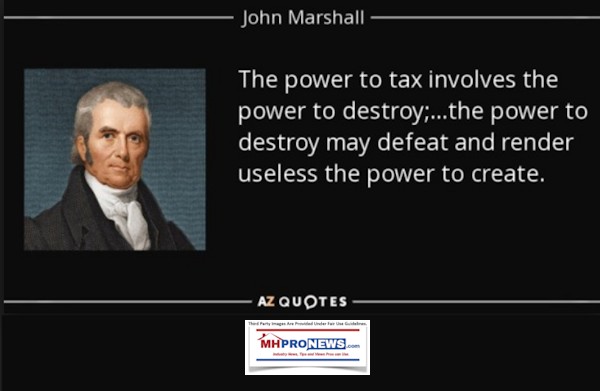 As was noted above, Florida Gov. Ron DeSantis on Tuesday 2.2.2021 proposed a law that would combat big tech’s “censorship” of right-wing political candidates and blasted the “monopoly of communications platforms” that “monitor and control” Floridians.

“These platforms have played an increasingly decisive role in elections and have negatively impacted Americans who descend from orthodoxies favored by the big tech cartel,” he added.

“That’s why in Florida we’re gonna take aim at those companies and pull back the veil and make sure those guys don’t continue to find loopholes and grey areas to live above the law,” DeSantis said. Once passed, “Under our proposal, if a technology company de-platforms a candidate for elected office in Florida during an election, that company will face a daily fine of $100,000 until the candidate’s access to the platform is restored.”

“Used to be that consumers were trusted to make their own decisions about what information to consume, about which leaders to ‘follow,’ about what news to watch,” said DeSantis. “Now those decisions are increasingly made by nameless, faceless boards of sensors.”

“What prompted me to draft this legislation was the lifetime ban of the president of the United States — the duly elected and non-removed president of the United States — forever, including after he was a private citizen, coupled with the sudden shutdown of competitors of companies by their fellow Big Tech companies,” state Rep. Randy Fine, R-Brevard County, told the Orlando Sentinel.

It should be noted that several foreign governments are weighing similar steps to reign in the power of big tech.

Presuming this legislation passes, and given that Florida is already one of the states that is pressing antitrust action against tech giants, this may foreshadow similar moves in other ‘red’ states. Blue states are also among those that “Facebook was sued by a coalition of 46 states, along with the District of Columbia and Guam, over antitrust concerns similar to those raised by the FTC,” per the Wall Street Journal.

The Washington Post pegged the number of states involved in suing Google at nearly forty on December 17, 2020 – “Nearly 40 states filed a wide-ranging antitrust lawsuit against Google.”

MHProNews has presented an exclusive copy of the report by Sam Strommen at Knudson Law that specifies specific antitrust, possible RICO and other concerns in his legal research.  That research was sent to two blue state AGs and two red state AGs. See that linked below. Strommen named the Manufactured Housing Institute in those allegations.

More on that research is planned for a report in the near term. ICYMI that “Bombshell” report, which is the runaway most read on MHProNews is linked below. Stay tuned for more…

Winter 2021…
Berkshire Hathaway is the parent company to Clayton Homes, 21st Mortgage, Vanderbilt Mortgage and other factory built housing industry suppliers.
· LCI Industries, Patrick, UFPI, and LP each are suppliers to the manufactured housing industry, among others.
· AMG, CG, and TAVFX have investments in manufactured housing related businesses. For insights from third-parties and clients about our publisher, click here.
Enjoy these ‘blast from the past’ comments.

MHProNews. MHProNews – previously a.k.a. MHMSM.com – has celebrated our 11th year of publishing, and is starting our 12the year of serving the industry as the runaway most-read trade media.

Sample Kudos over the years…

It is now 11 years and counting…and Williams, who praised our accuracy then said this.

By L.A. “Tony” Kovach – for MHLivingNews.com.
Tony earned a journalism scholarship and earned numerous awards in history and in manufactured housing. For example, he earned the prestigious Lottinville Award in history from the University of Oklahoma, where he studied history and business management. He’s a managing member and co-founder of LifeStyle Factory Homes, LLC, the parent company to MHProNews, and MHLivingNews.com. This article reflects the LLC’s and/or the writer’s position, and may or may not reflect the views of sponsors or supporters.