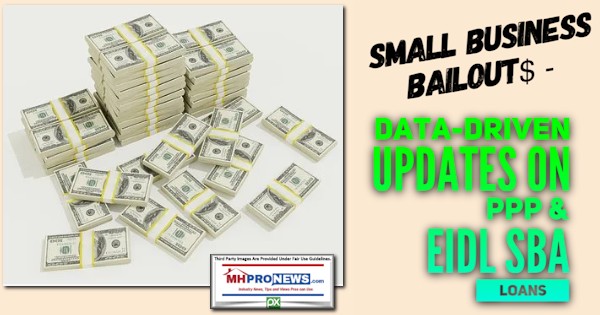 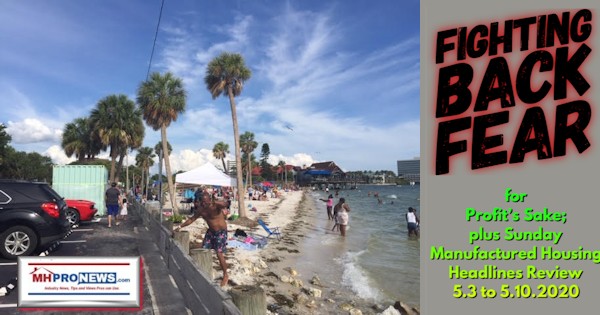 Publicly traded firms have long recognized the connection between employment levels and economic activity in general with the sale of big-ticket items like housing, vehicles, RVs or boats.

So, the brief story of ‘4 star’ Mexican restaurant in north Lakeland, FL provides a clue as to what the U.S. economy, public officials and business professionals are faced with. A manager and senior staffer said that when their dining area was closed, and they switched to take out sales only, 80 percent of their revenue was lost. Naturally, significant numbers of staffer were painfully laid off. The restaurant recently reopened following new guidance from public officials. 75 percent of their seating is gone. Prices on the newly reprinted menus were up about 20 percent. The restaurant was “busy” in the sense that the drastically reduced seating was mostly full, but it was also a Saturday night.

When someone thinks about that 33 million who have lost their jobs in roughly the past 7 weeks, a significant part of that total would come from establishments such as that local restaurant.

Because of the interconnection between various aspects of the economy, a drop in restaurant orders impacted producers of: meat, chicken, turkey, fish and other farmed goods. News reports about stress on American agricultural, farming, ranching and fishing all come into sharper focus through the lens of local restaurants.

MHProNews previously reported the ‘fear factor’ among large swatches of the population.

The survey from Gallup shown below is now a few weeks old but sheds some light on the fear factor among workers.

Stories about healthcare providers, law enforcement, naval ships, meat and poultry producers falling ill or temporarily closing due to COVID19 are mirrors of how Clayton Homes and other manufactured housing producers that had to temporarily close due to one or more workers contracting the Wuhan or CCP Virus (Communist Chinese Party Virus).

Restated, fear is based upon reality. But the insightful acronym for FEAR also plays a part here. False Evidence Appearing Real = FEAR. Has the fear over the health issues – as serious as they are – been overhyped? Several are asking, has the ‘cure’ to ‘flatten the curve’ been worse than the pandemic’s health consequences? It’s a valid question that will be explored and debated for months if not years to come.

On a beach in the Tampa-St. Petersburg metro area, MHProNews snapped the picture in the featured image above or the one below. These mostly younger people, along with some into middle age or older demographics, are possibly the front lines of the battle against fear in returning to America to a pre-CCP Virus economy and life. But another issue is looming. Should the goal be to ‘return to normal,’ or should the aim be to learn from what this Beijing and World Health Organization (WHO) cloaked pandemic has hideously taught us?

Words matter. Words have meaning. Artificially limiting discussion about certain topics or ideas based upon “political correctness” or some other standard arguably has a cost.

For example. While it may be true that discussing politics or religion with a prospective customer that one knows little about is a risky notion, it may be equally risky to never bring up those subjects – especially in a trade publication – due to “political correctness.” Limiting faith-related topics to only the “Religion” section of the New York Times is to miss the point that one’s beliefs often influence someone’s actions.

Yet people of presumably good will from time to time chide this pro-industry platform for engaging in mentions of faith or politics in certain reports. Life is a whole is interlaced with a broader moral, business, political and cultural eco-system. Just as that local restaurant – or a restaurant near you – is connected to a network of other suppliers and producers – so too life is interlaced in a wide array of vibrant aspects of everyday living.

Misuse or misunderstandings about words or the importance and value of certain ideas can result in issues that our HUD Code manufactured home industry has become all too familiar with.

While there are evidence-based reasons to doubt certain claims made by the Manufactured Housing Institute (MHI) in their costly research on their “new class of manufactured homes” which they later rebranded “CrossModTM” homes – shown further below – one point is clear.

Terms like “trailer house,” “mobile home,” “manufactured homes,” “modular housing” or “CrossModTM” each have a certain threshold of pain for the housing seeking public. That’s not new, but it logically begged for redress. Such issues will be front and center in the weeks and months ahead.

That’s outline and the details found in the report below are but one example for ever-clearer evidence supporting why MHProNews has been a leading voice against this already failed plan.

But common sense – not costly “strategic research” from a crony connection at MHI – should have led the way. On that note, it is timely to mention a developing topic. MHProNews has new insights from an MHI insider on the issue of the genesis of CrossModTM ‘research’ which will be part of an upcoming special. Watch for it in the days ahead.

There’s a sea of information relevant to our industry and how it is or may perform in the post-CCP Virus world. Another special report from MHProNews is looming on that topic.

But so too is research and news tips involving MHAction, “Frank and Dave” – the two of whom have given their input – along with much more related to that timely topic.

These articles – along with the over 20,000 others that have come before it on MHProNews – are possible due in good measure to savvy sponsors and clients who sustain this runaway most-read in our manufactured industry “News, Tips, and Views Pros Can Use” © platform.

But it is also made possible because of tips, whistleblowers and other insights from relevant sources, often from inside larger firms and organizations or are otherwise connected to the ‘belly of the beast’ that has kept manufactured housing underperforming for some 2 decades.

Further value comes from research done by MHProNews and MHLivingNews into studies and reports by others, that are analyzed for our readers.

Without apology, there is simply no other place in all of manufactured housing that generates more engagement from more professional readers, advocates, public officials, or researchers across a wide spectrum of sizes, beliefs and views than MHProNews. While reports here may draw cheers from some and jeers from others, what tens of thousands have learned is that we bring evidence, reason, accurate reporting and savvy analysis that eschews political correctness.

Don’t miss the final teaser below the headlines. It’s a major developing issue. More will be known in the next 24 to 48 hours, based on two sources from mainstream media contacts. If our early indications are correct, it could be quite significant to our industry and the nation.

Profit isn’t an automatic evil, as some negatively portray it to be. Rather profit is necessary for a properly functioning business and economy. That said, the profit motive must be limited by law and morality; after all, drug dealing, murder and other crimes are profitable but are prohibited for good reasons.

— it is all found right here on the runaway #1 in our industry’s trade media – MHProNews.

For all the mother’s in America, Happy Mother’s Day.

Programming notice: as promised, the teaser mention above is as follows.

MHProNews has been reporting for several weeks on reasons to believe that Bill Gates, the Gates Foundation and possibly others in big business such as Warren Buffett are connected to the origins and (mis)reporting on this pandemic.

Samples of prior MHProNews reports and analysis on that are linked below the byline and notices further below.

We reached out mainstream journalists on these issues.

MHProNews will unpack that once it becomes available and has been digested for a cogent report to the industry.

Until then, here are two tidbits from mainstream sources off the record to MHProNews. Select pull quotes from messages to our office are below.

Time will tell. But it may not take months for the smoke around those topics to become better understood, according to another message into MHProNews this morning.

It will be worth studying how a looming major mainstream media report compares to what MHProNews has already published weeks in advance. 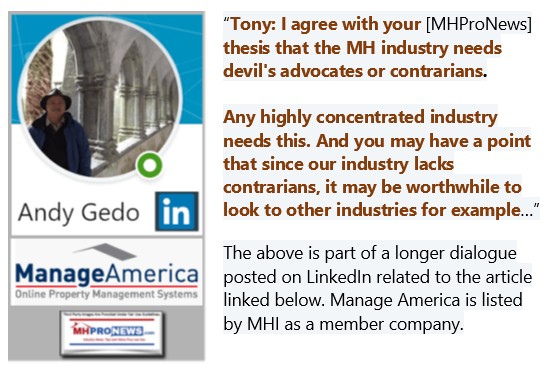 That’s a wrap on this Sunday installment of “News through the lens of manufactured homes and factory-built housing” © where we blend topics of business, culture, faith, politics and more in a manner where – “We Provide, You Decide.” © (Affordable housing, manufactured homes, week in review, reports, fact-checks, analysis, and commentary. Third-party images or content are provided under fair use guidelines for media.) (See Related Reports, further below. Text/image boxes often are hot-linked to other reports that can be access by clicking on them.)