On the left or so-called progressive side of the political aisle, several Democratic candidates for the 2020 race have made strong statements about doing more antitrust action. One of those are linked further below. Then, on the conservative side of the aisle, some Republicans and others are condemning what they see as a trend toward bias by Big Tech that violates their free speech rights.

Furthermore, President Donald J. Trump has purportedly had drafted an executive order (EO) on antitrust action. See that prior report, from the linked test image box below the byline and notices.

Against that backdrop, there is talk of how this talk of antitrust could play out in MHVille. That talk about the issue is more behind the scenes of late, but it exists. Some firms, per sources, are shoring up antitrust and other legal experts.

With that, there is a growing move in Washington, D.C. to take a more serious look at antitrust, most of the news revolves around big tech. But it should not be though that it would end there.

There’s discussion, for example, of how Cavco and their SEC woes may or may not include possible antitrust issues.  If so, that could prove difficult for Clayton Homes and their related Berkshire Hathaway manufactured home lenders.

These two videos and the pull quotes from Bloomberg Law, therefore, should be construed not only on the obvious level of big tech. Big Tech also obviously impacts manufactured housing, via marketing and in other ways.

While there is debate back and forth, one could argue that there is growing energy behind antitrust action in Washington and beyond.

So, these videos and the Bloomberg Law commentary should be construed through the lens of how this may play out for members of the Manufactured Housing Institute (MHI).

Note that the Open Market’s folks have taken specific aim at Clayton.  Some tweets are shown below. 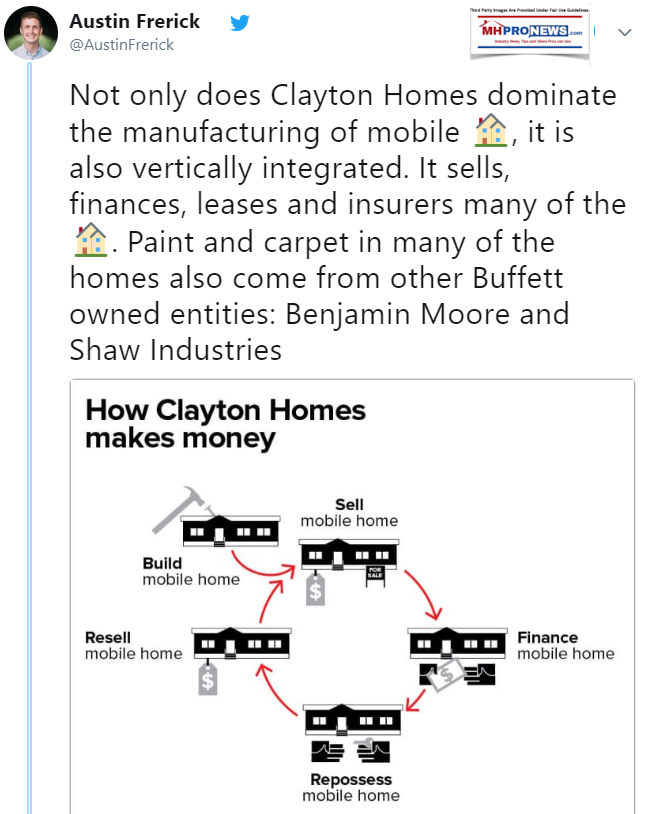 See the related reports below for more that is more manufactured housing specific, and ties together mentions of the above.

That’s this evening’s “News Through the Lens of Manufactured Homes, and Factory-Built Housing,” © where “We Provide, You Decide.” © ## (News, analysis, commentary.)

When someone is introduced to manufactured homes and their tremendous value, they are often shocked. ‘ How is this much home for such a modest price possible?’ A key part of the answer mirrors any product produced in a production center. Cars built in a driveway would cost far more than a car built in production center.

variation of a Texas maxim. Seeking bipartisanship can be dangerous, as the dark humor noted above reminds readers. But let’s risk finding common ground for the next few minutes. Affordable homes ought to be a non-partisan or bi-partisan issue. The topic of this column, properly understood, is likewise a non-partisan challenge that at least on paper enjoys bi-partisan support.