Stating the Obvious for Clarity. Manufactured housing professionals are busy doing what they do, day-by-day.

People go to work, invest in, or own a business in order to earn a good living.

There are two great laws – not fair, or decent, but great laws – that are already on the books that properly used and implemented could propel manufactured housing to the top of the nation’s choices for affordable housing.

Fully implementing those two federal laws would be good for:

Those Two Laws Are?

What is keeping these laws from being properly understood and widely implemented?

Simply put, forces inside and outside of manufactured housing.

The external issues are exacerbated by the fact that the industry’s post-production sector lacks a national association that is actively working for the interests of independent producers, retailers, and communities.

The national ‘umbrella’ association – which is the de facto post-production association, is the Manufactured Housing Institute (MHI).

Former President Barack Obama recently said something relevant to the nation. But it was particularly and profoundly insightful to manufactured housing professionals. According to the Hill, ” Former President Obama said in an interview that Fox News viewers and NPR listeners are living on different planets in terms of what news they consume.

A recent and detailed example of how they are failing the industry at large – be that failure by accident, arrogance, or design – is linked above.

There are a few things that the HUD could be doing to promote the solution they are legally charged with regulating. They have failed to do so under the now terminated leadership of Pam Danner, J.D., who was the HUD’s manufactured housing program office administrator. 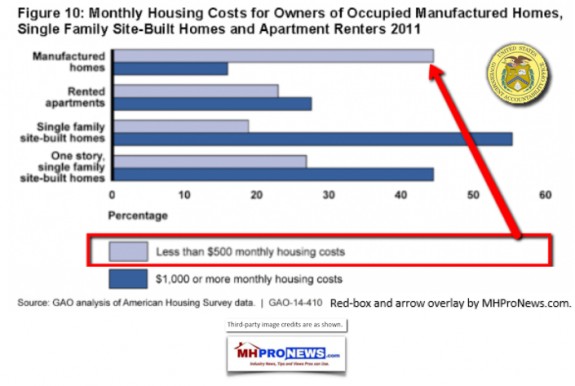 The Trump Administration has said that it will be in the business of keeping promises and enforcing the law. They’ve demonstrated a consistent trend of attempting to do exactly that in their first year in office.

With the just announced top-to-bottom review of HUD’s manufactured housing program, the timing is perfect for the industry to spotlight how the Berkshire Hathaway dominated Manufactured Housing Institute (MHI) has routinely failed the industry.  The timing is perfect to underscore how MHI’s failures to properly engage explains in part how the HUD Code manufactured housing program is disappointing in its mission under the MHIA 2000.

The reports linked from this Daily Business News post will outline how those failures have occurred.

A little math explains precisely why manufactured housing has been allowed to flounder.

In a trillion-dollar a year housing industry, Harvard University’s Eric Belksy and others noted some years ago that manufactured housing was poised to surge to the fore-front of housing. When Belsky wrote those words, he knew about the lending problems that already existed at that time.

Kevin Clayton in the video interview shown explains in his own words how Buffett hated both foreign and domestic competition.  He repeatedly references “the Moat,” and Clayton candidly says that Buffett preaches “the Moat” to his company CEOs.

Buffett supported big government candidates, such as Barack Obama and Hillary Clinton, who in turn supported regulations that – combined with his own choking off of lending to third parties – killed off over time, or forced to sell out for less – thousands of independent communities, retailers and independent home producers.

HUD’s new leadership must be made aware of this pattern.

While this may appear to be political, it is rather a question of crony capitalism at the highest levels.

It is worthy of congressional oversight, which some Democrats have called for too.

President Trump has personally signaled in broad terms his willingness to use anti-trust (anti-monopoly laws). This is a bi-partisan issue.

The time to free manufactured housing to fully and properly use those two good laws, and implement others on the books such as FHA, could be a new economic boom for millions of Americans.

Implementing those 2 good laws can save taxpayers billions, while earning private enterprise billions.

MHProNews estimates that at current HUD Code manufactured home prices, building the 8 million needed affordable housing units is worth about $500 billion dollars at retail. After taxes and expenses, that’s billions of dollars to the bottom lines of business owners and investors.

By shadow boxing – appearing to advocate, when they are in fact failing to be effective for any but a few big players – the Manufactured Housing Institute (MHI) is apparently guilty of being a tool of Berkshire Hathaway and what Maxine Waters and others have called their “near monopoly.”

Many believe there is nothing ‘near’ about the monopolistic power of Berkshire Hathaway.

It exists. That’s not a slam on the thousands of good people working for those companies. Many of those Clayton, 21st Vanderbilt staffers are among our thousands of readers.

But the monopolistic pattern ought to be a potential indictment on those who’ve misused their influence and power to the harm of thousands of businesses, millions of consumers, and taxpayers.

The time is now to act to enforce those two good laws.

The time has come clean up the mess that crony capitalism working with MHI and the heavy hand of government has produced.

What say you? “We Provide, You Decide.” © © ## (News, fisking, analysis, commentary, links to documents, allegations, comments from members, etc.)

Note 1: Thousands do it. For those industry pros, investors, and MH advocates who want to sign up to our industry leading headline news/updates – typically sent twice weekly – please click here to sign up in just seconds.