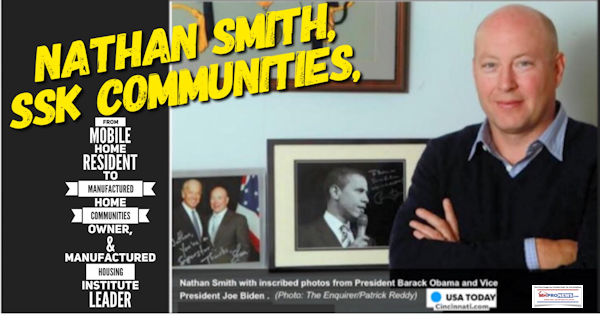 Erlanger, KY is across the Ohio River and near Cincinnati, Ohio. Fort Mitchell, KY is nearby too. So, it is no surprise when a successful business professional and highly-visibly Democratic supporter was covered in a profile by Cincinnati, which said as follows. 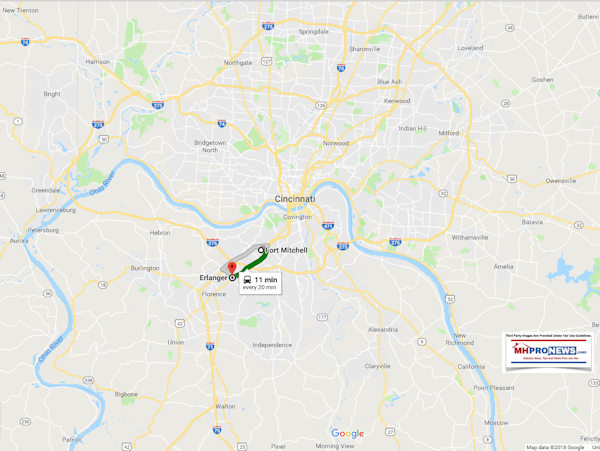 “After Nathan Smith was born, his parents brought him to a single-wide mobile home perched on the side of a mountain in southeastern Kentucky.”

If you check the dates, that dwelling would indeed have been a true pre-HUD Code mobile home.

Here is an extended quote from that same source.  The brown text for direct quotes are added by MHProNews.

Smith has since leveraged his success in business to become one of the most effective and influential Democratic fundraisers in Kentucky.

“For the last 10 or 12 years, Nathan has probably been the most energetic and committed political and financial backer of Democrats from Northern Kentucky,” Kentucky Attorney General Jack Conway said. “He is an indefatigable supporter of Democrats.”

Conway, also a Democrat, recalls campaigning in southeastern Kentucky when he heard he needed to meet Smith’s parents in Bimble, a small community outside of Barbourville.

“The next thing I knew, the car was pulling up a little road alongside a junkyard on the side of a hill,” Conway said. “I asked for Nathan’s father and a guy spit out his tobacco and said, ‘You found him.’ ”

Smith has never forgotten the values he learned during his humble upbringing, Conway said.

“Nathan has a big heart,” Conway said. “If he is supporting you, he doesn’t just write you a check. He wants to get his friends behind you. He is one of the best in state at gathering support for you.”

Cincinnati is part of the USA Today group of media publications.  You can see below where they stand in the left-right media chart. 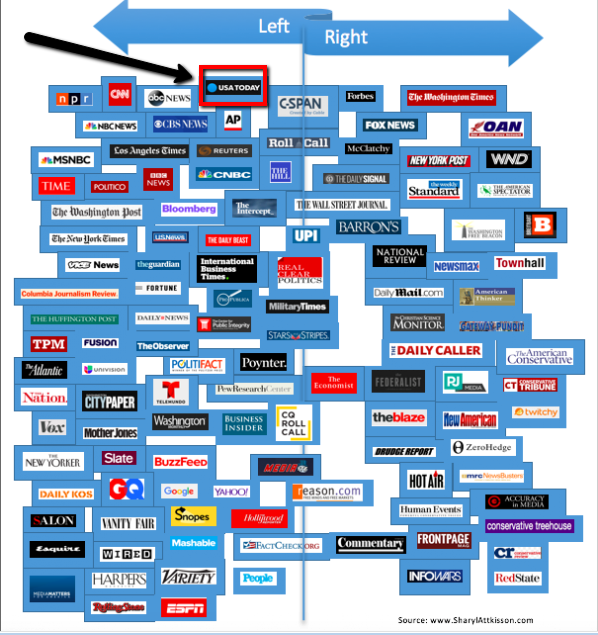 As Sharyl Attkisson’s media bias infographic above reflects, USA Today leans left, or put differently, they are more pro-Democratic than Republican (GOP).  You can finish their article on Smith, at this link here.

Why This Nathan Smith Profile Now?

There are several reasons to bring up SSK’s Nathan Smith at this time. One is because he remains a mover and shaker at the Manufactured Housing Institute (MHI). Smith, MHI and MHI PAC are all busily trying to help shape the 2018 midterms.

As or more revealing, Smith has ties to former President Barack Obama, Secretary Hillary Clinton, and is an active, long-time Democratic supporter. Various key U.S. Senate, gubernatorial, and other races will be influenced by Smith’s campaign support.

Smith’s support has included, but is not limited to, Sherrod Brown (D-OH), and Joe Donnelly (D-IN). According to federal filings, both Brown and Donnelly have reportedly received MHI PAC funds.

SSK’s leader is quoted by MHI as saying, “The Manufactured Housing Institute Political Action Committee (MHI-PAC) is the only federally-registered PAC dedicated to supporting bipartisan federal candidates who support manufactured and modular housing as an essential homeownership option.  MHI-PAC allows MHI members from every segment of the industry to pool permissible, voluntary personal financial contributions to support federal candidates for the U.S. Senate and U.S. House of Representatives. Thank you to all MHI-PAC contributors who are advancing our industry’s dedication to providing affordable, quality homes and financing to all families.”

— Nathan Smith, Chairman of the MHI-PAC and Partner at SSK Communities

That’s an interesting commentary by Smith. Weren’t Democrats the party that passed Dodd-Frank, that throttled manufactured housing lending for years?  Didn’t Democrats pass ObamaCare, which laid heavy burdens on small businesses, and kept millions of workers from having a single, fulltime, living-wage jobs?

How can MHI staff or the MHI Executive Committee board members look their members in the face, and still claim that they’ve worked to advance the interests of small businesses, or manufactured home industry lending?

Isn’t there ample evidence that the opposite is true? Recall the comment linked below from former MHI VP Jason Boehlert, who admitted in writing that with Barack Obama in the White House, the CFPB wouldn’t change their rules or regulations on industry lending?

While commentators will be picking over the remains of the 2012 elections for weeks to come and discussing what the political landscape will look like over the coming year and what impact the elections will have as Congress prepares to return for a lame-duck session, MHI wanted to provide members with some feedback and analysis of the immediate aftermath and outlook for the coming weeks.

Aren’t the disconnects between what MHI – and what some of their leaders, like Nathan Smith – say and do in stark contrast to what they posture and proclaim in their messages and meetings?

In fact, then President Obama threatened to veto MHI’s Preserving Access, had it passed.  These are among the reasons that facts, evidence and history all matter.

Donald Trump, Jr., son of President Donald J. Trump wrote a recent op-ed for Salem News where he named Senator Brown as an opponent to his father’s agenda. Instead, Trump Jr. said those who want to Make America Great Again (MAGA) should support, “…Congressman Jim Renacci is [a pro-Trump MAGA backer] — which is why my father endorsed his candidacy for senator. Unlike Brown, Renacci is a successful businessman who knows what it takes to continue the momentum of the Trump agenda.”

According to federal records, MHI’s PAC has cut checks to members of both parties. Among them is Joe Donnelly (D-IN), who President of the United States (POTUS) Donald J. Trump is actively campaigning against.

In the tight battle for the U.S. Senate, several checks have been cut by MHI PAC to key Democrats.

Among them is Senator Tim Kaine (D-VA), who as MHProNews has reminded industry pros, was Secretary Hillary Clinton’s Democratic running mate for president against Donald J. Trump in 2016. See the photo collage, further above.

Nathan Smith is colorful, affable, and popular. He has given to members of both major parties. But his loyalty is to Democrats. He leads the MHI PAC. He and MHI are in key races arguably working against the interests of small- to midsize-businesses, which are being “consolidated” by Berkshire’s brands, and other ‘big boy’ people just like himself.

The short video in that screen capture above is the one that follows. It’s must viewing for anyone that wants to understand what is actually going on in the foreground and background of the manufactured housing industry’s politics and business climate. Note that in the video, Smith candidly admits MHIs numerous mistakes.

But what Smith said must be seen through the lens of these twin adages.

It should be noted that the Manufactured Housing Association for Regulatory Reform (MHARR) has no PAC, but they do engage in a nonpartisan manner. They are on record as supporting the Trump agenda of regulatory roll backs.

Meanwhile, MHI has postured and pivoted on a variety of issues, but they’ve in fact followed the lead of Buffett’s Berkshire brands in manufactured housing.

Nathan Smith led SSK Communities offices are at 467 Erlanger Road, Suite 200 Erlanger, KY 41018-1495. This report is part one of what is planned as a multi-part series here on the Daily Business News on MHProNews.

The Daily Business News will provide more insights into Smith, MHI, MHI PAC, and the ways they have and still are arguably undermining the Trump Administration pro-growth, pro-worker “American Business” and “American Workers” agenda. That’s the latest in “News Through the Lens of Manufactured Homes, and Factory-Built Housing,” © where “We Provide, You Decide.” ©. ## (News, analysis, and commentary.)