Skip to content
“Terrified” – Federal Judge Robert Mariani, Appointed by President Obama, Orders Closure of Manufactured Home “Trailer Park”
The Party is Over, So What’s Next? Corruption and Evil Boils Down to This. Plus, Sunday Weekly Headlines Review

Taxes. Appearances. Uncertainty about the future.

Those are some of the excuses, err, reasons that trustees of South Elgin, a part of the Chicago metro, rejected a 296 unit manufactured home community development that would have served residents 55 and older.

It’s a story that affordable housing and manufactured home industry pros know, but as 2018 winds down, illustrates just how much work lies ahead.

Freelance journalist Janelle Walker’s Courier News report ironically made the Chicago Tribune. The Tribune has had serious financial ties to Sam Zell, whose Equity LifeStyle Properties (ELS) is one of the top two community operations in manufactured housing.

In a split decision, the South Elgin Village Board declined a proposal late last month for a new manufactured home community. Developers PND 3001 Investments had sought a zoning change for a special use permit, said Walker, for a site plan approval for the 296 units it wanted to place on an 88-acre site on Umbdenstock Road.

Walker was writing for the general public, so an industry professional wouldn’t normally need some details her generally fine narrative provided.

“But concerns about how the state taxes manufactured homes — also called mobile homes — and how those taxes would be split among governing bodies stopped some trustees from approving the project.

The state of Illinois taxes mobile homes as “chattel.” While a buyer pays sales tax on the initial home purchase, an annual fee to the state and rent to the owner for use of the land, the property owner only pays taxes for the land on which the homes are located,” per the Tribune account. 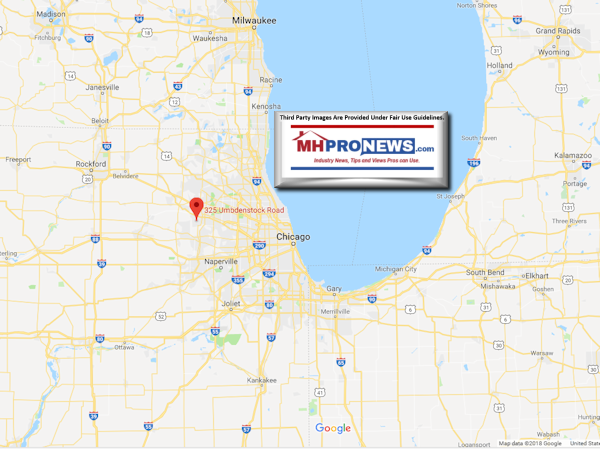 Walker said that trustees John Sweet and Mike Kolodziej voted in favor of the development.

“They look nice … different from a stick-built home but not really,” Sweet said. “I think it is an alternative,” and adds another option to the village’s housing stock, explaining his vote, adding “We need more diversity in our housing.”

But South Elgin village board trustee Scott Richmond said he could not support the development.

“I don’t think it is the right project for us,” said Richmond. “This puts the village tax base at risk. This project on this land is not appropriate.”

The land is currently zoned for industrial use, explained Walker. But there are housing developments on two sides with an industrial park to the south. To the east is farmland, which may also be the target for future development activity.

PND’s plan included an agreed to limit the development to residents 55 and older or restricting children from living there for more than 14 days at a time.  The PND Plan also included an attached garage for each home. All of those items were apparently added following initial discussions with the South Elgin Planning and Zoning Commission and later with the Village Board.

Larry Lapin of PND 3001 estimated taxes on the property at some $400,000 a year. To mollify the concerns over the relatively lower tax revenue such a project would bring compared to other possible projects, the developers had also offered to add a clause to the agreement to pay an additional $350 per unit.  That $350 bump was to be divided between the village and the South Elgin & Countryside Fire Protection District.

A YIMBY vs. NIMBY View of the South Elgin Case

Trustee Greg Lieser agreed with Richmond, arguing that if the property was sold, new owners would not follow agreements being made in the present, or would seek to have them changed.  But isn’t that ‘concern’ possible for other kinds of developments too? Does that argument against this proposed project just mask a NIMBYite view against affordable homes in general, or manufactured homes specifically?

“There is too much uncertainty with the owners and rent, and what this might look like in 10 or 20 years. I do appreciate that you listened. I wish you would have come in originally with a solid plan,” Lieser said.  Rephrased, was Lieser concerned that manufactured homes would – after a decade or two – somehow morph into the appearance of 70 year old trailers houses?  Isn’t prejudice and more at work in the background of this South Elgin tale?

As 2018 winds down, and 2019 looms, projects like this reveals just how much work lies ahead for the greater acceptance of affordable housing in general, and manufactured homes in particular.

Is MHI’s failure to act due in part to dominating Clayton Homes increased attraction to more profitable conventional housing?  That’s but one conflict of interest that bears more exploration, and which mainstream media and advocacy groups arguably ought to explore and spotlight.

A prior Daily Business News on MHProNews report on this same project is found under the related reports, linked further below the disclosures and bylines.  “We Provide, You Decide.” © ## (News , analysis, and commentary.)

Washington, D.C., November 15, 2017 – The Board of Directors of the Manufactured Housing Association for Regulatory Reform (MHARR) has authorized the public release of a comprehensive internal study by the Association of the past, present and future representation of the post-production sector (PPS) of the federally-regulated manufactured housing industry.

The Party is Over, So What’s Next? Corruption and Evil Boils Down to This. Plus, Sunday Weekly Headlines Review

“some of the largest companies in the country fear your power,” “evidence suggests…your company…used…power to harm…rivals”-Rep McBath, plus Manufactured Home Investing, Stock Updates

Senior Official – ”We may have created a Frankenstein” – plus Manufactured Housing Stocks, Investing Updates