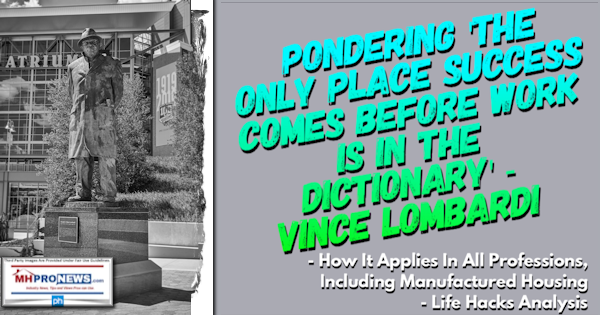 Millions find thoughtful, insightful, or inspirational quotations like “The only place success comes before work is in the dictionary” – Vince Lombardi – useful, as is evidenced by the number of websites dedicated to quotable quotes. Journalists, politicians, pundits, and business professionals often use pity or insightful quotations in articles, presentations, or their addresses. Knowing the public interest in the power of a good quotation and the sticking power in the mind of a keen statement – speechwriters often try to work some powerful phrase – their own or that of others – into their talking points. They are hoping the news media will pick and use one or more lines, use it, and that the quote(s) may be  further amplified by social media, etc. Oxford Languages defines a ‘life hack’ as: “a strategy or technique adopted in order to manage one’s time and daily activities in a more efficient way.” Against that backdrop and disclosing this writer’s personal belief in the statement by Lombardi in the light of what follows, let’s briefly look at what that quotation doesn’t say, which is every bit as important to manufactured housing industry pros as well as those in every other profession.

Before proceeding, let’s note for the sake of those who don’t already know that Lombardi is admired, in part, because he was ‘a winner’ as a National Football League (NFL) head coach. “He never had a losing season as head coach in the NFL, compiling a regular-season winning percentage of 73.8% (96–34–6), and 90% (9–1) in the postseason for an overall record of 105 wins, 35 losses and 6 ties in the NFL,” says Wikipedia.

Lombardi was a person of deep Christian faith. He was therefore keenly aware of the Ten Commandments. Evidence of that is this Lombardi quotation, per AZQuotes: “There are three things important to every man in this locker room. His God, his family, and the Green Bay Packers. In that order.” Lombardi believed that God and family were more important than the organization or team.

The commandments, properly understood, are a list of do this, don’t do that instructions from the Creator of all things and people. That makes the commandments powerful insights into human nature. Well over 2 billion Christians and millions of Jews share those commandments, and Islam and other religions have some similar insights (i.e.: do this, don’t do that) under a different name. When believers are told not to bear false witness, it is also a reminder that deceptions of various types are a problem confronting humanity. When believers are taught by the Commandments not to steal, the evidence of Scripture is that a wide range of deceptive behavior that aims to defraud or limit people’s rights to property exist beyond stealing via ordinary theft or robbery.

Jesus of Nazareth, whom Lombardi and other Christians worldwide hold to be the long-awaited Messiah, knew these realities and more. So, that topline and headline quotation has to be construed in the light of those realities.

To be successful in football, or any other area of human endeavor, Lombardi was quite right to stress the importance of goal-oriented work and the solid habits of ongoing preparation.

To be blunt, x number of people in a given society knowingly cheat, swindle, or otherwise violate the rules of their profession, the law, and God’s commands. Some of those people become wildly successful in a financial sense.

Does the reality of law or Commandment breakers who appear to be wealthy financially contradict in any way the truth of God’s teachings? In a word, no.

Lombardi, per AZ Quotes, also said: “When we place our dependence in God, we are unencumbered, and we have no worry. In fact, we may even be reckless, insofar as our part in the production is concerned. This confidence, this sureness of action, is both contagious and an aid to the perfect action. The rest is in the hands of God – and this is the same God, gentlemen, who has won all His battles up to now.”

To rephrase that statement of Lombardi’s, when we trust and depend upon the wisdom of God’s teachings, a kind of reckless abandon in God and our human endeavors can occur.  But the Lombardi quotation also presumes that God has won “all His battles” from the beginning of time until this moment. That’s a powerful statement, but it is also fair to question it. Really? Has the Creator of all things won every battle?

This column won’t directly answer those two questions in depth, because it would require a lengthy theological and philosophical discussion to do it justice. Simply, God who believers traditionally hold knows all things from the first moment of time to the end of time, so ordered the Universe of Creation in a fashion where true justice as well as authentic mercy occurs. It may not always occur in a visible way to mortal eyes, but perfect justice with appropriate mercy occurs. God gave each mortal free will. What we do with that free will matters. How we live our lives impacts if we end up in hell or ultimately end up with eternal bliss in heaven. That heavenly outcome is the pinnacle of true success, which even a financially ‘poor’ person can obtain.

Lombardi didn’t pretend to be a perfect person. He didn’t pretend that his co-believers were all perfect people either. The famous coach well understood that the reason we needed a system of redemption is precisely because we mortals fail, fall into sin, and need to routinely turn to God for mercy and forgiveness, having confidence in that forgiveness. Lombardi, a Catholic, engaged with the sacraments of his faith. “I derived my strength from daily mass and [holy] communion.”

Lombardi’s won-loss record of 73.8% in the regular season and 90 percent in the post-season is obviously impressive. He was a winner. He was successful. His success includes the point that there were numerous individual victories as well as setbacks. Lombardi believed that hard work, well planned efforts, paid off.

Some Lombardi gems, from Google:

“Show me a good loser, and I’ll show you a loser.” “Winning isn’t everything, it’s the only thing.” “The objective is to win: fairly, squarely, decently, win by the rules, but still win.” “A team that thinks it’s going to lose is going to lose.” “Winners never quit and quitters never win.” “Perfection is not attainable. But if we chase perfection, we can catch excellence.”

Then he [Jesus] said to the crowd, “Take care to guard against all greed, for though one may be rich, one’s life does not consist of possessions.”

Then he [Jesus] told them a parable. “There was a rich man whose land produced a bountiful harvest. He asked himself, ‘What shall I do, for I do not have space to store my harvest?’ And he said, ‘This is what I shall do: I shall tear down my barns and build larger ones. There I shall store all my grain and other goods and I shall say to myself, “Now as for you, you have so many good things stored up for many years, rest, eat, drink, be merry!”’ But God said to him, ‘You fool, this night your life will be demanded of you; and the things you have prepared, to whom will they belong?’ Thus will it be for all who store up treasure for themselves but are not rich in what matters to God.”

From VinceLombardi.com is the following gem of a talk on “What it Takes to be Number One.”

Every time a football player goes to ply his trade he’s got to play from the ground up – from the soles of his feet right up to his head. Every inch of him has to play. Some guys play with their heads. That’s O.K. You’ve got to be smart to be number one in any business. But more importantly, you’ve got to play with your heart, with every fiber of your body. If you’re lucky enough to find a guy with a lot of head and a lot of heart, he’s never going to come off the field second.

Running a football team is no different than running any other kind of organization – an army, a political party or a business. The principles are the same. The object is to win – to beat the other guy. Maybe that sounds hard or cruel. I don’t think it is.

And in truth, I’ve never known a man worth his salt who in the long run, deep down in his heart, didn’t appreciate the grind, the discipline. There is something in good men that really yearns for discipline and the harsh reality of head to head combat.

I don’t say these things because I believe in the ‘brute’ nature of men or that men must be brutalized to be combative. I believe in God, and I believe in human decency. But I firmly believe that any man’s finest hour — his greatest fulfillment to all he holds dear — is that moment when he has worked his heart out in a good cause and lies exhausted on the field of battle – victorious.”

Thanks Vince, but more important, thank God for people like Vince who played honestly, worked hard, and routinely emerged victorious. We need more of this type of will and discipline in our industry, our times, and every profession.

In that broader Scriptural and Lombardi context, “The Only Place Success Comes Before Work is in the Dictionary.” More on this later, but enough said for today.  ##

[Updates above were edited by Tamas A.R. Kovach.]