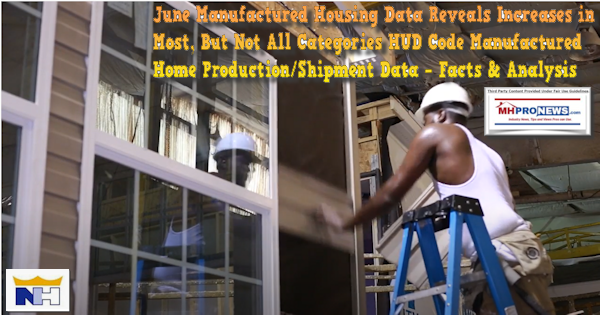 Washington, D.C., August 3, 2021 – The Manufactured Housing Association for Regulatory Reform (MHARR) reports that according to official statistics compiled on behalf of the U.S. Department of Housing and Urban Development (HUD), HUD Code manufactured housing industry year-over-year production increased in June 2021. Just-released statistics indicate that HUD Code manufacturers produced 9,430 homes in June 2021, a 24.6% increase over the 7,568 new HUD Code homes produced during June 2020. Cumulative production for 2021 now totals 53,759 homes, a 16.4% increase over the 46,165 homes produced during the same period in 2020.

A further analysis of the official industry statistics shows that the top ten shipment states from the beginning of the industry production rebound in August 2011 through June 2021 — with cumulative, monthly, current year (2021) and prior year (2020) shipments per category as indicated — are:

The June 2021 production data results in no changes to the cumulative top-ten list.

As noted, the only modest trend-bucker among the data points shown by MHARR is in California. With affordable housing in great need there, and with factory built Accessory Dwelling Units (ADU) sales surging there, there ought to be concerns by independents who do business in that state.

The California insight in the report above is significant. Once California ‘legalized’ the placement of ADUs by issuing a broad preemption, sales surged. For details, see that report linked above.

It was the Manufactured Housing Institute’s previous President and CEO Richard “Dick” Jennison who said that the industry should be aiming for 500,000 new home sales. That was about 5 years ago.

But instead of instituting a program to support the promotion and public education of all manufactured homes, MHI rolled out a program that has demonstrably failed. Their program created a new and untested “new class of manufactured housing.” With the ‘rollout’ of the Clayton Homes backed CrossModTM homes scheme, manufactured housing production slumped.  A recent report from Tierra Grande by the Texas Real Estate Center confirmed years of reports and analysis by MHProNews that warned early on that what was eventually branded as CrossModTM was a Trojan Horse.

So, to put this in a wider context, while RV and conventional housing sales surged, and while ADU sales in California surged even more, manufactured housing under MHI’s ‘leadership’ manufactured housing went into a 2½ year slide.  It is only in the past 4 months that manufactured homes have reversed that trend. Put differently, there is no apparent connectivity between anything that MHI has done that explains this surge. It is rather a result of the high demand for housing.

MHI has arguably and demonstrably failed in doing what they have postured. On paper, in federal comments and in emails to their members, they seem to say similar things as MHARR. Note to new readers. MHARR is a production association. MHI is an umbrella association that includes production and post-production interests.

MHProNews has asked MHI to respond to the evidence-based concerns and allegations that they are apparently working for the consolidation of the industry’s larger brands. MHProNews will report as warranted if MHI addresses, rather than ducks, the latest inquiry.

Learn more in the reports linked herein and further below. ##

MHProNews base image credit: The still in the featured image is from the video shown below. Several production as well as interior images, plus some short interviews are shown.

Notice to MHI members. Follow up emails to several MHI linked attorneys – not one disputed the claim by the law firm cited in the report below. MHI has demonstrably created an ‘amen corner,’ an echo chamber that parrots their talking points. MHI and those involved have not denied that evidence-based allegation.

But as, or perhaps more important, is this below.  For those MHI members who are aware of what is occurring, but who fail to stand up or speak up in some form or fashion, legal experts cited below say that it could make those members vulnerable to legal action, just as MHI is. To learn more, see the related report linked below.