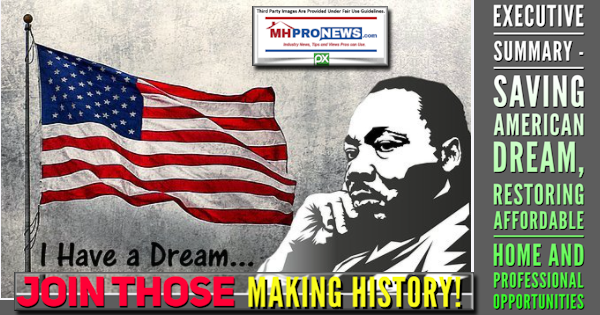 Among the literally millions of individual visits to Manufactured Home Professional News (MHProNews) in 2020, thousands of readers like you selected those ranked in the report below as the ones that mattered the most. You can read through those top reports month by month, via the link below.

For those with an eye on the value of the rule of law, the New Year’s Day deep dive report linked below takes independent thinkers’ step-by-step through the historic challenges and next steps needed to keep the American Dream alive.  This is useful so that tens of millions might thrive instead of merely survive.

Our central Florida address is served by one Democratic and two Republican Congressional lawmakers. What follows is my message to them on 1.2.2021. You can use the link below and modify this for your own use as you deem best.  Note that the length of the message is just below the maximum  the ‘one button submit’ email tool handles. Many Americans are clearly making their voices heard, as a dozen Senators (as of the time new members are sworn in) have officially join those from the House – estimated at 140 lawmakers who will make protest certification at the Joint Session of Congress on January 6, 2021.

— Body of emailed message to lawmakers as shown —

I hope you agree that election fraud strikes at the very foundation of the American Republic. No amount of election fraud should be tolerated. The ongoing evidence of fraud that experts cited by the Navarro Report and others dwarfs the number needed in seven key battleground states to #DoNotCertify Biden-Harris electors and to accept instead the alternative slate of Trump-Pence Electoral College votes.

The will of some 75 million Trump-Pence voters that are NOT in question deserve your full support to #DoNotCertify, #StopTheSteal, and vote #January6 to reflect the will of Florida’s and America’s voters.  The Boston Globe alert just received reflect sources saying: “A coalition of 11 Republican senators announced Saturday it will challenge the outcome of the presidential election by voting to reject electors from some states when Congress meets next week to certify the Electoral College…” Over 150 members of Congress and counting are already on board.

This is not a partisan issue. This is a matter of upholding your oath of office to protect Americans from enemies foreign and domestic.

Thank you in advance for doing what your oath requires, what the evidence supports, and what the Constitution makes possible for historic moments like this. God-speed.

## End of emailed message to lawmakers as shown. ##

Notice that the submission tool records you name and address, so that only those living in that congressman’s or senators’ state can submit comments. That means, they have my name and address, which is fine by me and prudent in keeping comments from those who are truly constituents of a given lawmaker.

The email tool will send a 4 digit confirmation code you will need to use before it is sent. An example of the confirmation message received from lawmakers is attached at this link here.

The 11 U.S. Senators followed the lead from Senator Josh Hawley (MO-R), as is reflected in tweet and connected press release below. The letter from those 11 Senators is linked here as a download.

NEW — Senator Josh Hawley announced he will object during the Electoral College certification process on Jan 6. He will call for Congress to launch a full investigation of potential fraud and election irregularities and enact election integrity measures. https://t.co/zy1GIlxbnJ pic.twitter.com/V3R5GUJlUZ

If you prefer, you can contact lawmakers individually via the information linked from the official government site below.

LifeSiteNews reported that an “objector congressmen from North Carolina stated: “The right to vote in a free and fair election is the cornerstone of our Republic. Attempts to subvert the Constitutional authority of state legislatures to conduct elections strikes at the very heart of representative government. I choose to stand in the breach, to fight for us.”

American government without duly elected representatives would be a sham that mocks the sacrifices so many fought, bled, and even died for to secure and defend. Take a few moments to join those who are making history by standing “in the breach to fight for us” all.

There are few things beyond prayer that could be more important to do at this time.  To learn more, see the related reports linked above and below. That’s a wrap on this installment of manufactured housing “Industry News, Tips, and Views Pros Can Use” © where “We Provide, You Decide.” © ## (Affordable housing, manufactured homes, reports, fact-checks, analysis, and commentary. Third-party images or content are provided under fair use guidelines for media.) (See Related Reports, further below. Text/image boxes often are hot-linked to other reports that can be access by clicking on them.)