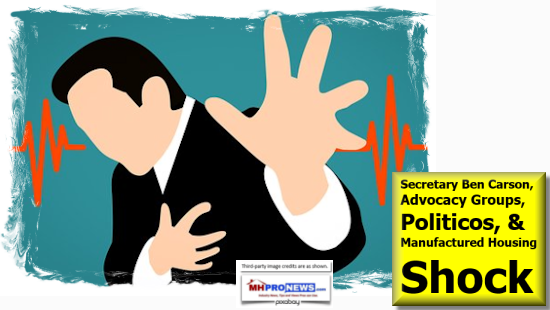 Affordable housing, including manufactured homes, is not a partisan issue.

At least, it shouldn’t be.

When HUD Secretary Ben Carson, M.D., and Senator Thom Tillis (R-NC) shared the brief exchange below, there was an energy in Carson’s words.

It’s an energy – “a shock” – that many have experienced over the years when it comes to the surprising realities vs. the unjust, troubled stigmas attached to manufactured homes.

So, why aren’t their more such moments of positive shocks for the manufactured home industry?

Let’s look at the facts for some clues.

Whenever the manufactured housing (MH) industry acted in a rational, and cohesive fashion, it has routinely been able to accomplish in Congress what it needed to do.

That’s true because at its heart, the MH industry has a great, and non-partisan story.

That’s what a dispassionate look at the periodic history of the industry reveals.

•      And again in 2008, when the Duty to Serve (DTS) Manufactured Housing was passed as part of the Housing and Economic Recovery Act (HERA).

So when the industry acts cohesively it succeeds. So, why doesn’t it do so more often?

Since before the founding of what today is called the Manufactured Housing Association for Regulatory Reform (MHARR), there’s long been a split between larger and smaller “independent” producers of HUD Code manufactured homes.

MHARR was a breakaway from the body that today is known as the Manufactured Housing Institute (MHI). MHARR was created precisely because of those differing points of view between bigger and smaller producers of federally regulated HUD Code manufactured homes.

In several states, there are manufactured home consumer groups that emerged some years ago.

While “resident groups” engage on issues such as finance, those residents/manufactured home owner associations tend to focus on issues relating to land lease communities.

In California, there tends to be fast and hard lines between the MH Industry and resident groups.

Meanwhile, in places such as Ohio and Florida, those state MH Industry trade associations have at times meet and worked successfully with resident groups on key issues.

Foundations and nonprofit groups have a history of positive interest in manufactured housing dating back at least some two decades.

For example, as a Daily Business News yesterday reported, CFED – which rebranded as Prosperity Now – is largely a serious and positive advocate for manufactured homes. 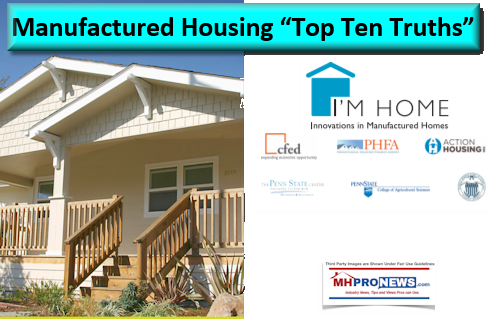 For years, CFED/Prosperity Now worked on projects that taken as a whole, promote manufactured homes as a tool for personal wealth building, especially for minorities, and lower income Americans of all ethnic groups.

CFED/Prosperity Now research has produced reams of documentation that arguably ought to be done by the Manufactured Housing Institute (MHI). 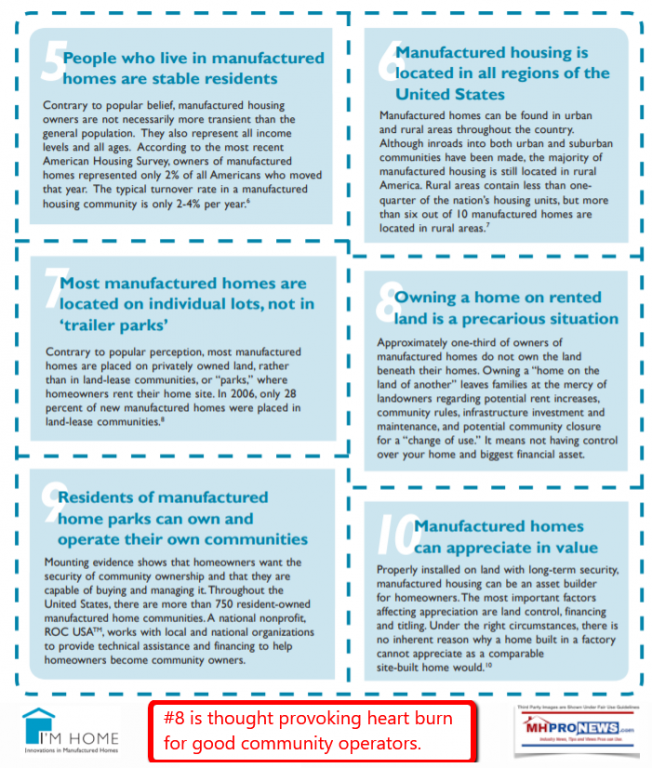 Based upon their overall positive work advocating for manufactured homes, it’s a little baffling for outsiders looking in to see conflict between MHI and Prosperity Now.

But conflicts do exist between MHI and Prosperity Now, on issues that include land lease communities, but also on financing. Prosperity Now has been a loud opponent to the Preserving Access to Manufactured Housing Act.

Like them or not, consider for a moment the perspective of Prosperity Now on these two issues:

•      the issues of “insecurity” for residents in land lease communities,

Absent those two bullets, Prosperity Now should be seen by the vast majority of industry pros as a strong advocate for manufactured housing.

So why hasn’t MHI – the industry’s self-proclaimed “umbrella” and “post-production” association – found a way to work directly with Prosperity Now, when Ohio and Florida have found ways to work with their resident groups? Fair question, right?

So for any who believe that it is only MHI and MHARR alone who ‘can’t get along,’ they are mistaken or misinformed.

This writer, while an MHI member – perhaps naively – attempted for years to get MHI and MHARR to work together.

The photo taken by MHProNews of Dick Jennison and Mark Weiss, J.D., shaking hands was just one tiny example symbolic of that effort.

MHI in meetings has reportedly told their members that the consumer groups “can not be reasoned with.”

Something similar has been said in MHI meetings about MHARR. One elected executive committee member stood at an MHI meeting a few years ago, and proclaimed that the “elephant in the room” was MHARR’s then president, Danny Ghorbani.

Yet as noted above, history shows that MHI and MHARR have achieved good things when they pulled together.

MHARR seems to have a better working relationship with the resident group, NMHOA than MHI does.

We’ll pose a question that we will leave dangling for now.

Why is it that MHI can get along with MHARR, but only at times?

Yet for most of the the past 20 years (+/-), the two are at odds, because one association arguably favors larger players, while the other fights for the rights of smaller, independent companies.

It’s against that backdrop of more tension than cohesion that the following undisputed facts ought to be considered. MHI hired a man a few years ago, part of who’s de facto job description was to recruit MHARR members into MHI.

Clayton and Cavco have in recent years both purchased companies that are MHARR members.

Is the trajectory of MHI’s and their larger members’ efforts to eliminate MHARR? 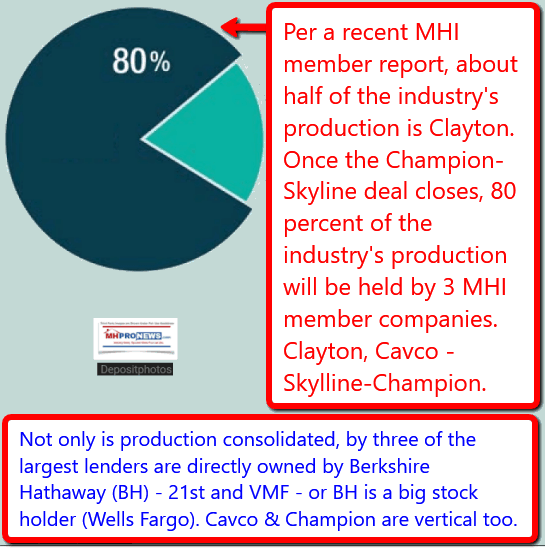 It is against that brief history that Secretary Carson must consider the internal political minefield of manufactured housing.

On the one hand, manufactured homes are just as “amazing” as Dr. Carson said.

The regulations and “guidance,” most notably during the Pam Danner era, have been just as “ridiculous” as Secretary Carson told that Senate oversight hearing, as the video above attests.

If MHI wanted to get along with the industry voices that don’t agree with them 100 percent of the time, logically the Arlington based group would only need to do is what it did at times when cohesion existed.  Namely?

MHI can posture beautifully, but it is their actions – not words alone – that must be the focus.  Their members are buying up, and they are actively recruiting MHARR members.

There are MHARR members, and some in MHI, that believe that Pam Danner came to be HUD’s MH program administrator as part of a specific MHI team member’s efforts.  If so, that means those  “ridiculous” excesses are courtesy of one or more MHI staffer’s efforts.

•   Danner was removed from the program a few weeks ago

•   Lois Starkey was dismissed from HUD,

•   and Danner’s overzealous and “ridiculous” regulatory burdens were put on hold by Carson and the Trump Administration,

an opportunity for a new beginning exists. What will happen next?

Absent trust and cohesion between

In finance, or production, in or out of manufactured housing, there is a simple principle at work.

The heavier the regulations, the harder it is for smaller companies to compete against larger ones.  The following third-party research illustrates the point. 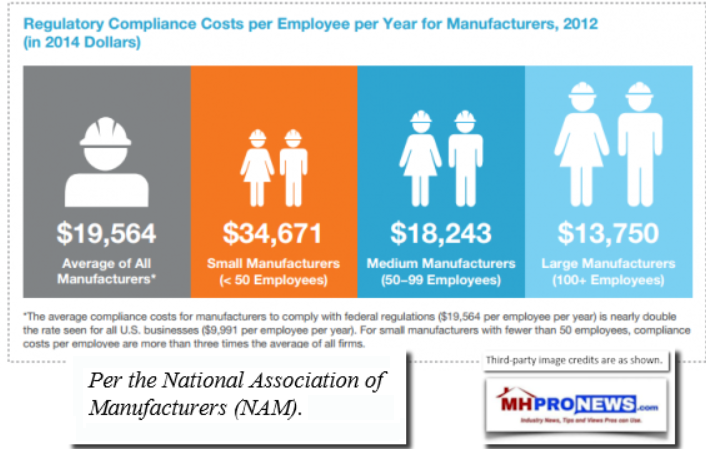 While MHARR was audibly protesting Danner’s work – and sought her removal from the MH program – by contrast, MHI went through various gyrations that did all — save ask for Danner’s removal.  Odd?  Or shadow boxing?

Let’s consider that as consistent with MHI’s apparent and alleged goal of acting in ways that are more burdensome for smaller companies (see Related Reports, linked at the end, below).

This is why CFED’s Doug Ryan accused Berkshire Hathaway (BH) of having monopoly power in manufactured housing over financing. While MHI all too often fails to respond to negative media, in that case their SVP Lesli Gooch leapt to respond and defend Berkshire brands in manufactured housing. By doing so, the Arlington association reflected anew who’s interests there dominate.  Yet the fact remains, that 3 of the 3 largest MH lenders are owned outright by BH – 21st Mortgage Corp and Vanderbilt Mortgage and Finance (VMF), or they have a large stake in their company (Wells Fargo).

When Democratic Congressional reps target Berkshire Hathaway and MHI – also using the words “near monopoly” – it should make CFPB, more in Congress, leadership at HUD and others in the Trump Administration stop and think.

Nonprofits, President Trump, and political voices across the left-right divide are calling “foul” with regard to giant companies dominating and pushing around smaller ones.

From as far left as the Nation to as far right as Breitbart, the issue of monopoly has been raised. The Nation specifically cited Warren Buffett’s Berkshire Hathaway and Clayton Homes.

It’s no secret that Buffett opposed Trump in 2016, by strongly supporting the candidate – Secretary Hillary Clinton – who favored the continued use of heavy regulations.

How many see various movements at work nationally, and in the halls of Washington, D.C.?

The fact that many inside and outside of manufactured housing have raised similar concerns and issues about monopolistic power ought to be carefully considered by members of Congress and the Trump Administration.

Secretary Carson and the HUD team have a unique opportunity to reenergize the “amazing” manufactured housing industry in several ways.

That would achieve some of what advocacy groups desire: raising more people out of poverty using modern manufactured homes.

Save tax dollars, give more people a leg up. Learn more in the related research reports, linked below. ## (News, analysis and commentary.) (Third party images are provided under fair use guidelines.)

“Kevin…the Problem of Your Industry…”