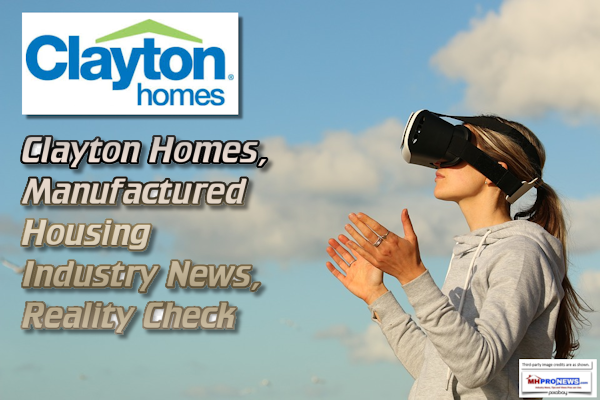 Clayton Homes made the news several times in recent days. As a heads up to readers, this mentions legislation, but that isn’t the headline topic. The example that follows exemplifies a reality check that will tee up an “Aha! Moment” for many.

The subjects Clayton Homes has been included in mainstream media reports included such topics as their support for the amendment proposed to S. 2155. That amendment is based upon the Mortgage Loan Originator (MLO) rule proposal found in the Preserving Access to Manufactured Housing Act. That’s fine.

The point? What’s the Reality Check?

That said, why doesn’t Clayton routinely go after each and every example of mistakes made in the mainstream media about manufactured homes? 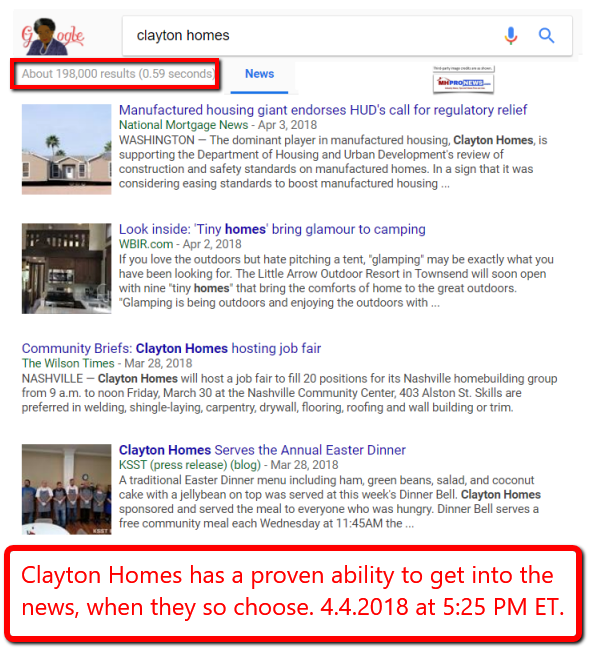 •   As one of the nation’s largest home builders, Clayton could correct each and every example of mistaken reports in the media.

•   Clayton has their own communications and marketing people.

Clayton, MHI and Berkshire Hathaway can comment on – or correct the record on – any misleading, mistaken, bad terminology – – anything! – – associated with the industry.

Will anyone seriously question that claim?   Please, send me a response that explains this topic in some other logical fashion.

Given that premise, that Clayton/MHI could correct any or every flawed media report, how about this question. Why don’t they do so?

For over a year, we’ve done a periodic test. It’s this.  We’ve contacted mainstream media about a problematic news report about manufactured housing that they ran. We ask, has Clayton, MHI or others in the industry contacted you about this? In essentially every case, the answer has been “no.” One example was in Clayton’s home state.  The routine answer was, no, they’ve not reached out at all. (The exception was the Urban Institute, where Clayton and MHI were promised anonymity, per informed sources at UI – see that, linked as a resource below.)

In interview and discussions with home owners and professionals, concerns about being stigmatized by the term “trailer trash” ranks high. It’s a reason millennials have given for not even considering a “mobile homes” – manufactured homes – as an option (see related reports, linked below).

Image and misleading information directly or indirectly costs the industry hundreds of thousands of new home sales per year.  That’s billions in sales a year.

Why doesn’t Clayton and MHI go aggressively after that improper media reporting and terminology issue? Not with more lame advertorials, which industry statistics prove beyond a doubt failed to move the needle for the industry.

I asked Darren Krolewski during the Tunica Show why the millions who watch a classy Clayton video, or who visit Clayton’s or MH Village’s websites aren’t buying more homes?  Krolewski said publicly and privately, he doesn’t have a good answer.

We do. A big factor can be summed up with improper information and image. Pretty pictures and videos alone will not fix this. What will? We know this from experience in the field with clients.

Correcting the record, time after time, lifts the industry’s shoppers from interest to buyers.

Now I happen to believe that Warren Buffett, and Kevin Clayton are intelligent people. Tim Williams said it himself. There’s a good case to be made for correcting the record each and every time.

Sir Arthur Conan Doyle, famous for the Sherlock Holmes detective stories, famously observed that when you eliminate the possibilities, whatever remains must be the truth.

Kevin Clayton said over 6 years ago that they were “ready” then to do an image/public relations campaign.

They can get in the news when they want to do so. Why don’t they fix this?

As a state association executive told me today, MHI has a full time media person that could make that routine outreach whenever negative, inaccurate news hits.

Then why don’t they do so?  Here’s the answer to that, the plausible premise…the Reality Check…

Isn’t this stating the obvious? That’s the reality check. They can get in the news.  They can correct poor reporting, every time, if they wanted to do so.

Clayton and MHI are not responsible for every piece of bad news that hits the media each and every week. But they are 100 percent able – and thus, responsible – for not doing all that they can to fix bad reports when they occur.

Their failure to do so is part of what keeps the industry suppressed. It logically keeps the prices paid for buying the factories and retail centers of others lower than they otherwise would be.

We can call this an allegation that manufactured housing is struggling due to the apparent failure of Clayton, Berkshire Hathaway and MHI to act.

Or we could say the obvious. They have the resources. They know the need. Tim Williams admitted the logic of correcting the record in writing to MHProNews.

The level of acceptance of manufactured housing is directly tied to this issue. Others like financing also have Clayton, Berkshire and MHI finger prints on them as to why they are unresolved (see related reports for details).

Don’t they obviously the MH Industry to remain small, until they’ve consolidated enough that they take their foot off the brake peddle? Isn’t that the reality check for today?  The truth that’s hiding in plain sight? “We Provide, You Decide.” (C) ##

“Kevin…the Problem of Your Industry…” 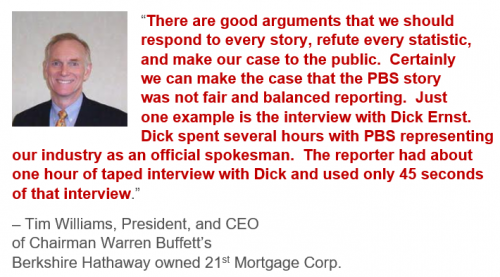 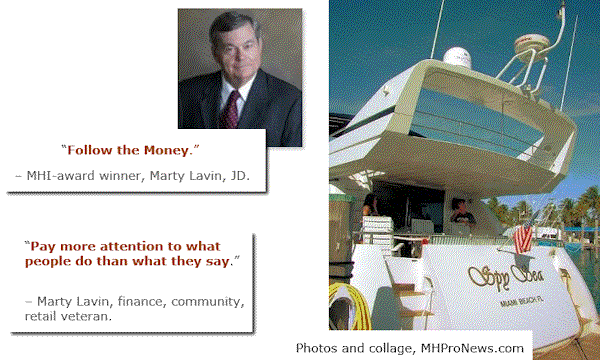 (Third party images, cites are provided under fair use guidelines.)