Perhaps no other industry which has a product that boasts 22 million daily users is as misunderstood as the Manufactured Housing Industry in 21st Century America.

At the Tunica Manufactured Housing Show, Darren Krolewski exemplified the problem, when he told attendees that they can ask some adult about a “manufactured home,” and they often have “no clue what that means.”

Krolewski is not alone in that experience.

Part of that misunderstanding can be captured in the irony – the tragedies – illuminated in the routine misuse by media or others of the words, “trailer house,” and “trailer park.”

For millions, those words are synonymous with “trailer trash.” Not many want to be thought of as trailer trash, one of the last acceptable put-downs of the 21st Century. After interviewing many, often on video, it is clearly an emotional trauma for them.

When tens of millions of potential buyers don’t understand the manufactured home product, of course it’s acceptance as a mainstream form of housing is compromised.

There are opportunities that can arise from that understanding. But to tap them, one must take a fresh look, and begin by clearly grasping the cause before the cure can be understood, or applied.

MHVille’s “Trailer House Trauma” is not the only explanation why so relatively few manufactured homes are being sold today, but it is one of them.

If you’ve ever watched the Lucy and Desi comedy movie, “The Long, Long Trailer” then you realize that when you flashback in time to the early 1950s when that film was produced, it was often upscale people who bought a mobile home or ‘trailer house.’

The reason it was called a ‘trailer’ is because it could be pulled behind many a car, or pickup, as is often demonstrated in the movie.

Note in the chart below how high the sales levels of mobile homes were in the 1950s through the early 1970s?

Image and understanding aren’t everything, but they are a key part of acceptance.

There was a bigger bloodbath in conventional housing’s varied meltdowns, the most recent and memorable one being the bubble that burst in 2008. Conventional and other lending came back for mainstream homes, why not for manufactured homes?

Part of the reason the Duty to Serve (DTS) Manufactured Housing, rural, and undeserved markets was passed by Congress in 2008 was precisely the “poor paper” image that manufactured home chattel loans unfairly represented. Some independents in the industry realized that they needed Congress to act, to force federally chartered Government Sponsored Enterprise (GSE) lenders to support America’s most unsubsidized form of affordable home ownership.

After all, isn’t it discriminatory to robustly support mainstream housing, and not give equal opportunity for supporting manufactured homes?

But another issue for manufactured housing in the 1990s was the brewing “image issue.”

It was exacerbated when President Bill Clinton’s advisor James Carville, as a red herring on that administration’s simmering sex scandals, quipped “Drag a $100 bill through a trailer park, you never know what you will find.”

Carville’s calculated comment was a clearly bigoted, prejudicial statement that targeted the millions of Americans living in pre-HUD Code mobile homes and post-code manufactured homes (MH) — and by extension — the industry that serves them.  Not addressing the slander was arguably a mistake.

In the 1990s, the RV Industry – which began to separate from the MH industry during the mobile home (MH) era – launched and sustained since then their “Go RVing” image campaign. The manufactured housing (MH) tested marketing campaigns at times and regions, like ones done in California, or the Pacific Northwest. But those efforts were not sustained. Nor was there ever a coordinated, national MH campaign in the days when the industry’s producers were flush with cash.

So, the RV production chart reflects the fact that towable and motorized recreational vehicles (RVs) outsell manufactured homes today by more than 5 to 1. Yet RVs cost far more per square foot than even the higher priced manufactured homes. RVs are for most a luxury item, with many RVs not necessarily used for full-time living.  To rephrase, the Go RVing campaign has worked.

But that doesn’t imply that the same would work for manufactured housing.  That said, doing nothing is also not acceptable.

RVs are but one reminder than manufactured housing (MH) is nowhere near its potential. 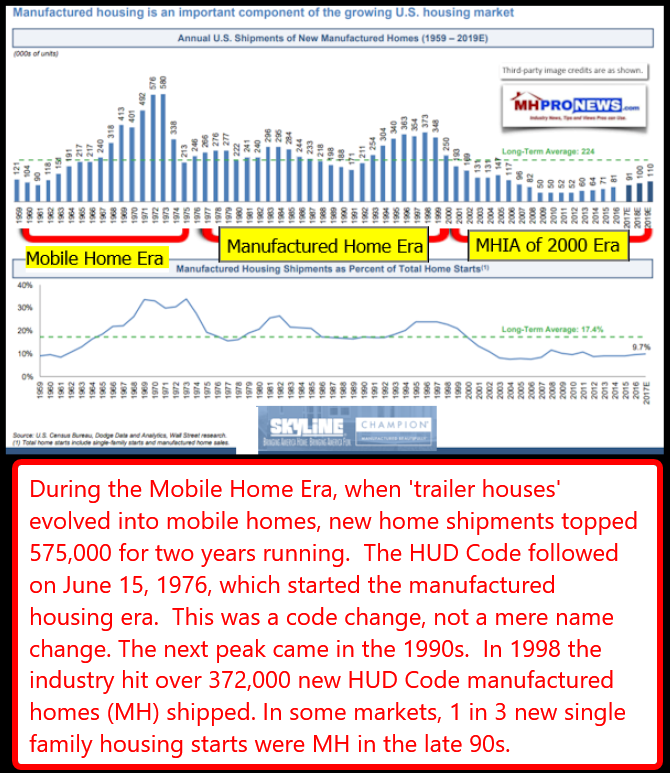 “Me Too?” Cures and Opportunities Begin with Understanding

Former Clayton manager and retailer, Ken Corbin told MH professionals in Tunica, “don’t be a me too” seller in the manufactured home industry. To be more successful than others, one must stand out from the crowd.

Ken’s correct on not being a “me too” point — if greater success is the goal — then Ken’s point is true.

But more than that, one must first understand the causes of what’s kept manufactured housing rising since 2009, but still at historically low levels. It’s common sense that the cure comes after a proper diagnosis and treatment.

This article looks at measurable data points and troubling facts that almost no one in the industry today mentions, much less addresses.

The “Trailer House Trauma” is far from the only challenge, but it is a real one.  Those willing to stand out from the pack are those who are willing to do the research or hire the talent needed to gain a similar understanding that successful investors like Warren Buffett have routinely done.

Give the man his due, Buffett does his home work.  He says he reads 5 to 6 hours a day.

This is part one of a periodic series on the true state of the manufactured housing industry after the first quarter of 2018.

Some related data points and reports are found linked after the Related Reports header, further below.

As a closing note for today, while being “misunderstood” and the “Trailer House Trauma” is a problem, but it’s also an opportunity in disguise for potentially hundreds of industry companies of all sizes.

Manufacturers, retailers, communities, lenders, vendors and other service providers are all able to benefit from the proper localized, targeted marketing and customer engagement approaches.  Those methods must be based upon reality, as opposed to wishful thinking.  They must be sustainable, or else they will fail.

Hundreds of thousands of affordable homes are needed every year in the U.S. What other sector of the multi-trillion-dollar housing industry has so much upside potential?  Can you name any?

RV and National Association of Realtors ™ (NAR) data are clear indicators that with the proper capital, planning, team, motivation, and execution, manufactured housing industry professionals can turn their own image around on a localized basis.  RV dealers and real estate firms invest in their success.  Half a million RVs in 2017, plus over 5 million resale housing units for the NAR in 2017 are proof that it pays off.

Case studies our consulting operation has done with those who put in the effort and resources have seen solid, positive results. To learn more, note the second related report, linked below. ## (News, analysis, and commentary.)

(Third party images are provided under fair use guidelines)

By L.A. “Tony” Kovach to the Daily Business News for MHProNews.com.