Wouldn’t it be refreshing if certain folks in Arlington, VA made an admission like the headline confession Heritage’s Edwin Fuelner made on camera? But, the focus for this evening’s market report isn’t that, rather, it is two-prime points. General economy/jobs, and the under-reported internal struggles in China over the trade troubles with the U.S. 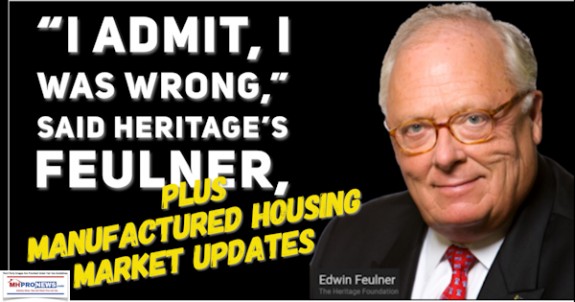 Can you visualize a certain president in Arlington turning red-faced, if he had to make a public admission or error, as Heritage Fuelner’s founder freely made on-camera in the first video below?  For his colleagues, here’s a tip. Credibility grows when admissions – attornment, and amendments – are made.

Accountability is desired in business, and with the typical professional organization too.  But the focus, tonight as noted, is two-fold.

The mission of The Heritage Foundation is to formulate and promote conservative public policies based on the principles of free enterprise, limited government, individual freedom, traditional American values, and a strong national defense.”

Like many non-profits in D.C., Heritage has access to reports and resources that thousands of modest sized businesses do not.  So, Fuelner’s take on these economic issues should be of interest to many.

Near the end of the video above is his confession on China, which makes a good segue into the following.  Fuelner now sees that issue differently than he did in the past.

But it isn’t just a growing number of policy wonks in Washington or Wall Street that are beginning to see the mid-to-long-term wisdom of the Trump Administration’s policies.

Inside Communist China, in our curated topical selections tonight, CNBC reports that pressures are mounting inside China regarding the tariffs and trade issues with Team Trump.

“A growing trade war with the United States is causing rifts within China’s Communist Party, with some critics saying that an overly nationalistic Chinese stance may have hardened the U.S. position, according to four sources close to the government.

President Xi Jinping still has a firm grip on power, but an unusual surge of criticism about economic policy and how the government has handled the trade war has revealed rare cracks in the ruling Communist Party.

A backlash is being felt at the highest levels of the government, possibly hitting a close aide to Xi, his ideology chief and strategist Wang Huning, according to two sources familiar with discussions in leadership circles.”

There were also more signals today that the U.S. and the E.U. are moving toward the goals stated, reported on the Daily Business News in late July at the link below.

Other related reports to the trade issue are as noted.  It should be mentioned, that some production centers for U.S. factory building operations reportedly use some Chinese imports.

Manufactured Housing Weed-Eating – Is Our Industry and Nation in Calm Before the Storm? Plus, Sunday Weekly Headlines Review Reflections