The HUD vs. Facebook case just announced is what it is.  But is there a signal from the Trump Administration implied here for monopolistic players too? That question won’t be answered today. But with so many marketers in MHVille who use Facebook, we will look at the breaking news in our featured report this evening. 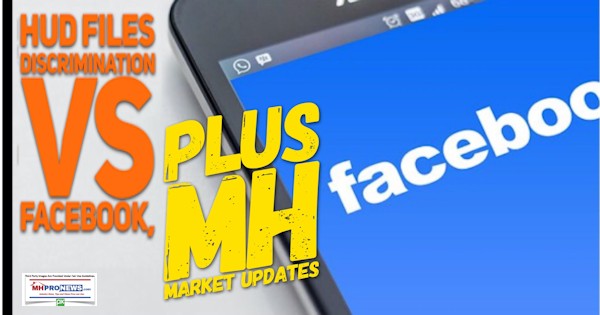 It’s the 50th anniversary of the Fair Housing Act, and HUD is flexing its muscles.

In a release to the Daily Business News on MHProNews, HUD says as follows.

WASHINGTON – The U.S. Department of Housing and Urban Development (HUD) announced today a formal complaint against Facebook for violating the Fair Housing Act by allowing landlords and home sellers to use its advertising platform to engage in housing discrimination.

“The Fair Housing Act prohibits housing discrimination including those who might limit or deny housing options with a click of a mouse,” said Anna María Farías, HUD’s Assistant Secretary for Fair Housing and Equal Opportunity. “When Facebook uses the vast amount of personal data it collects to help advertisers to discriminate, it’s the same as slamming the door in someone’s face.”

For example, HUD’s complaint alleges Facebook’s platform violates the Fair Housing Act. It enables advertisers to, among other things:

Ø    display housing ads either only to men or women;

Ø    not show ads to users whom Facebook categorizes as interested in “child care” or “parenting,” or show ads only to users with children above a specified age;

Ø    to display/not display ads to users whom Facebook categorizes as interested in a particular place of worship, religion or tenet, such as the “Christian Church,” “Sikhism,” “Hinduism,” or the “Bible.”

Ø    not show ads to users whom Facebook categorizes as interested in “Latin America,” “Canada,” “Southeast Asia,” “China,” “Honduras,” or “Somalia.”

Ø    draw a red line around zip codes and then not display ads to Facebook users who live in specific zip codes.

In addition, today the U.S. Attorney for the Southern District of New York (SDNY) filed a statement of interest, joined in by HUD, in U.S. District Court on behalf of a number of private litigants challenging Facebook’s advertising platform.

The Secretary of HUD may file a fair housing complaint directly against those whom the Department believes may be in violation of the Fair Housing Act.  Secretary-Initiated Complaints are appropriate in cases, among others, involving significant issues that are national in scope or when the Department is made aware of potential violations of the Act and broad public interest relief is warranted or where HUD does not know of a specific aggrieved person or injured party that is willing or able to come forward.  A Fair Housing Act complaint, including a Secretary initiated complaint, is not a determination of liability.

A Secretary-Initiated Complaint will result in a formal fact-finding investigation. The party against whom the complaint is filed will be provided notice and an opportunity to respond. If HUD’s investigation results in a determination that reasonable cause exists that there has been a violation of the Fair Housing Act, a charge of discrimination may be filed. Throughout the process, HUD will seek conciliation and voluntary resolution.  Charges may be resolved through settlement, through referral to the Department of Justice, or through an administrative determination. ##

“Work With Us Or Die,” Threat from Facebook’s Brown, per SUN Report