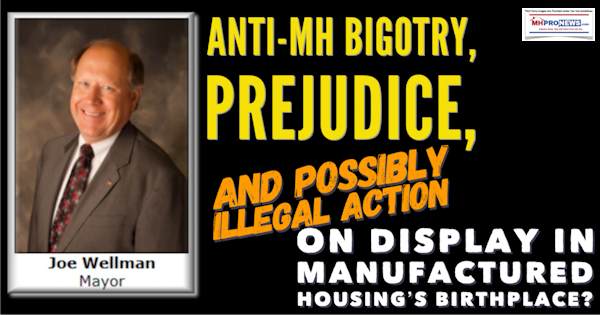 Indiana in many ways was the ‘birthplace’ of the RV and MH industries. Recreational vehicle (RV) production is still robust in Indiana.

Manufactured homes are still built in Indiana too.  But production of manufactured homes has become more diversified.  States like Texas and Alabama far outproduce Indiana.  Oddly – given the industry’s deep history in the state – manufactured housing is often met with resistance and disdain by local jurisdictions, in the very state where the industry was ‘born.’ 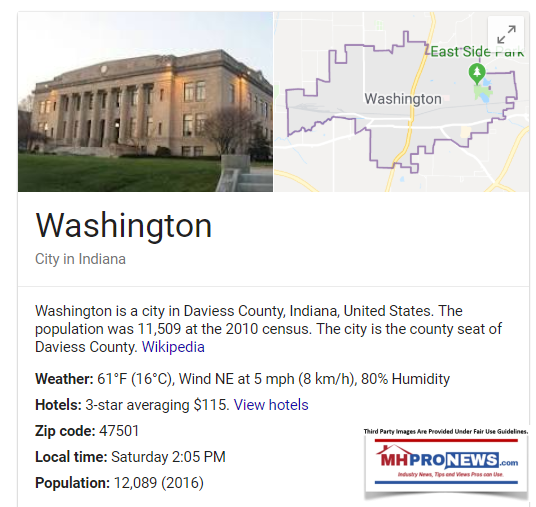 Against that backdrop is a recent report from Washington, IN.  The town of some 12,000 is located in the southern part of the state. Their city council is working on an ordinance that targets manufactured homes (MH), which local media and public officials are inaccurately calling ‘trailers’ or ‘mobile homes.’

There are reportedly two ordinances involved:

“We have received some concern from the Board of Zoning Appeals and the city Plan Commission about dilapidated trailers1 in the city,” said Mayor Joe Wellman, per the local Washington Times Herald. “Not so much those that are owner-occupied but those that become rental trailers1 and deteriorate rapidly.”

“We’ll grandfather in trailers1 that are rentals at the end of the year,” the town’s mayor said. “After that each time a tenant moves out, in order to continue to keep that trailer1 there, would require an occupancy inspection and a certificate for occupancy.”

“There is a sizable problem with rental trailers1,” said Mayor Wellman. “I don’t think we have a definitive number, but the number thrown out indicates at least a couple of hundred rental trailers1 in the city.”

“We passed an ordinance about a year ago that if you bring one in it needs to go into a mobile home1 park,” stated Wellman. “The city is trying to be cognizant there are some that are owner-occupied that are in good shape.”

“I would say, even if they are rentals, and the owner keeps the place up and makes it a good, safe place to live they will be able to rent them,” opined Washington, Indiana’s Mayor Wellman. “It will just require an inspection and certificate of occupancy.”

Local media said that the ordinance will be up for adoption at Monday night’s city council meeting.

There are several potential issues that this raises.  The tone of the comments could reflect a bigotry or prejudice against manufactured homes and/or their occupants.

There is no similar description of conventional housing in the local news report.

MHProNews has already and plans to further contact association, attorneys, and other officials – including, but not limited to – the town of Washington, IN, and at the federal level.  Stay tuned. See related reports, linked below. “We Provide, You Decide.” ©  ## (News, analysis, and commentary.)

1.    Terminology error – the word ‘trailer’ is in the original. It is unclear from the article if these are mobile homes, post-HUD Code manufactured homes, or a combination of both.

The Mississippi Manufactured Housing Association (MMHA) was very encouraged when HUD sent the City of Richland a letter regarding their requirement to home owners to update their manufactured homes to the current HUD code standard. MMHA had requested such letter in April of 2012 and received a response in August of 2012.