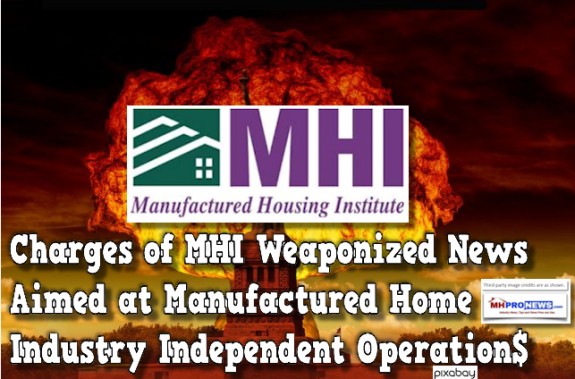 “…the Senate Banking Committee passed legislation to clarify that a manufactured housing retailer or seller is not considered a “loan originator” simply because they provide a customer with some assistance in the mortgage loan process,” said a “Housing Alert” from Manufactured Housing Institute (MHI) to their members, and through them, to others in the HUD Code manufactured home industry.

“This is a key tenet of S. 1751, the Preserving Access to Manufactured Housing Act, which excludes manufactured housing retailers and sellers from the definition of a loan originator so long as they are only receiving compensation for the sale of a home,” said the MHI alert.  That is a reference to the so-called MLO rule.

“The language was passed as a part of S. 2155, the “Economic Growth, Regulatory Relief and Consumer Protection Act,” which is a package of reforms intended to improve the national financial regulatory framework and promote economic growth. S. 2155 was passed by the Senate Banking Committee by a bipartisan vote of 16 to 7,” per MHI.

“For many hard-working Hoosiers and Americans, manufactured housing provides the most affordable option available when they look to buy a home. I’m pleased the bipartisan regulatory relief legislation that I helped craft and that passed the Senate Banking Committee includes a provision based on my Preserving Access to Manufactured Housing Act. This measure would help prevent federal regulations from getting in the way of financing that families need as they step into homeownership,” said U.S. Senator Joe Donnelly, per MHI’s statement.

Accepting all of the above at face value, what the MHI release completely fails to mention is that per sources within MHI – as well as from non-profits familiar with the matter – the MLO rule could have been changed by an agreement years ago.

While supporting the Preserving Access measure in principle, MHProNews and our parent company’s management believes that no deception or misleading statements are needed to pass that or any worthwhile bill, or to motivate the honest, hard-working members of the MH Industry to act.

The Daily Business News and MHLivingNews have historically held accountable the non-profit groups for their own errors – see the examples linked in the reports, below.

Why would a federal agency and a nonprofit think tank, both dedicated to consumer protection, choose to pursue a course that is diametrically opposed to their mutual mission? The Center for Enterprise Development (CFED) and the Consumer Financial Protection Bureau (CFPB) have staunchly supported manufactured housing as an important component of affordable housing for low- to moderate-income families.

The truth matters. Manufactured housing has enough unjustified black-eyes, without having to give itself avoidable ones, at the hand of one of its own associations.

“It can be understood as technically accurate, but misleading MHI Housing Alert. It’s arguably a half-truth that is deceptive, and manipulative of their own members,” alleged award-winning industry veteran L. A. “Tony” Kovach in a comment about the most recent controversial contentions regarding the Arlington, VA based trade association.

“For a number of years, MHI’s current leadership have engaged in debatably deceptive messages sent to their own members. These messages have at times been like their most recent one. A half-truth, with the unstated facts MHI ought to be aware of not being mentioned in their allegedly weaponized ‘housing alerts’ at all,” Kovach said in comments about the most recent MHI housing alert.

“Its tips from other [MHI] members, and/or information obtained directly from MHI staff, that has led to a periodic series of revelations that are arguably harmful to the industry, and is damaging to the reputation of MHI.  That in turn can be construed as harmful to the industry they claim to be acting for in Washington, D.C. They are solely responsible for the harm they are causing to the industry their members, and their own reputation when they engage in allegedly deceptive practices, that they have yet to formally address,” said Kovach, who is a managing member of Lifestyle Factory Homes, LLC – the parent company to MHProNews.

“We’ve offered to publicly discuss or debate via video these concerns. We’ve given MHI numerous opportunities to respond in writing,” Kovach said. “They’ve routinely failed to take advantage of those opportunities. If they were correct in their methods, wouldn’t they want to defend their accuracy and reputation?”

Their Own VP Said It Preserving Access, Wasn’t Happening

MHI’s own vice-president said in writing in a prior on-the-record statement to MHProNews that the odds of passing Preserving Access where long ones under the Obama Administration.  See that Daily Business News report, linked below.

Partially as a result over concerns that MHI is not properly representing their independent retail, community and other members, there are numerous voices and third-party efforts underway which aim to create a new association that will represent them.

As MHProNews first-reported to the industry, Maxine Waters and other congressional Democrats have recently characterized MHI as being a puppet for the benefit of Warren Buffett’s Berkshire Hathaway manufactured housing brands.

In her official statement – found as a download, from the article linked above – to the House of Representatives, she named:

In a prior letter by Waters and some of her congressional colleagues to the Department of Justice (DoJ), and the Consumer Financial Protection Bureau (CFPB), she called Buffett’s manufactured housing interests as a ‘near monopoly.’

That ‘near monopoly’ and related letter by Waters and others is a download from the Daily Business News report linked below.

A Question of Time?

It may only be a question of time before members begin to cancel their MHI membership, realizing – as one MHI award winner told MHProNews – that the largest companies have learned how to get the small-to-mid-sized companies to pay for what the ‘big boys’ want.

The ‘fear’ over retaliation, or cutting members out of certain alleged ‘benefits’ of working with MHI and the industry’s largest companies, are reportedly keeping a number of companies on board with MHI.

Warren Buffett himself has reportedly said that

are hard to break. See that detailed report, linked below.

While failing for over 5 years to accomplish their own primary goal, the industry is continuing to consolidate.

Sam Zell, Frank Rolfe, and Kenny Lipschutz are among the MHI members who have publicly critiqued MHI, either pointedly, or politely.

Is the truth of an important element of what is holding hiding in plain sight?

What is hard to argue is that MHI has repeatedly failed to do what their affable, popular prior chairman, Nathan Smith, said that the association needed to be.  Pro-active, vs. reactive.

Note 1: Thousands get it. For those industry pros, investors, and MH advocates who want to sign up to the manufactured home industry’s leading headline news/updates – typically sent twice weekly – please click here to sign up in just seconds.